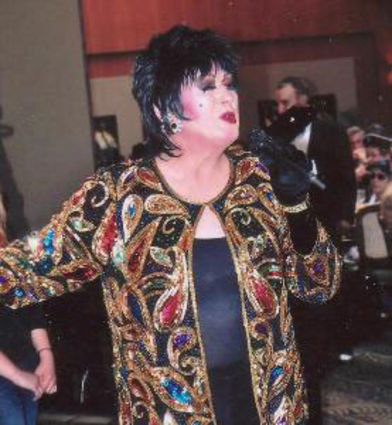 This native New Yorker recently returned from Chicago where the temperature was in the 60s and the natives were wearing shorts and t-shirts, flip flops, and some even wore swimsuits! (I had to borrow a jacket to wear over my sweatshirt!)

Of course, when my plane landed back in Orlando, I faced the mid 90s and a lot of humidity. (I’m living here almost 49 years but will never get used to the extreme heat… yuck!)

The trip to Chicago was purely for pleasure… not performing. I got to spend time with and enjoy my grandchildren. I was extremely proud of my grandson, ZACH, 10, an artist and magician, and my granddaughter, LAUREN, 13, who, incidentally, took 2nd place in the 200 meter I.M. (She is a swimmer on the Flying Fish team in an Olympic sized pool at the Evanston, Ill., YWCA.

(I am able to swim 4 laps in my home swimming pool! When I told that to Lauren, she laughed… but why? Her reply was “because you’re old, Grandma!”)

It’s great to be back home in spite of the horrible heat and humidity, but my traveling days are far from over.

I will be in Las Vegas at the end of July, then back to Chicago before the Jewish holidays in September and in New York City in October.

I promised a reminder…

On Sunday, June 23, we are “invited” to have “Afternoon Tea With The Divas.”

All decked out in magnificent costumes, the gals… oops… guys… will perform posing as well known entertainers.

This all happens at the Jewish Community Center of Greater Orlando, 851 N. Maitland Ave., Maitland.

The cost of admission is $25 at the door; $20 in advance, which includes a buffet and two glasses of wine or beer.

A few months ago, I mentioned a new Orlando pianist named RICHARD RIES, who at one time, worked here at the Heritage.

Happily (because his talent should be shared), Richard can be heard playing piano for “Happy Hour” any Thursday or Friday at Tiffany’s, 505 N. Park Ave., Winter Park.

Richard entertains with his marvelous skills at the piano between 5 and 7 p.m. There are appetizers (it’s always about food with me) that are scrumptious… homemade potato chips, baked brie with honey and almond glaze… yum!

What’s particularly wonderful is that the appetizers are free at “Happy Hour.”

I recently received this emotional email from LAURA DILL. I was very touched by it and hope that I, too, will leave cherished memories for my grandchildren someday. I pass it along to you:

“There are many people who have influenced me in my life, but the one that has made the biggest impact would have to be my grandpa.  He has made me the person I am today.  My grandpa has had the most amazing history and with all the troubles that he has come upon, he became one of the strongest people I’ve ever known.  In the early 1900s he came to this county from Lithuania. As a Lithuanian Jew, at the age of 6 when his small village was invaded by the Russians. He, his mother, brother, and sister had to escape within 24 hours or they would be killed. Through a long 2 years of hiding underground, sickness, and long journeys everywhere from Japan, to San Francisco, to Boston. He finally made it to what the refugees called ‘The Land of Opportunity.’

“What’s even more amazing is that my grandpa never heard the sound of music until the age of 8.  He heard music coming from his neighbor’s house, and this was the most beautiful sound he had ever heard.  It was then that he took violin lessons and became one of the best and youngest violinists ever at 16 to play solo under the world-famous conductor Arthur Fielder, in the People’s Symphony at Symphony Hall. As he was being trained for the People’s Symphony, he one day went to his brother’s upholstery shop and made a comment to his brother that the chair he redesigned was the ugliest chair he had ever seen. His brother then said, ‘What could you do to make it better.’ My grandpa redesigned the chair on paper by sketching out his idea, and this chair became so popular that it was sold by the thousands. His brother said, ‘Can you do this again?’ It was then that they realized he was not only an artist but an extremely gifted furniture designer with only up to an 8th grade education. He became one of the most popular custom-made designers in all of the Northeast. His work became so known, that movie stars such as Barbara Stanwick and Robert Taylor, would only buy his furniture. He also had furniture in the White House, and his displays of his furniture have been on the cover of magazines, including Life.

“He invented many furniture pieces such as the telephone table that became very popular throughout the U.S. in the 1950s.  Harvard professors and architects would come to him for advice as he knew more than ‘the books,’ could ever teach them.  He proved that smartness is beyond the books, it’s about life experiences and intuitions. Often his designs and inventions came through his dreams. He was a true genius and respected and loved by everyone. So it was then that he gave up music, as the furniture business was much more prosperous, and he had three children to support.  It’s not just about money though, it’s about passion, he taught me.  He loved his work and inspired me by always telling me to ‘Reach for the top and that you can always step down.’ He was so positive and such a loving man.  He was very giving, had an amazing sense of humor and contagious laugh.

“The many who knew him always said a book or documentary should have been written about his life in Lithuania, as he came from a poor village, escaped and rose to the top. He passed away at 97 years old, but his legacy will stay with me forever!”

(Gee Laura, I wish I had had the opportunity to know him.)

This tribute ran in my recent FED FRIDAY email from the Jewish Federation:

“The Jewish community mourns the passing of U.S. Sen. Frank Lautenberg of New Jersey, a giant of the Senate and former United Jewish Appeal chairman, who died at age 89. (UJA was one of the forerunners of Jewish Federations of North America.)   Sen. Lautenberg was a longtime Jewish communal leader on the national and local levels. He became the youngest chair in history of UJA, at age 50, and was a longtime president of the Jewish Federation of Greater MetroWest, N.J., where a building is named in his honor.  Sen. Lautenberg was the Senate’s last living veteran of World War II and its oldest member, serving his fifth term. He was a strong backer of the Jewish Federation system’s domestic agenda.  The senator was a major supporter of maintaining strong relations between Israel and the U.S. He first visited Israel in 1969 and went on more than 100 trips there since. Among his greatest legacies was the Lautenberg Amendment, which allowed Soviet Jews and other persecuted minorities from the USSR to immigrate to the U.S. and helped open the flow of Soviet Jewry to freedom.”

Rabbi Bloom caught two of his rabbinical students gambling and drinking on Sabbath. Next day, Rabbi Bloom called them into his office and asked them what was going on. They immediately confessed to having given in to weakness and agreed that they deserved some form of punishment for their sin. 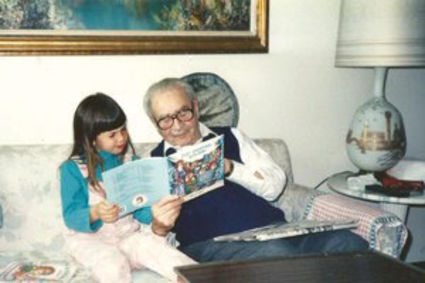 Rabbi Bloom thought a lot about this and then came up with the answer. He bought two bags of dried peas from the delicatessen and told them, “Put these in your shoes and walk on them for a week to remind yourselves how hard life can be when you turn away from God.”

A few days later, the two students met each other in the street. One had a pronounced limp and had dark circles under his eyes. He looked very tired and weary. On the other hand, the other was the same as he had been before.

“Hey,” said the first. “How is it that you are walking so easily? Why didn’t you do as the rabbi asked and put the peas in your shoes?”