More of same or bridge to West? 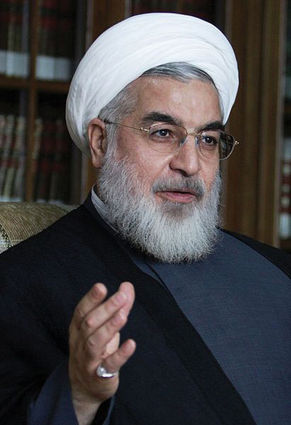 WASHINGTON (JTA)—Former national security adviser, former nuclear negotiator, a decades-old friendship with the supreme leader—Hassan Rohani is as Iranian establishment as it gets.

Which is why, some Iran watchers say, he may be an invaluable asset in the quest to reduce tensions between the Islamic Republic and the United States.

In his first remarks following his election to the Iranian presidency last week, Rohani sustained the moderate image that helped sweep him into office with more than 50 percent of the vote, obviating the need for a runoff against one of the other five candidates.

Rohani, 64, described Iran’s parlous relationship with the United States as “an old wound which must be healed,” according to The New York Times translation of his news conference on Monday, while also defending Iran’s “inalienable rights” to enrich uranium. He intimated, however, that he was willing to make the country’s nuclear program more transparent.

Skeptics were none too impressed.

Israeli Prime Minister Benjamin Netanyahu said Rohani did not present a change from Mahmoud Ahmadinejad, his predecessor who was notorious for anti-Semitic rantings, Holocaust denial and oft-repeated wish that Israel would one day disappear.

Both men, Netanyahu said, emerged from a small pool of candidates selected by a council that answers to Iran’s supreme leader, Ayatollah Ali Khameini.

“Among those whose candidacies [Khameini] allowed was elected the candidate who was seen as less identified with the regime, who still defines the State of Israel as ‘the great Zionist Satan,’ ” Netanyahu said Sunday.

The Obama administration also expressed skepticism, although unlike Netanyahu, it held out hope that Rohani’s moderated rhetoric represented an opening.

“President-elect Rohani pledged repeatedly during his campaign to restore and expand freedoms for all Iranians,” U.S. Secretary of State John Kerry said. “In the months ahead, he has the opportunity to keep his promises to the Iranian people.”

Kerry also repeated his readiness to “engage directly with the Iranian government” to meet Western demands that it make its nuclear program more transparent.

Rohani was born in northern Iran to a religious family that sent him to seminary when he was 12. He went on to earn advanced law degrees at Glasgow Caledonian University and to publish two books in English on Islamic jurisprudence. Until his election he was the managing editor of two scholarly foreign affairs periodicals, in English and in Farsi.

For much of his career, Rohani has been deeply embedded in Iran’s corridors of power. Ten of the 16 entries under “professional experience” in his English-language biography posted on the website of the think tank he has led since 1992, the Center for Strategic Research, detail his security establishment credentials.

During his mid-2000s ascent under the reform-minded President Mohammad Khatami, Western diplomats speculated that Rohani was being groomed for the presidency, noting both his facility for engagement with the West and ties to the conservative establishment and the supreme leader. Rohani is fluent in English, along with several other Western languages, and has an active presence on Twitter.

In his published works, Rohani offers some clues about his views concerning engagement with the West, particularly in nuclear negotiations.

According to Farideh Farhi, a University of Hawaii analyst writing this week on LobeLog, a foreign policy website, Rohani seems to believe that engagement offers more for Iranian security than isolation.

“The foundation of security is not feeling apprehensive,” Rohani wrote in his 2011 book, “National Security and Nuclear Diplomacy,” according to a translation by Farhi. “In the past 6 years”—since the departure from power of moderates led by Khatami—”the feeling of apprehension has not been reduced.”

Western diplomats who led nuclear talks with Rohani in the mid-2000s told reporters at the time that they saw Rohani as someone coming to the table ready to forge deals. It was during Rohani’s term as chief nuclear negotiator that Iran suspended its enrichment of uranium, although talks ultimately foundered over the extent of the Iranian suspension.

Rohani no longer favors such a suspension, but has suggested that he is ready to make Iran’s nuclear program more transparent as a means of lifting Iran’s isolation.

“The best way to characterize Rohani is that he realizes the extent of the crisis facing the Iranian regime due to multiple reasons, but also because of the nuclear program and sanctions,” said Alireza Nader, an Iran policy analyst at the Rand Corp., a think tank with close ties to the Pentagon. “Rohani is not someone who believes Iran must sacrifice everything for resistance.”

During his campaign, Rohani suggested that the price of “resistance” championed by Ahmadinejad and some of the hardliners running against him had cost Iran too much.

It would be nice “that while centrifuges are working, the country is also working,” was one of his slogans, according to Meir Javedanfar, an Iran-born Israeli analyst.

Skeptics emphasized Rohani’s establishment ties, which according to the Times date to 1967, when he met and befriended Khameini on a long train ride.

The Israel Project in its biography of Rohani emphasized that his ascension to the upper echelons of the Iranian government came about through his friendship with Ali Akbar Hashemi Rafsanjani, the country’s president throughout much of the 1990s. It was under Rafsanjani that international terrorism operations and nuclear development expanded greatly.

Khameini, as many have noted, remains the ultimate power in Iran. But Nader said Rohani’s establishment past and the swell of moderates who carried him into office over hardline regime favorites such as Saeed Jalili, also a former nuclear negotiator, could position him as a bridge between the two camps.

“Rohani is not transformative. He is part of the conservative establishment and the national security establishment,” Nader said. “He’s acceptable to both sides, to Khameini and the conservatives and to the reformists. He’s a figure who will try and bridge the gap between the components of the regime.

“This is an opportunity for Khameini to make concessions to change and to save face.”