By 6 degrees no Bacon staff 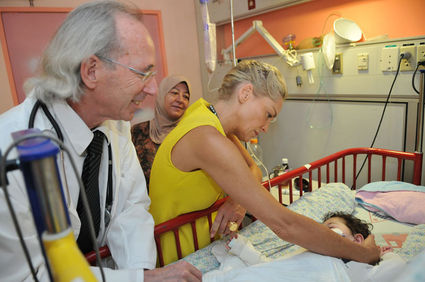 Sharon Stone visits a child June 18 at the Hadassah Hospital in Jerusalem, as Dr. Dan Engelhard, head of the hospital’s pediatric AIDS unit, looks on.

Movie star Sharon Stone, who also came to celebrate Israeli President Shimon Peres’ 90th birthday, stopped by at the Hadassah Hospital in Jerusalem to meet with Israeli and Palestinian children.

What mostly attracted the attention of the Internet community was a photo of Stone next to an Israeli guy wearing a T-shirt with a photo of the famous interrogation scene from the film “Basic Instinct.” The photo was uploaded to social networks and became an instant hit.

The future according to Spielberg

Steven Spielberg is predicting price variances at movie theaters, where “you’re gonna have to pay $25 for the next ‘Iron Man,’ you’re probably only going to have to pay $7 to see ‘Lincoln.’ ”

Spielberg introduced his theory recently in a speech at the University of Southern California. He links it to an “implosion” in the film industry brought on by the flopping of a handful of big budget movies.

The Oscar-winning director shared the stage with George Lucas, who says he believes that Hollywood will soon look more like Broadway, putting out fewer films that stay in theaters for longer periods of time. Spielberg recalled that in 1982, “E.T. the Extra-Terrestrial” stayed on the big screen for a year and four months.

Even for a someone like Spielberg, making movies remains an uphill battle these days. “Lincoln,” he says, almost ended up on HBO. He had to co-own his studio, he claims, in order to get the saga into theaters.

Not that Spielberg has anything against television—or video games, for that matter. He is working on the TV version for the Xbox 360 game “Halo.” Sounds interesting, but we’ll stick with his “Lincoln”-type material, thank you very much (especially if it costs under $10).

Sting will play Poland for the first time at The Life Festival in Oswiecim, the city that was home to the Auschwitz concentration camp. The British rock icon will be performing June 29 with a five-piece band as part of his “Back to Bass” tour.

Festival creator Darek Maciborek, an Oswiecim-born journalist, is seeking to spread messages of peace and tolerance in his hometown. Sting is choosing to make his Poland debut here most likely because of the peaceful philosophy of the event and his involvement with human rights organizations, specifically Amnesty International, participating in the festival.

According to Haaretz, festival organizers had no response when questioned about holding a concert in a space with such a controversial and violent history.

The Red Hot Chili Peppers also were scheduled to perform but reportedly have dropped out.

The Life Festival, in its third year, has featured performances by James Blunt and Peter Gabriel.

Warner Brothers Pictures announced that it was partnering with “Glee” writer Roberto Aguirre-Sacasa and director Jason Moore to bring Archie Andrews, Betty Cooper, Veronica Lodge and the rest of the Riverdale gang  to life on the big screen.

Archie Comics, founded by the Jewish editor and publisher John Goldwater, started publishing in 1942. Animated spinoffs have been produced since the 1960s, and NBC aired the TV film “Archie: To Riverdale and Back Again” in 1990.

Now Goldwater’s son, Jon, is CEO, and hopes to convey a modern “high school” narrative film based off Archie Comics while still appealing to a teenage audience to whom comic books have become exceedingly sparse.

“The idea for this is to capture a very truthful, authentic coming-of-age story with these kids that includes heartache, that includes pain, that will obviously temper the fun and the hijinks,” Aguirre-Sacasa said. “It’s going to be a fun, hopefully, summer movie, but we’re not shying away from the truth and the awkwardness and the growing pains of being a teenager.”

With comics stacked in my attic, and as one who has seen the ‘90s TV movie (twice, not ashamed), I’m greatly looking forward to this film. Nothing describes awkward, young and lovesick better than the Betty, Veronica and Archie love triangle.