Behind the music with rock star Sheldon Low 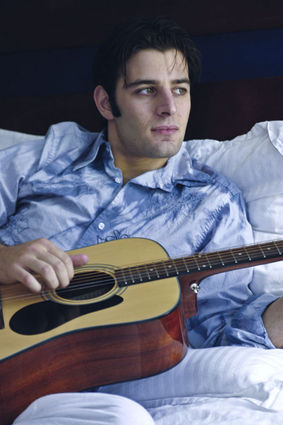 Tall, dark, handsome and a mensch, Sheldon Low is one of Jewish music’s hottest stars. Low’s constant touring of America’s Jewish camps, schools and community centers has won him legions of fans. From preschoolers to teenagers to baby boomers, throngs of Low’s fans rock out to his original compositions and his contemporary interpretations of Jewish songs. The 30-year-old St. Louis native is the artist-in-residence at Temple Israel of the City of New York and has four albums to his credit. He spoke with the Exponent by telephone from his home in Manhattan.

Jewish Exponent: Let’s start with the phrase “Jewish rock music.” When I was a teen, all that we had was Jewish folk music and it wasn’t exactly cool to listen to it.”

Sheldon Low: I also grew up listening to Jewish folk music and while lots of people love it, it did emerge from the ’60s and ’70s and belonged to that generation. Those of us who grew up in the ’80s and ’90s adapted Jewish music through what we listen to, which is rock and pop.

Another difference in today’s Jewish music is the availability of technology. Home studios are now affordable and allow more people to record their own music. That didn’t exist before the late ’90s. Another big technology factor is that the Internet and social media allow us to find audiences and them to find us.

SL: I like the word “repurpose” because that’s exactly how I think of it. I want my melodies to breathe new life into the lyrics, which are thousands of years old and don’t automatically relate to modern life. But the messages really are timeless, so first, I try to get to the core of what the lyrics are conveying.

For “Mi Chamocha,” I imagined what it was like singing that song just after the Hebrews crossed the Red Sea. What would it feel like to stand there and realize that you were finally free? I thought about the parallels between “Mi Chamocha” and newer songs about freedom, particularly Bob Marley’s “Redemption Song” and “Get Up, Stand Up.”

Then I thought about my own experience with freedom. We in America are here because our ancestors, in my case my grandparents, crossed an ocean so that we could be free and live better lives. That makes “Mi Chamocha” very relevant to my life. I wrote the melody to express that.

JE: What’s the inspiration behind your versions of “Shalom Aleichem”?

SL: For one of the versions of “Shalom Aleichem,” I got the melody from a line of music that I heard when I was at my favorite Indian restaurant. I kept singing it over and over, then incorporated it into “Shalom Aleichem.” When we do it live, I ask my drummer to give me a hip-hop beat behind the song and it really pops. The point of that album [“Light Up Shabbat”] was to provide new melodies for Shabbat services. I wanted it to be fun, listenable and music that people would rock out to.

JE: So what’s it like to be on stage surrounded by throngs of teenaged girls? Those girls go bananas for you and so do some of their moms.

SL: Well, let’s not forget that I do a lot of performances with preschool kids. Really, I consider myself an educator. I’m trying to teach kids about music and get them to relate to their Judaism. No matter what kind of concert I’m doing, I try to create moments that will engage the audience musically and Jewishly.

JE: Right. But your image is appealing to Jewish people because you look like a rock star, but you sing our music.

SL: Yeah, I see your point. I do relate to that, because when I was in high school, I had two identities: one inside the synagogue and one with my friends on the football team. Part of that is because so many of our role models were the Woody Allen stereotype. There’s nothing wrong with that, but it doesn’t describe me. So, if I’m part of creating a different image of a Jew and people relate to it, that’s great. To me, it’s about saying that it’s OK to be a proud, hip Jew who loves the religion and the music.

This article originally appeared in Bridges, a Jewish Exponent supplement. Melissa Jacobs is the editor of Bridges. This article was reprinted by permission.