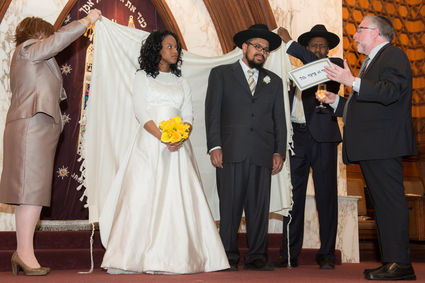 Rabbi Simon Benzaquen recites the sheva brachot at the wedding of Chana and Yosef Brown in Seattle, March 5.

(JTA)—Five years ago he was D-Black, a hip-hop artist rapping about the violence, gang activity and drugs of his African-American ’hood. Today he’s Nissim Black, an Orthodox Jew davening in a Sephardic shul in Seattle and writing songs he describes as rap/urban alternative that “speak a message of hope and inspiration.”

The shift in his musical message will be on full display with his new album, “Nissim,” due for release July 16.

Meanwhile, the changes in his personal life were underscored earlier this year when the 26-year-old musician was one of two grooms in a double Jewish wedding ceremony that became a communitywide project.

The story starts in 2008: Newlywed with an infant girl and then called Damian Black, he found himself at a crossroad after a friend was shot and killed at a nightclub where Black had been performing. Soon after, he lost his day job working with autistic children.

“I had a ton of questions and no answers,” Black recalls. There were questions about “religion, about God, about Christianity, about why aren’t Christians Jewish if Jesus was Jewish.”

Black began researching religion, reading about the Torah and begging his wife, Jamie, to study with him.

But the more she read, the more she, too, found herself attracted to Judaism, ultimately taking the Hebrew name Adina.

“If this is something that can give me answers, I wanted it,” she says, adding that she felt like Judaism, unlike Christianity, welcomed questions. “It’s like a breath of fresh air.”

Adina began urging her younger sister (by 10 months) and best friend, Sheree, to study with them. Nissim and Sheree together pulled in Bradley Brown, Black’s close friend since kindergarten, fellow musician and Sheree’s future husband. They, too, have taken Hebrew names: Chana and Yosef.

By 2010, the two couples—each with two young children—had moved to an Orthodox enclave in Seattle’s Seward Park and were studying for conversion at the Sephardic Bikur Cholim Congregation. Their conversions were finalized with visits to the mikvah, ritual bath, on Feb. 27. As is traditional with a conversion at the congregation involving someone already married, a Jewish wedding ceremony was next.

That’s when the four of them came under the wing of congregant Beth Balkany, who was saddened that each couple previously had had wedding ceremonies with just a handful of guests and no celebration. She was determined to make the couples Jewish wedding celebrations they wouldn’t forget.

“I was really excited to help them,” she says, adding that others felt the same way, often asking her, “How can I help?”

Through the local bridal gemach, a lending resource, Balkany found gowns that required just hems for each of the women. Nissim and Yosef provided a playlist for the DJ. A couple who married the previous day donated their flowers. The caterer donated his time, the photographer hers. Someone contributed money for a videographer, someone else makeup for the brides. 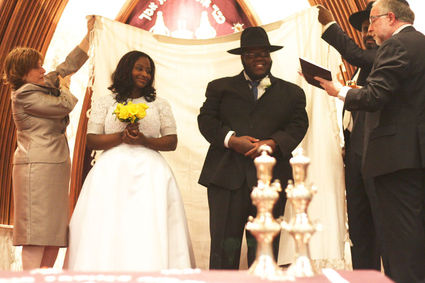 The wedding of rapper Nissim Black and his wife Adina in Seattle, March 5.

“I raised the money to pay for whatever goods and services, whatever couldn’t get donated,” Balkany says.

She pulled off a sit-down dinner for 170 people. Rabbi Simon Benzaquen officiated at the two separate ceremonies,; his wife, Cecilia, walked each bride down the aisle.

The guests came not only from their congregation but also from Bikur Cholim Machzikay Hadath, the Seattle Kollel and Ezra Bessaroth, Seattle’s other Sephardic synagogue.

“People just opened up their hearts and wallets and came out and danced,” Balkany says.

The couples were ecstatic.

“We had no idea that it was going to be as big and as fabulous as it was,” Adina says.

Says her sister: “The love you felt in the room; it was just amazing.”