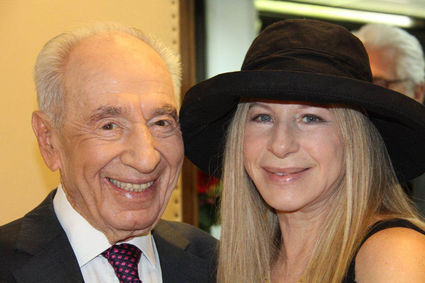 (JTA)—Singer-songwriter-actor-director—now Barbra Streisand can add another hyphen to her description. On June 17, the entertainer was awarded an honorary degree of “Doctor Philosophiae Honoris Causa” in front of a packed auditorium at Hebrew University’s Mount Scopus campus.

The honor came 29 years after her last visit to the Jewish state, when she came to the university to attend the opening of the Emanual Streisand Building for Jewish Studies, which she helped fund and which was named in honor of her father.

In a statement, the university said that the degree was “an opportunity to recognize her support, her friendship, her generosity” to the school and to Israel.

Streisand’s speech included references to her acting career, her connection to Judaism and her ties to Israel. “I wish the world could be more like the Hebrew University where women and men, Jews and Arabs, Muslims and Christians all sit together in classrooms and cafeterias,” she said.

It was to be a busy trip for Streisand. On the same day she received her honor, she made a highly publicized visit to the Western Wall, where she offered her opinions on the hot-button topic of women praying at the site—she is in favor of their inclusion without discrimination—as well as other injustices suffered by women in Israel. In an Associated Press report, Streisand is quoted as saying, “It’s distressing to read about women in Israel being forced to sit in the back of the bus or when we hear about ‘Women of the Wall’ having metal chairs thrown at them when they attempt to peacefully and legally pray.”

Other stops on her itinerary included attending President Shimon Peres’ 90th birthday party and two highly anticipated concerts on June 20 and 23 in Jaffa, both of which were sold out.