When Helen Keller confronted the Nazis 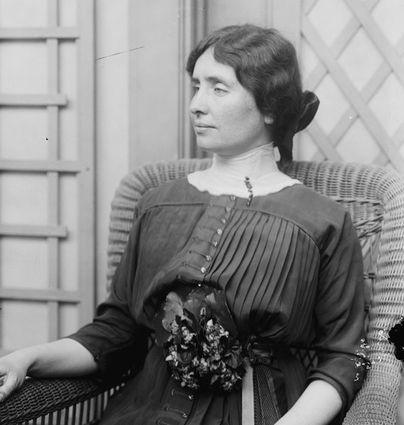 June 27 was Helen Keller Day—the annual occasion when students across America learn about the disabilities activist whose remarkable achievements inspired her generation, and every generation since. Less well known, but no less deserving of commemoration, was Keller’s powerful outcry against the Nazis.

One of Adolf Hitler’s top priorities when he became chancellor of Germany in 1933 was to prevent schools from using books that the Nazis regarded as “degenerate.” Eighty years ago this spring, Germany was transformed into one huge funeral pyre for any books that differed from the Nazis’ perspective on political, social, or cultural matters, as well as all books by Jewish authors.

The Hitler regime chose May 10, 1933 as the date for a nationwide “Action Against the Un-German Spirit,” a series of public burnings of the banned books. The gatherings were organized by pro-Nazi student groups under the supervision of the Minister of Propaganda Joseph Goebbels.

The largest of the 34 book-burning rallies, held in Berlin, was attended by an estimated 40,000 people. Books by German Jews such as Albert Einstein and Sigmund Freud were burned, as well as books by the British science fiction writer H.G. Wells (author of The Time Machine and The War of the Worlds) and many American writers, including Ernest Hemingway (For Whom the Bell Tolls), Jack London (Call of the Wild), and even Helen Keller.

“No to decadence and moral corruption!” Goebbels declared in his remarks at the rally. “Yes to decency and morality and state!... The soul of the German people can again express itself. These flames not only illuminate the final end of an old era; they also light up the new.”

A New York Times editorial sarcastically suggested that the Nazis might next begin “burning microphones” to stamp out free speech. Time called the Nazis’ action “a bibliocaust,” and Newsweek described it as “a holocaust of books.” This was one of the first instances in which the term “holocaust” (an ancient Greek word meaning a burnt offering to a deity) was used in connection with the Nazis.

The outcry around the world included this moving letter from Keller, addressed to “the Student Body of Germany.”

“History has taught you nothing if you think you can kill ideas,” Keller wrote. “Tyrants have tried to do that often before, and the ideas have risen up in their might and destroyed them. You can burn my books and the books of the best minds in Europe, but the ideas in them have seeped through a million channels, and will continue to quicken other minds. I gave all the royalties of my books to the soldiers blinded in the World War with no thought in my heart but love and compassion for the German people.”

“Do not imagine your barbarities to the Jews are unknown here,” she added. “God sleepeth not, and He will visit his Judgment upon you. Better were it for you to have a mill-stone hung round your neck and sink into the sea than to be hated and despised of all men.”

Various foreign leaders also criticized the book burnings, but the Hitler regime ignored such protests. Perhaps if the words of condemnation had been accompanied by diplomatic or economic consequences, the Nazis would have had to reconsider.

Five years later, protests by American college students helped prevent another mass book burning by the Nazis, this time in Austria. Shortly after Hitler annexed Austria in March 1938, the Nazis gave the Austrian National Library a long list of books to be removed and burned.

Students at Williams College in Massachusetts sent a telegram to the Austrian library, offering to buy the books. Riots broke out on the Williams campus when anti-Nazi students tried to burn Hitler in effigy, and pro-Nazi students used fire hoses to stop them.

Yale University’s student newspaper urged the school administration to purchase the Austrian books, which it said would both add to Yale’s “intellectual equipment” and “administer a well-justified backhanded slap” to the Nazis. Unfortunately, Yale’s chief librarian disagreed, claiming the book-burnings in Germany were just “students letting off steam.”

Nevertheless, the protests by students at Williams, Yale, and other universities appear to have had an impact. The Austrian National Library announced that it the books in question would be locked away rather than burned.

Helen Keller is not known to have commented specifically on the student protests. But one may assume she was deeply proud that at a time when too many Americans did not want to be bothered with Europe’s problems, these young men and women understood the message of her 1933 letter—that the principles under attack by the Nazis were something that should matter to all mankind.

Dr. Rafael Medoff is founding director of The David S. Wyman Institute for Holocaust Studies, http://www.WymanInstitute.org. His latest book is “FDR and the Holocaust: A Breach of Faith.”