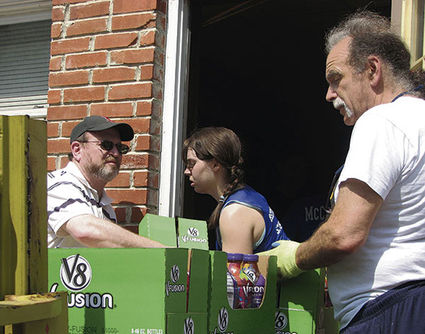 In McRoberts, Ky., unloading a truck filled with groceries sent from Ohio are, from left, Rabbi Steven Bayar, his daughter Merav, and Good People Fund board member Peter Freimark of Cleveland.

McROBERTS, Ky.—The morning mist hovers over the narrow valley in the lush Appalachian Mountains of Kentucky. A creek rushing by the side of the main road passes through the town of Neon in once prosperous Letcher County, deep in the state’s coal mining region.

The empty storefronts reflect the industry’s losing battle with mechanization, depleted coal deposits and cheaper-to-mine western coal. Up the road a piece, people sit in rocking chairs on the porches of mostly rundown homes watching the days go by. There are few jobs here for high school graduates—perhaps a handful at a nearby Wal-Mart or other big box stores, or maybe a job at one of the few restaurants in town.

Teachers, with their government paychecks, form the area’s elite. In Letcher County, 26 percent of residents live below the poverty line; in smaller towns like McRoberts, up to 48.5 percent of children live in poverty and 91 percent qualify for free or reduced lunch.

On June 2, four vans filled with 16 volunteers, a combination of retirees and college or graduate students in their 20s, plus one journalist and one education specialist, pulled into the parking lot of a motel in Whitesburg, Letcher’s county seat. About 10 hours earlier, they had left their homes in Essex County, N.J., in the early morning.

Members of Congregation B’nai Israel of Milburn, N.J., and supporters of the Millburn-based Good People Fund, the volunteers had come for the fourth year in a row to assist local residents, sprucing up the trailer of a divorced woman raising three grandchildren, decluttering the rundown home of an older woman living alone, and sharing expertise with educators and families of children with autism.

It’s an unusual pairing of wealthy New Jersey suburb and struggling Appalachian town, a synagogue’s response not to a sudden natural disaster but to festering economic dysfunction, and a rare demonstration of how people from very different worlds can try—even if they do not always succeed—to create a long-term relationship.

Rabbi Steven Bayar got the whole project started when he decided he wanted to get his congregants out of their comfort zones, away from their homes, to another part of the United States.

“Every congregation raises money and is invested in tzedakah programs in their communities,” he said. “We all support organizations in Israel and some support other causes and organizations by sending money. But when we focus on what is nearby or easy we lose an important lesson—that there are those in need all over and that creating ongoing personal relationships are as important to us as to them.”

Naomi Eisenberger, a past president of B’nai Israel, coordinates the whole effort as executive director of the Good People Fund, a nearly $1 million tzedakah collective she has run out of her Millburn home since 2008.

After a few false starts in other communities, B’nai Israel, with the help of GPF, settled on McRoberts. If the town is foreign to his congregants, it is not exactly out of Bayar’s own comfort zone. Although he spent his early years in Monsey, N.Y., Bayar’s family moved to Charlottesville, Va., when he was in high school. Although it is a college town, Charlottesville contains pockets of rural poverty. “There were kids who didn’t come to school in the winter when it snowed because they didn’t have shoes,” he recalled.

“It’s easy to go once and feel good and then forget who was there,” he said. However, a long-term commitment “creates responsibility and relationship. We are now beginning to know the people well and, because of that, they are beginning to ask us to help in ways we never envisioned. Who would have thought that they need special educators to meet with parents? We would never have thought of it—and yet, it may be the most lasting impact we have had.”

The initiative is also more complicated than a one-time mitzvah day.

“More than anything else it gives perspective,” he said. “It’s hard to return from Appalachia and worry about my air-conditioning breaking down (which it did). It teaches me the meaning of resilience. The residents we work with are my teachers in life.”

During their two-and-a-half days in Kentucky, the volunteers divided into three groups. The largest would work on Saundra Hall’s home, a doublewide trailer in Seco, near McRoberts, across from what was originally the coal mine’s company store. Hall, divorced and the mother of four grown children, is raising her eldest son’s three daughters, Shayla, 10; Kennedi, 6; and Charleigh Beth, 5. Their father was sucked under by drugs; the landscape is dotted with the remains of trailers that were once crystal meth labs. Hall’s ex had raised that son; she raised the rest of the clan.

Amanda and Johnny Hall, Saundra’s oldest daughter and youngest son (her third son still works in the coal mines), were eager to help the crew as they got busy changing light fixtures, spackling, taping, and painting three rooms. Later, new carpet would be laid in four rooms. In each case, one of the volunteers with expertise took the lead and would serve as foreman.

Another group of the New Jerseyans consisted of education specialist Sara Wasserman of Livingston and two graduate students. Wasserman, who runs her own consulting company for special and typical education and coordinates professional development at Golda Och Academy’s upper school, is an instructor of inclusive early childhood education at Montclair State University. She and the students spent their time at a storefront serving as a community center in Neon, just west of McRoberts, providing training, tips, and materials to educators and families of children and teens with autism. They also taught rescue workers how to identify and manage the challenges autistic children can present in an emergency situation.

On day one, only two people showed up.

“I was disappointed and frustrated, to come all this way for one or two people,” said Wasserman. And those who came were “dubious,” and “almost angry,” she said. They were “uncertain whether to trust us.” 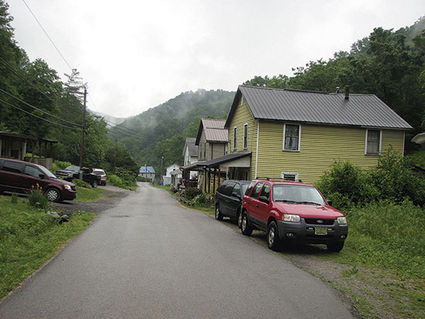 A street in what was originally the African-American section of McRoberts, Ky.; it was closest to the mines, and homes would shake when there were explosions.

But by day three, eight people came, and later, others who wanted to take part but could not attend for various reasons contacted Wasserman.

“Mostly, they needed someone educated in the field to come in and say they were doing the right things,” said Wasserman. “They have to travel six hours just to get a diagnosis, and there is no psychiatrist around. These are parents who are as involved, engaged and active as any parents I’ve ever known. But they are parents without resources who can’t get their kids the help they need.”

Asked if she would return, she said, “I think I have to.”

This article is the first installment in a two-part series. Next: Hard choices, and the value of tzedakah