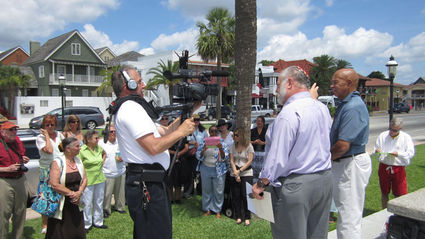 The Southern Christian Leadership Conference, the St, Augustine Accord Freedom Trail and the Civil Rights Museum of St. Augustine all were present in force as the St. Augustine Jewish Historical Society (SAJHS) led a commemoration of the largest mass arrest of rabbis in the United States on June 18, 1964.

SAJHS came only to help create a place of sacred memory on the site where 16 rabbis, 49 years ago stood up for the ethics and behavior mandated by Jewish tradition. The Jewish community of St. Augustine left richer because of the partnerships created with the local African-American community and those who seek to keep the flame of the memory of the civil rights movement alive along Florida’s First Coast.

The Southern Christian Leadership Conference was represented at the noontime ceremony across Avenida Menendez from the Bayfront Hilton Garden Inn—the Monson Hotel in 1964—by a group seeking aid in creating a more solid presence in the First Coast. They reminded participants of the efforts of Stanley David Levison, the Rev. Martin Luther King Jr’s attorney at the time of the formation of the SCLC in January, 1957.

The St. Augustine Accord Freedom Trail’s mission is to remember, recognize, and honor all of those who risked their lives to attain civil rights for all and to celebrate St. Augustine’s pivotal role in the passage of the Landmark Civil Rights Act of 1964 including the arrest of rabbis attempting to integrate the lunch counter and swimming pool at the Monson Hotel. Accord has already created a Freedom Trail with over 30 marked sites around St. Augustine explaining the history of the St. Augustine Civil Rights Museum and is recruiting representatives of the Jewish community to attend its 7th Annual ACCORD Freedom Trail Luncheon where Civil Rights heroes Congressman John Lewis and Dr. Kathryn Fentress will speak. The Civil Rights Museum of St. Augustine hopes to include the episode of the rabbis’ arrest in its Resource Gallery designed to promote civil and human rights worldwide through education, to be housed at 79 Bridge St. in the historic district of the historic city.

The ACCORD Freedom Trail presented by the Northrop Grumman Corporation consists of 31 historic markers, marking the spots where significant civil rights history took place. One can sample the audio portion of the trail by putting the following link into one's browser: http://accordfreedomtrail.org/ACCORD_Freedom_Trail_OnCell_Flyer_%282%29%5B1%5D.JPG For more information on ACCORD, Inc., a 501 c 3 non-profit organization, please visit our website at: www.accordfreedomtrail.org