By Suzan Hagstrom
Special to the Heritage 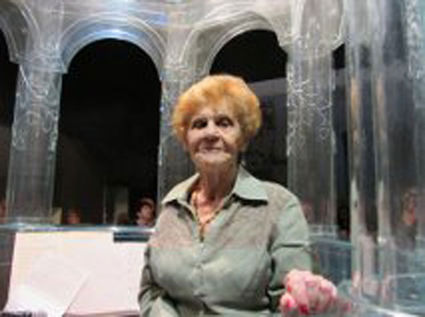 When Jewish Holocaust survivor Helen Garfinkel Greenspun first returned to her hometown of Chmielnik, Poland, in 1992, the synagogue was riddled with swastikas and other graffiti. The gray and crumbling building had been boarded up since World War II, so she could not enter. The townspeople were guarded and unfriendly, and a few individuals even chastised her driver for bringing Greenspun to Chmielnik.

The reception was the opposite in 2008 and 2009 when Greenspun visited again. Chmielnik’s mayor kissed her hand and escorted her into the synagogue—though still a shell of its former self—for cultural performances highlighting the town’s Jewish past. There was talk of restoring the long abandoned and neglected structure that dates to 1638.

Greenspun vowed to return if she were alive and in good health. “If they restore the synagogue, I’ll go back, but it will be my last trip,” she declared.

Last month the synagogue—replastered, newly painted and renovated to its former magnificence—debuted as a museum of Jewish history. Greenspun, now 86, attended as a special guest. During the opening ceremonies she was asked to stand inside a replica of the original wooden bima, a new glass bima designed to emit light and symbolize life. Overcome with emotion, she looked up at the balcony where her mother had sat for Sabbath services.

Greenspun was nearly speechless, which is uncharacteristic of her. In April the Holocaust Memorial Resource and Education Center of Central Florida paid tribute to her tireless volunteerism and 32 years of public speaking about her World War II experience. “Words cannot describe,” she said many times during this most recent visit—her fourth—to Poland.

Besides visiting Chmielnik, Greenspun returned for the first time to Czestochowa where she, her brother and three sisters were exploited as slave labor in Hasag ammunition factories. Officials of Polontex S.A, a textile manufacturer now operating at the site of brutal Nazi work camps, warmly welcomed Greenspun, gently asked questions and attentively listened to her stories.

“I have such a feeling,” she said noting that people’s empathy surprised her more than the preservation of Jewish landmarks. “Even in the last five years I notice a change. It must be the younger generations. The difference is education.”

Artur Gacek, the president of Polontex, said Greenspun is the first Jewish Holocaust survivor that he knows of who has returned to the property. Newspaper and television reporters were there to record the meeting and interview Greenspun, resulting in more personal stories about World War II. Gacek’s maternal grandfather was imprisoned and killed in Auschwitz in 1940 on allegations that he had helped German spies.

Krzysztof Straus, a lawyer, guided Greenspun across town to show her the site of another Hasag factory where thousands of Jews were literally worked to death. Inspired by survivors he had met there and by his family’s Jewish neighbors, Straus made a commemorative stone plaque. He showed Greenspun underground bunkers that had been used as jails and a field where roll call took place.

Straus encouraged Greenspun to visit Czestochowa’s new Holocaust memorial in a vacant field near the Warta River and the town’s new shopping center. The memorial comprises a remnant of the ghetto’s brick wall adorned with a Star of David made of railroad tracks. A copy of the transport list that sent an estimated 40,000 Czestochowa Jews to their deaths in Treblinka in 1942 is displayed inside a transparent marker.

Nearly all of Chmielnik’s 10,000 Jews, including Greenspun’s parents and younger siblings, were also gassed in Treblinka. The town’s current population of 4,000 does not include a single Jew. But since 2003, Chmielnik has conducted an annual Jewish festival, which this year coincided with the synagogue’s reopening.

Each time Greenspun returns to Poland, her friends ask whether she is afraid. Something inside her, Greenspun said, pulls her back to her hometown. “I’m not so close to Chmielnik, but the memories that I have are close to Chmielnik. The love for my parents makes me go.”

Greenspun, who has verbally sparred with neo-Nazis and skinheads in public schools, is not easily intimidated. However, a mysterious stranger who introduced himself as a relative of her elementary school teacher, Zosia Zwolska, gave her pause. On the spur of the moment, in between two of Chmielnik’s scheduled ceremonies, the friendly man gave Greenspun a tour of Chmielnik. Along the way he stopped to make a photocopy of a 1936 photograph showing a 10-year-old Greenspun with her schoolmates and Mrs. Zwolska. While delighted to receive such a personal souvenir and see old parts of town that hadn’t changed, Greenspun felt the grip of fear. “I was thinking, ‘What if he didn’t bring me back?’ I was afraid.”

Besides those moments of anxiety and uncertainty, Greenspun alternately felt sorrow, recalling her parents and peaceful family life before the war, and happiness at meeting others with ties to Chmielnik and witnessing the town’s transformation. “I am crying, but I am happy. I am happy, but I am crying,” she said numerous times during the journey.

“Take a look at my little town. There is more progress here than in bigger cities,” Garfinkel said expressing civic pride. She was as much surprised by a brand new hotel at the edge of town as she was by the synagogue’s conversion to a museum. “A hotel in my little town? I cannot believe.” Funds from the European Union helped finance both projects, said Piotr Krawczyk, Chmielnik’s historian who organizes the town’s annual Jewish festival. Restoring the synagogue cost about $3 million, part of which came from Poland’s Ministry of Culture, Chmielnik and regional governments.

Visitors and journalists often ask Krawczyk whether Chmielnik is using its Jewish festival and synagogue to generate tourism and revive its economy. Preserving history and educating the public will help young people and future generations understand that Chmielnik was originally a Jewish town, he responds, noting that Chmielnik has invested more money than it could ever hope to bring in from the occasional visitor.

Krawczyk plans to spend the next several years building a database to help Jews obtain vital records, such as birth certificates, and trace their family trees. The ambitious project will include more than 100 Jewish towns in a large region.

Benjamin Turocy, 34 and Greenspun’s eldest grandson who accompanied her on the journey, said he appreciates that the town of Chmielnik has chosen to rebuild the synagogue rather than tear it down. “Some might think they only did this for monetary reasons, but I don’t believe it,” Turocy said. “They made us feel at home when they stayed up late with us to eat, drink some wine and vodka and sing some Polish songs—even serenading my grandmother!”

With each visit to Chmielnik, the outgoing Greenspun mostly enjoys connecting with people and learning how they are connected to her hometown. Israel’s deputy ambassador to Poland, Nadav Eshcar, attended the synagogue’s reopening not only to represent his country but also from personal interest. His maternal grandmother was born in Chmielnik but emigrated to Palestine before World War II. When he first visited the synagogue a few years ago, it was in bad condition. Although he is not especially religious and seldom goes to temple, Eshcar said, he felt a strong urge to prepare himself. “My ancestors probably went there for hundreds of years. This was very emotional. What can I say?” 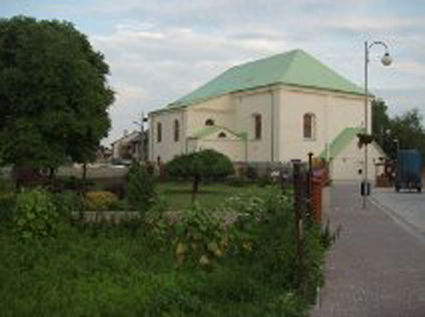 The synagogue Helen Greenspun attended as a child in Chmielnik, Poland, has been renovated. Part of the building dates to 1638.

Eshcar was among many individuals who encouraged Greenspun to return to Poland. “I’m very happy to meet you. We need people like you to speak.” Krawczyk teased Greenspun by saying, “You should come to Chmielnik more often.”

Although Greenspun had previously declared that the synagogue’s reopening would be the last time she would visit Poland, she found it difficult to say she would never return or say “No” to people asking her to visit again. During this most recent journey, each time someone invited her to come to Chmielnik next year, she responded, “If God gives me years.”

Suzan E. Hagstrom is a freelance writer in San Diego, Calif. She is the author of “Sara’s Children; The Destruction of Chmielnik,” a nonfiction book documenting the remarkable survival of five Garfinkel siblings.

No mention of the fact that Poland was brutally occupied and governed by the Germans, causing great suffering to all. To call the perpetrators only Nazis is akin to saying ,the Republicans invaded Iraq. The end of the war was the beginning of another 45 years of occupation and living in fear,deprivation and isolation..to a thoughtful person it might explain a lot. It is only recently that it has become allowable /possible to try and recapture the history of the Jewish communities in Poland.

An uplifting story, but no mention that Germans were the perpetrators, only these mysterious Nazis who were neither a nationality nor a country. Furthermore, the following sentence lacks credibility: Gacek's maternal grandfather was imprisoned and killed in Auschwitz on allegations that he had helped German spies. Auchwtiz was created and operated by Germans, so it is odd that they would kill someone allegedly in their service. Please clarify.