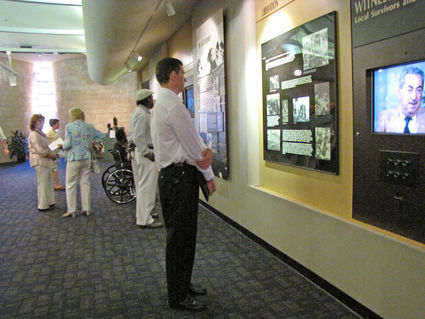 The permanent display at the Holocaust Center has scarcely changed since it was built in the mid-1980s.

The Holocaust Memorial Research and Education Center of Florida in Maitland has recently announced a renovation project that will significantly expand its permanent exhibit. The project will be funded by a grant from the Frances and Joseph Victor Fund at the Community Foundation of Central Florida, one of more than 400 charitable funds established since 1994.

The grant will pay for the purchase of new exhibit cases, and a minor reconfiguration so that the museum can display Holocaust-era family memorabilia recently donated to the Holocaust Center, as well as a new display case for Nazi items in the Holocaust Center’s collection.

According to Pam Kancher, executive director at the Holocaust Center in Maitland, the donation was “perfect timing.” The Holocaust Center, built in the mid-1980s, has not made any substantial changes to its permanent display, although it hosts temporary exhibits throughout the year.

“What was state-of-the-art 30 years ago isn’t as eye-catching as it was,” she says. “More important, over the years we have received a number of amazing items for our archives, things that ought to be displayed for the public so they can have a better sense of the history we are sharing. The Community Foundation has made it possible to improve our exhibit, and we are honored to have such a great partnership with them.”