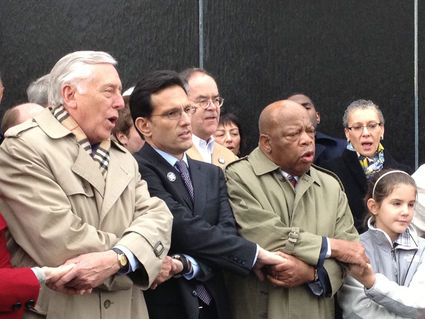 WASHINGTON (JTA)—Reps. Eric Cantor and John Lewis stood together recently at a Montgomery, Ala., memorial to martyrs of the civil rights struggle, joining hands to sing “We Shall Overcome.”

With the Supreme Court decision two weeks ago gutting the 1965 Voting Rights Act—one of the landmark pieces of legislation from that era— Virginia’s Cantor, the Republican majority leader in the U.S. House of Representatives, and Georgia’s Lewis, a Democrat and civil rights hero, now have that to overcome.

The June 25 ruling in Shelby County v. Holder invalidated Section 4 of the law, which designated nine Southern states and a number of other smaller precincts as requiring Justice Department clearance before changing any voting laws. The court found that the section was outdated.

By leaving the act’s basic architecture in place, however, the court left the door open for Congress to update the clearance standards.

“This is an issue that has enjoyed immense bipartisan support, overwhelming bipartisan support from the very beginning of the VRA regime,” said Rabbi David Saperstein, director of the Reform movement’s Religious Action Center. “There’s no reason to expect it would not continue to do so.”

Except that there are reasons—not least of which are differences between national Republicans like Cantor, who believes that outreach to minorities and other Democratic constituencies are key to turning around the party’s fortunes, and local ones eager to seize on the court’s decision.

Republican governors and legislatures in Texas, Mississippi and Alabama already have said they will go forward with voter identification laws that civil rights groups say discriminate against the poor and the elderly.

A similar divide exists in the Jewish community.

National groups—including the Jewish Council for Public Affairs, the Anti-Defamation League, the American Jewish Committee and the National Council of Jewish Women—lined up in decrying the removal of voting protections for minorities and pledging to join efforts to restore them.

In local communities, however, opinion is much less uniform.

“It’s amazing how people who are not in these states can comment,” said Farley Weiss, president of the National Council of Young Israel and a lawyer in Arizona, one of the states subject to Section 4.

“I see the need for protections against discrimination, but not for discrimination that hasn’t occurred in 30 years. To apply an unbalanced rule for something that doesn’t currently exist doesn’t seem right.”

Jews once were central to the struggle for civil rights in the South, an alliance symbolized by Cantor’s appearance with Lewis in Montgomery in March. Outrage over the 1964 murder of two New York Jews attempting to register blacks to vote in Mississippi helped galvanize public opinion and led to the passage of both the Voting Rights Act and its predecessor, the Civil Rights Act.

But the powerful alliance has frayed in the South. Bill Nigut, the Anti-Defamation League’s regional director in Atlanta, said a decision by local black groups to invite Nation of Islam leader Louis Farrakhan to campaign in Birmingham, Ala., on the voting rights issue exacerbated tensions with local Jews.

“Certainly in Alabama there are probably some bridges to repair,” Nigut said. “I think the Jewish- and African-American communities of Alabama—it’ll be interesting to see how they get back on track.”

In Birmingham, the local federation director, Richard Friedman, said his organization would stay out of the Voting Rights Act fight because there was no consensus on the matter.

“Some members of our community are concerned over what they see as a weakening of the Voting Rights Act that could lead to renewed voting difficulties for blacks and other minorities,” Friedman said. “Others in our community, while sensitive to these minority voting concerns, are comfortable with the court’s opinion and ruling in favor of Alabama’s Shelby County.”

Rep. Steve Cohen (D-Tenn.), a Jewish lawmaker from a majority black district around Memphis, said the Jewish and black communities faced a common enemy on this issue and urged Jewish voters to lobby their representatives.

“The people trying to repress the black vote are the same people who don’t welcome Jews into mainstream society,” Cohen told JTA. “The same mamzers that were there in 1963 are there today.”

Cantor, the only Republican Jewish member of Congress, will likely find himself navigating this divide in the months ahead.

In the wake of the ruling, Cantor said he was hopeful that Congress would find a responsible path forward to protect voting rights. But given the realities on the ground—not to mention a polarized Congress and a reluctance among lawmakers to finger their own districts as needing special oversight—it’s easy to doubt that congressional action is imminent.

Saperstein, who works in the building where the original Voting Rights Act was drafted in the 1960s, remains optimistic. He described his own stunned reaction seeing Cantor and Lewis, hands held, belting out the civil rights anthem at the Montgomery event.

Whispering to a companion, he likened the scene to seeing snow in Alabama.

Then, he noticed, it began to snow.