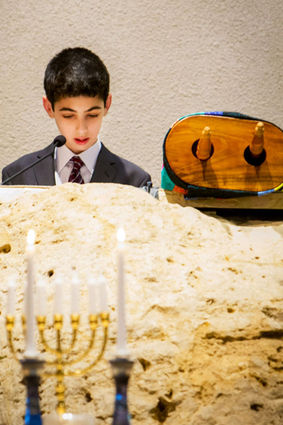 Levi Davishoff on the bimah of Kol Hadash Humanistic Congregation in Lincolnshire, Ill.

(JTA)—As his mother read to him, Levi Davishoff puckered and moved his lips in the universal sign indicating that something is sour. He then pointed to the lemon pictured in the library book.

His mother, Marla, was thrilled. It was the first time that Levi, then 18 months old, had communicated with the baby sign language he had been learning. He had been in therapy for developmental and cognitive delays since was 2 months old.

Davishoff rushed out to buy the book, “Joseph Had a Little Overcoat,” by Simms Taback. It would become Levi’s favorite.

Little did she imagine that 12 years later the book would play an integral part in Levi’s bar mitzvah ceremony.

In fact, for many years it wasn’t clear that any bar mitzvah service would take place.

“His learning disabilities were exacerbated by an illness,” Davishoff said. “He had a significant cognitive decline that he still hasn’t recovered from.”

Due to the illness, Levi, who attends a therapeutic day school, skipped a year of Sunday school at Kol Hadash Humanistic Congregation in Lincolnshire, Ill. But he missed being there and remained eager to have a bar mitzvah ceremony.

“I just wanted to be like everyone else,” he recalled.

Youngsters at Levi’s synagogue aren’t obligated to read the Torah portion at their bar or bat mitzvah. So Levi decided to do a project on Taback, who had become his favorite author.

He researched the graphic artist who wrote children’s books and had been a designer for The New York Times and CBS Records. Levi also contacted Taback’s daughter, who sent an autographed copy of the “Joseph”—it was placed in the Holy Ark next to the Torah for Levi’s service.

Levi’s mother, meanwhile, designed a service booklet for the May 31 bar mitzvah celebration evoking Taback’s use of collages by using images from “Joseph” and his other works.

After the booklets were printed, she added die cuts to each—a signature of Taback’s books. For example, at the top of the page with “Hatikvah,” she punched out a Star of David, which peeked through to an image on the next page taken from the cover of Taback’s book “Kibitzers and Fools.” That image appeared near the portion of Levi’s speech that mentions the book.

On another page, a punch-out of a wine glass was placed next to the Kiddush in the service, revealing on the following page a picture of the sun and flower from “Joseph.”

“As I learned about Simms Taback, I discovered how important books are in my life,” Levi said in his speech. “I am lucky to collect a small library for myself and I try to find new homes for my books when I am done reading them.”

That is, he said, “if my dog Cocoa hasn’t destroyed them first.”

“Articulating the speech was the hardest part,” Levi told The Lifecyclist, his shyness about talking to a reporter coming through. “I just was proud of myself because I did a good thing.”

Said Kol Hadash’s Rabbi Adam Chalom: “The big smile on his face, his obvious sense of accomplishment and pride, were priceless.”