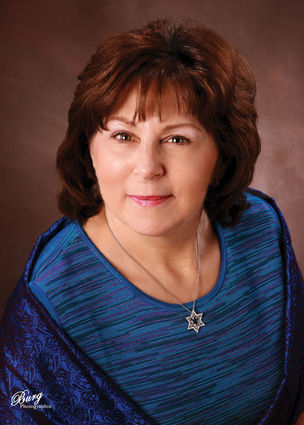 There are some people who just can’t say no to a challenge.

Nina Oppenheim, the Heritage Human Service Award winner for 2013, is one of them.

The Heritage Human Service Award, says Jeff Gaeser, editor and publisher of the Heritage Florida Jewish News, is awarded to those in Central Florida’s Jewish community who perform acts of tikun olam—making the world a better place—selflessly and without thought of reward or recognition. Gaeser will present her with the award at 7 p.m. Aug. 21 at the Jewish Federation of Greater Orlando’s annual meeting at the Roth JCC in Maitland.

“Someone once said to me: If I didn’t do it, it’s not going to get done,” Oppenheim says.

Take, for instance, the expansion of the Federation complex in Maitland.

While she was president of the Hebrew Day School, Oppenheim spearheaded a development campaign and secured the initial land contract, which became the first step of the project.

One person who nominated her for the award said, “Without this critical first step, the expansion would have never gotten off the ground.”

Oppenheim’s love of challenges has led her to serve on numerous boards.

Each organization presented a challenge. For instance, Congregation Ohev Shalom in Maitland needed some help fundraising. As a member of Sisterhood, she managed several fundraising efforts such as sales of ads, directories and Passover wine.

“I have worked to help keep the synagogue on a sound financial footing by planning successful fundraising projects,” says Oppenheim, a temple trustee from 2010-2011. “My present goal is to broaden the involvement of more Ohev members in planning and executing our programs.”

The work has been appreciated by Ohev officials.

Sara Stern, president of Congregation Ohev Shalom, says, “I have known Nina since 1987. I don’t know how she accomplishes all that she does—she must not sleep.”

She probably didn’t get much sleep when she was considering the challenge presented to her by Hillel in 2000.

“I was asked to be the first president of the Hillel board by Dr. Edward Zissman and Marc Katzen,” says Oppenheim. “I think they knew that I was experienced from my term as president of the board of the Hebrew Day School (now the Jewish Academy of Orlando).  I accepted the position because I welcomed the new challenge.”

That challenge was to program for more than 4,000 Jewish college students with one part-time director.

During her second term, she concentrated on raising funds for increased staff and programming for almost 6,000 Jewish students. She is still on the Hillel board as immediate past president.

Her work with Hillel now is getting more students involved.

“She almost never takes no for an answer either for herself or anyone else,” says Susie Bierman, who is on the Hillel board with Oppenheim. “Woe be to anyone who does not understand or appreciate her devotion to Jewish causes. She is tenacious in getting things done, and she does. As one who has been encouraged by Nina more than once to join her—and has—I think our community has been well served by her dedication.”

Dedication would be the word that would describe Oppenheim’s effort at securing the land contract that allowed for the expansion of the Hebrew Day School as well as the entire Jewish Federation complex.

“Along with being Federation board secretary, I was also on the committee chaired by Howard Lefkowitz for the expansion of the entire campus,” says Oppenheim. “We had many hurdles to leap including determining use of the land, projected costs and time for building.”

In 1998, while she was serving as president of the Hebrew Day School, the school was growing and saw the need to expand toward Sandspur Road.

However, there was one problem: “The property that was needed, was at the time, owned by two physicians who had plans to build their new medical office on that property, says Oppenheim.  “In order to make the purchase happen, I had to personally appeal to each physician individually and make the case that allowing the school to purchase the property would serve the greater good of the Jewish community.”

The land purchase did come to fruition leading to doubling the size of the school facility.  The property subsequently was deeded over to the Jewish Federation allowing the complete build-out of the Maitland campus.

“My parents were my best friends. My father used to say to me: ‘Whatever you want, whatever you dream—it is all possible.’ When I get in a tough spot, I think of those words.”

Her role as president of the Hebrew Day School was pushed by Dr. Allan Klaiman. “Nina was very hesitant to take on the presidency of the Hebrew day school,” says Klaiman. “But she was an obvious choice with endless enthusiasm and dedication toward Jewish education.”

Orlando philanthropist Harriett Lake is a friend and big fan of Oppenheim. “Nina has always been a leader, and wherever she leads I will follow, because she puts me on the right track and keeps me aware of the right things to do.”

Oppenheim’s generosity is legendary. “She served the entire Jewish community through the communitywide daily minyan in the mornings at the HDS chapel,” says one who nominated her for the award.

Dr. Ed Zissman, who “first knew Nina Oppenheim as a parent of three beautiful children in my pediatric practice,” also mentioned her daily minyan work. “She continues to serve as the host of the Central Florida daily minyan—providing breakfast following minyan as well as serving as one of the 10 “minyanaires.”

Oppenheim does not restrict her challenged-filled days to the Jewish community alone. She is on the board of the Edgewater High School crew team. “Planned events and yearbooks provided the team with funds to continue their excellence on the water,” Oppenheim says of the challenge of keeping the crew team afloat.

She also brightens the lives of long-term care adults with an Orlando Museum of Art program, “Arts the Spark,” in which the museum distributes to the facilitators a copy of a number of pieces of art, with accompanying notes on the painting, the artist and the method.

Oppenheim says, “It is a wonderful way to bring beautiful art and learning to these residents across Central Florida.”

Last year’s winner of the Heritage Human Service Award was Zena Sulkes, who says of this year’s winner, “Nina is compassionate, sensitive and caring, as well as a good friend. I was so delighted when I was the recipient of the Heritage Human Service Award last year, but I think the choice of Nina as the 2013 recipient has made my award even more valuable knowing that I am in the company of other people like Nina.”

Oppenheim has been a Central Florida resident since 1983. She and her husband Ron live in Maitland and have three children, Sheryl, 30; Craig, 28; and Jared, 23.

Born in Brooklyn, N.Y., she has a bachelor’s of science in chemistry and biology and a master’s of education from the University of Cincinnati.

She was raised in a Conservative Jewish home, but belonged to Young Israel.

“When I was a child, I was raised in a setting where the Jewish woman made her Jewish contribution in the home,” says Oppenheim.  “Now, I am proud to serve my Jewish community in a leadership role. I really do look at the world through a Jewish lens.  I always try to give my all.”

Wow, Nina -- I always knew you were amazing (with the tutoring you did at the Hebrew Day School / Jewish Academy) but I had no idea of all your additional work! Mazel Tov on this wonderful recognition for all you do.