After career in Congress, Deutsch finds new life in Israel 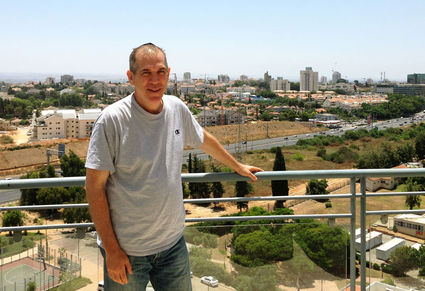 Eight years after leaving office, former U.S. congressman Peter Deutsch spends most of his time at his home in Raanana, Israel.

RAANANA, Israel (JTA)—When U.S. Rep. Peter Deutsch lost his campaign for the U.S. Senate in 2004, forcing him out of Congress for the first time in 12 years, he didn’t quite know what to do with himself.

So he did something not entirely uncommon among American Jews who haven’t quite figured out their next step: He went to Israel.

More than eight years later, Deutsch is still here, living with his family in Raanana, a Tel Aviv suburb. His 22-year-old son recently completed a stint as a combat soldier in the Israeli army, and his 21-year-old daughter is studying at an Orthodox women’s seminary.

Deutsch’s move is more than just atypical; it’s unprecedented. He is the only member of Congress ever to have moved to Israel, and he may be the only living ex-congressman who is an expatriate.

He’s also unusual in one other respect: Deutsch is an Orthodox Jew, which helps explain his unorthodox choices.

“I’m heavily invested in being in Israel in a real way,” Deutsch told JTA during a recent interview at his home in a luxury high-rise with sweeping views of the Mediterranean coastline and the Judean hills. “My son was in a combat unit in the Israeli army. I have skin in the game in terms of Israeli society.”

Puttering around his apartment in jeans, gray T-shirt and black suede yarmulke, Deutsch, 56, hasn’t quite left America behind. He has declined to take Israeli citizenship and doesn’t speak Hebrew. He frequently travels back to Florida, where he spent 22 years in public service—first as a state legislator, then as a Democrat in Congress.

Though no longer a politician, Deutsch still practices a form of public service as legal counsel to Ben Gamla, an 1,800-student Hebrew-language charter school network in South Florida that he founded. The work, for which he is not paid and which takes up nearly all his professional time, has him working American hours in Israel. His income comes from investments, Deutsch says. He also sits on the board of the Illinois-based Great Lakes Dredge & Dock Corp., a publicly traded firm.

“I still clearly live in two worlds,” Deutsch says. “I feel very much at home in both places.”

Deutsch’s move to Israel began as a sabbatical after having spent five successive Augusts in Israel while in Congress. The first year stretched into a second, and then another. Soon Deutsch’s kids were starting high school in Israel. Before long he had bought two apartments in Raanana.

What propelled him to Israel, Deutsch says, was the opportunity to be part of the historic return of the Jewish people to the Holy Land. Deutsch notes that Israel recently surpassed the United States as the largest Jewish community in the world, the first time Israel has held that distinction in two millennia.

“When something happens for the first time in 2,000 years, I think you ought to at least think about it a little bit,” Deutsch said.

Deutsch sees a bright future for Judaism in Israel but a dark one for American Jewry, something he bases in part on his own experience growing up as a secular Jew in the Bronx.

Schooled at the elite Horace Mann School in the New York borough, Swarthmore College and Yale Law School, Deutsch moved to South Florida in 1982 because he wanted to get involved in politics and believed he could do best in a place with a rapidly growing population. It didn’t hurt that his parents owned a condo in Broward County, where Deutsch could live rent free. Almost immediately, Deutsch was elected to the Florida House of Representatives. He was just 25.

His Jewish awakening came later, and by the time he was elected to Congress at age 35, he was fully Orthodox. Though he belonged to a synagogue and sent his children to Jewish day school, Deutsch kept his observance quiet, in stark contrast to the other Orthodox member of Congress at the time, Sen. Joe Lieberman.

Deutsch believes that most American Jews today view their Jewish background much as he did when he was younger, and with the same dispassion as Americans of Greek or Polish or Italian extraction might view their ancestral origins: as little more than a footnote to their identity.

“Do they feel bad about marrying a gentile? It’s irrelevant,” Deutsch said. “They’re not in their minds going away from Judaism, rejecting their parents, struggling to become part of the mainstream society—they’re not thinking about that. It’s a non-event. In a sense, that is the American Jewish story today.”

The Ben Gamla charter schools are Deutsch’s effort to change that. He wants to give Jewish kids who otherwise would attend public school an opportunity to be in a Jewish environment and develop a Jewish identity—at taxpayer expense.

As public schools, the Ben Gamlas cannot teach religion, but the schools have a Jewish flavor. The Hebrew curriculum includes Israel education and Jewish history, and most of the schools are on Jewish community campuses. Some 85 percent of the students are Jewish. Supplementary after-school religious programs take place onsite or nearby.

Deutsch is unabashed about using public money to support what he describes as Jewish identity building. Out of Ben Gamla’s collective budget of $10 million a year, Deutsch says 80 percent serves Jewish communal purposes.

“To me, it is literally the best leverage that I’m aware of in Jewish communal stuff in the history of the Jewish people,” Deutsch says. “Jews need to be supportive of this endeavor.”

Though he has been in Israel for nearly a decade, Deutsch says he has no interest in becoming involved in the country’s politics. Nor does he miss U.S. politics or regret foregoing easy reelection to the House of Representatives so he could run for Senate. (Rep. Debbie Wasserman Schultz now represents Deutsch’s district.)