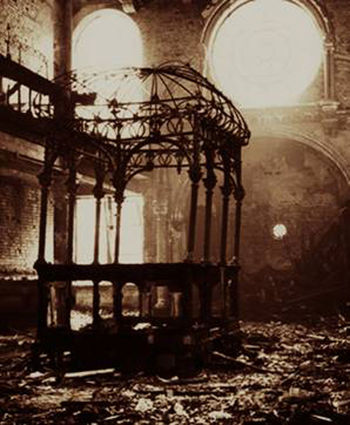 The synagogue at Nuremberg was one of hundreds destroyed the night of Nov. 9-10, 1938.

Each year the Holocaust Memorial Research and Education Center of Florida sponsors a community program in remembrance of Kristallnacht, also known as the November Pogrom, a series of attacks against Jewish communities throughout Germany and parts of Austria. On Nov. 9–10, 1938, thousands of Jewish homes and shops were ransacked and destroyed with sledgehammers, pickaxes and rocks. The streets were left covered in pieces of smashed windows—the origin of the name Kristallnacht, the “Night of Broken Glass.” Ninety-one Jews were killed, and thousands of Jewish men were taken to concentration camps. During that assault, 1,668 synagogues were ransacked and vandalized, and 267 set on fire.

The year 2013 marks the 75th anniversary of Kristallnacht. Because of the significance of this anniversary, the Holocaust Center in Maitland has formed partnerships with the Interfaith Council of Central Florida, the Bach Festival Society and the Negro Spiritual Scholarship Foundation to present a series of community events and educational opportunities. Other organizations and individual sponsors are being added to the collaboration, and more partners and sponsors are still being sought.

The Bach Festival Society will present Sir Michael Tippett’s oratorio “A Child of Our Time,” a work that was created in response to Kristallnacht to reflect the composer’s compassion for the oppressed everywhere.

Throughout the weeks leading up to the performance, which will be held at Knowles Memorial Chapel at Rollins College on Nov. 9 and 10, there will be a number of events including survivor stories, lectures and films. A complete schedule is available at http://tinyurl.com/kristallnacht2013.

Additionally, the Interfaith Council of Central Florida and the Holocaust Center are teaming up in an effort to have the Center’s 2012’s Kristallnacht Remembrance program—Witness—presented in 75 houses of worship, schools, civic organizations and other venues. Witness is a readers’ theater that uses the actual words of victims, perpetrators and onlookers to describe the tragic events of that night. The readers’ words accompany a PowerPoint presentation of pictures and news headlines from that era. The Holocaust Center is making copies of the scripts and the PowerPoint available at no charge to organizations who want to present a performance for their own group.

According to the Holocaust Center’s executive director, Pam Kancher, “Kristallnacht marks the moment that should have erased any doubt about Hitler’s intentions. Jewish lives were in jeopardy, and clearly there would be further tragedy, yet the world stood by in silence.  The Holocaust Center was founded with the mission of remembering the past to protect the future. Kristallnacht is the day of all the days in history that must be remembered most clearly. This is the day when the greatest crime against humanity was so clear, so compelling, that no one could escape its significance. And this is the day, more than any other day, we must think about when we say Never Again as a promise to all people in all times.”

There are several opportunities to sponsor the community events for this project. If you’d like to support this effort, contact the Holocaust Center at 407-628-0555.