More than a quarter of U.S. House urges engagement on Iran 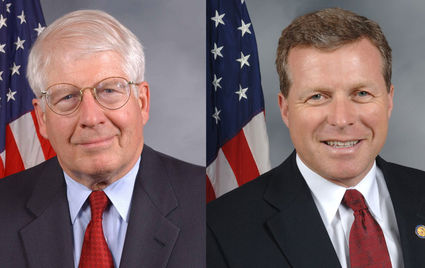 WASHINGTON (JTA)—Days after Israeli Prime Minister Benjamin Netanyahu dismissed the incoming Iranian president’s plea for engagement with the United States and called for ratcheting up military pressure, a bipartisan letter circulating in the U.S. House of Representatives is urging President Obama to test Hassan Rohani’s offer.

The letter, spearheaded by Reps. Charlie Dent (R-Pa.) and David Price (D-N.C.), had garnered 118 signatures by the afternoon of July 18, more than a quarter of the House. The bulk of the signatories are Democrats, but 15 Republicans have signed on as well.

While the letter does not mention Netanyahu, it sharply diverges from the Israeli leader’s recent calls to increase pressure on Iran and his dismissal of the Iranian president-elect as untrustworthy.

“It would be a mistake not to test whether Dr. Rohani’s election represents a real opportunity for progress toward a verifiable, enforceable agreement on Iran’s nuclear program that ensures the country does not acquire a nuclear weapon,” says the letter, which was due to be sent to the president last Friday.

“We must also be careful not to preempt this potential opportunity by engaging in actions that delegitimize the newly elected president and weaken his standing relative to hardliners within the regime who oppose his professed ‘policy of reconciliation and peace,’ “ it says.

In the wake of Rohani’s victory last month, Obama told PBS that the election appears to create an opening for more “serious, substantive” engagement with Iran. Congress has frequently been a bastion of resistance to such engagement, but the letter, the number of signatures it has attracted and the seniority of some of the signatories suggest that such resistance is not foolproof.

“I think the way to classify the letter is that there is a diversity of opinion on the path forward in the House,” Andrew High, a spokesman for Price, told JTA.

The letter comes just days after Netanyahu said on “Face the Nation” that the Obama administration should back up its policy of opposing a nuclear Iran with “increasingly forceful sanctions and military action.”

“I think it’s very important to make clear to them that you won’t allow them to have this weapon and to demonstrate that by action,” Netanyahu said July 14 on the CBS news program. “That is, you can also make clear that the nuclear option, which is the military option, is truly on the table. The Iranians take note of that.”

Netanyahu said Rohani did not represent a substantial change from the hardline policies of his predecessor, Mahmoud Ahmadinejad, though he has expressed willingness to make the country’s nuclear program more transparent while continuing to enrich uranium. Netanyahu said the Iranians at their current enrichment levels are “edging up” to a red line that could precipitate Israeli military action.

“They have now about 190 kilos out of the 250 kilos of 20 percent enriched uranium” needed to make a bomb, Netanyahu said. “They’re also building faster centrifuges that will enable them to jump the line, so to speak, at a much faster rate—that is, within a few weeks, once they get to that critical mass of 250 kilos.”

The Dent-Price letter also expresses wariness of Rohani’s offer, even as it presses the case for engagement.

“We are mindful of the limitations of the Iranian presidency within the country’s political system, of the fact that previous Iranian presidents elected on platforms of moderation have failed to deliver on promised reforms, and of the mixed signals that Dr. Rohani himself has sent regarding Iran’s nuclear ambitions,” it says.

The letter comes as a number of lawmakers in Congress have joined Netanyahu in calling on the Obama administration and the international community to ratchet up pressure. Some members in signing the letter appear to have placed themselves at odds with positions they signed on to just weeks ago.

Several of the signatories on the Dent-Price letter are members of the House Foreign Affairs Committee, which collectively signed a letter to Obama on July 1 saying the election had “done nothing to suggest a reversal of Iran’s pursuit of a nuclear weapons capacity.” The committee dismissed any contention that Rohani was a “moderate” and called on Obama to expand and intensify sanctions.

A lobbyist who campaigned for the Dent-Price letter said it was his impression that lawmakers signed on in part because they wanted to investigate all options in the wake of U.S. involvement in two controversial Middle East wars over the last decade or so.

“It resonates with them because even those members who believe in their heart Iran will need something more kinetic than diplomacy, they still prefer diplomacy because it’s been a rough 10 to 12 years for them as members of Congress during U.S. military engagement in the Middle East,” said the lobbyist, who spoke on condition of anonymity.

The lobbyist said he and his colleagues were careful to pitch the letter as not obviating sanctions and military action down the line.

“All these members agree that despite what their plan B’s are, the opportunity to negotiate and resolve this diplomatically has to be explored,” he said.

A number of the signatories have senior positions in the House. Dent and Price are senior members of the Appropriations Committee, and Rep. James Clyburn (D-S.C.) is the third-ranked Democrat.

The letter also has the backing of J Street, Americans for Peace Now and the National Iranian Advisory Council. The American Israel Public Affairs Committee did not adopt a position on the letter, an official told JTA.