Laying bare the facts about world of gay Israel 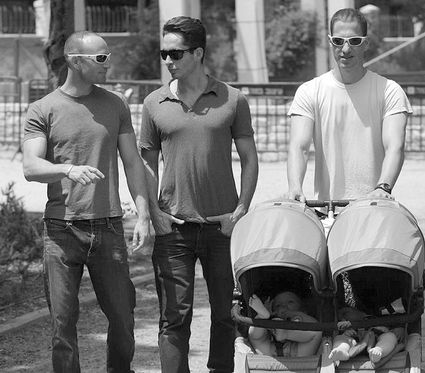 Filmmaker Michael Lucas (center) walks and talks with a same-sex family in his documentry, ‘Israel Undressed: Gay Men in the Promised Land.’

The documentary, despite its suggestive title, is a straightforward affair (no one undresses), as Lucas takes viewers from Tel Aviv nightlife to openly gay members of the Israel Defense Forces to same-sex weddings.

The 41-year-old Lucas, a Moscow native and Israeli citizen who makes his home in New York, says he made the film because people outside Israel have little to no idea how gay-friendly and progressive the atmosphere is there. “The only information people get about Israel is in papers like The New York Times, about the conflict between Israel and its neighbors.”

Lucas says that ever since he became an Israeli citizen in 2009, he has wanted to show a different side of Israeli life. “The majority of movies that get placed in festivals are about this problematic side of Israel, the occupation.” A movie like “Undressing Israel,” which shows the country in a favorable light, “is practically impossible to get into film festivals It’s all about very far-left gay politics—the people on the festival boards don’t want to show Israel in a positive light at all.”

Ironically, Lucas’ co-director of “Undressing Israel” is Yariv Mozer, the director of one of those films showing “the problematic side.” His 2012 documentary, “The Invisible Men,” about the difficulties gay Palestinian men face on both sides of the border, also premiered locally at this year’s QFest.

It is rare to see someone from the world of pornography make the leap to the other side of the MPAA ratings—after Ron Jeremy, Traci Lords and Jenna Jameson, the list thins out considerably—but this is not the first time Lucas has redefined himself.

Lucas says he has long been driven to show his support for Israel. As both a Jew and an openly gay teenager and young adult in Moscow, where both homophobia and anti-Semitism ran rampant, he says, he understood the importance of having a place where he belonged, where he would not be insulted and discriminated against for who he was.

When asked why Israel has become one of the standard-bearing nations for LGBT equality, Lucas doesn’t hesitate with his answer. “When it comes to Israeli society, I think that because the Jews were persecuted for so many years, it resonates with them. It is easy to explain there that discrimination is discrimination, whether it’s by ethnic backgrounds or sexual orientation.”

Elad Strohmeyer has a very similar take on the issue. Strohmeyer, the deputy consul general to the Consulate General of Israel to the Mid-Atlantic Region, which sponsored the Israeli films’ screenings at QFest, believes his country’s polyglot population has made its society an accepting one by necessity.

“I think that the fact that Israel is friendly for the gay community is because we are a country of many different groups,” says Strohmeyer, who is openly gay. “We understand that there are different cultures and we need to coexist with them. Israel is an open society, a democracy where people are free to express their voices. What better way to do that than in artistic media?”

Strohmeyer is quick to add that things are not perfect in Israel, which is why, he says, the country’s LGBT Task Force is working  hard to improve the rights of its LGBT community.

Lucas is aware that he will be taken to task by certain factions for presenting a subjective view of Israel, one that does not give equal time to those issues continuing to face the gay community, and he is fine with that. But he has no patience for people who say his film is “pinkwashing,” a term that is used as a way to accuse Israel of using its gay-friendly culture to “cover up” what critics see as the ongoing oppression of Palestinians. He expresses bemusement about what he calls a bogus concept created from “false ideas.”

“It doesn’t happen often,” he says, “but people have asked me, ‘Why didn’t you show the occupation?’ I answer, if you made a movie about the occupation, would you also talk about gay rights? No, you wouldn’t, because that would be strange.”

Despite the increased scrutiny that comes with being part of the mainstream documentarian community, Lucas plans to continue chronicling gay communities. “I have already made a second documentary, which is about the gay community in Russia,” he says. “I lived in Russia half my life and I wanted to show what an evil country it is. They hate Jews, ethnic minorities, religious minorities, sexual minorities—they even hate each other.” And, he adds confidently, he won’t have to work anywhere near as hard to get this film shown as he had to for “Undressing Israel.”

“Trust me—this one will be accepted by all of the gay film festivals. Everyone agrees that what is going on there is very bad.”