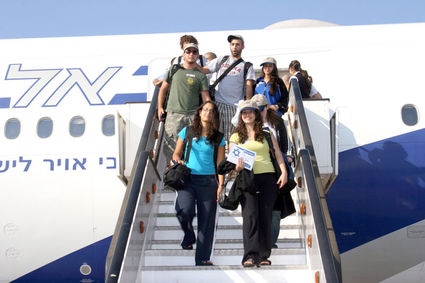 New immigrants to Israel step out of the plane at Ben Gurion Airport.

NEW YORK (JTA)—Eventually, all Jews will end up in Israel, Cliff Katz says. But for now, a labor dispute in the Jewish state is holding things up.

Katz, 47, decided to immigrate from Texas about a year ago. He filled out all the paperwork, paid the fees and already had two job interviews lined up for later this summer.

“Since the [Jewish] Agency heard that the Foreign Ministry shut the doors temporarily, I cannot enter Israel,” Katz said. “I’m ready to go.”

About 1,300 North Americans are scheduled to make aliyah to Israel this summer. The bulk of them have been processed and will arrive as citizens.

For the 300 or so who have not yet been processed, the Jewish Agency for Israel, which coordinates immigration to Israel with the nonprofit Nefesh B’Nefesh, has found a temporary solution: They will arrive with tourist visas and be processed in Israel. But until they are, standard immigrant benefits—among them, access to national health care and a monthly stipend—are on hold.

JAFI has agreed to cover the first month of private health insurance but is asking immigrants to come with their own insurance until their status is finalized.

“Right now we’re facing obstacles that usually we don’t have, and we’re trying to do everything we can to take those obstacles out,” said Rafael Cohen, the director of aliyah in JAFI’s New York office. “It’s true we’re not able to give [the oleh] the same service as usual, but we are there for him.”

For Katz, who is unemployed and on disability, not being able to join Israel’s nationalized health care system has forced him to put off the move. Other olim are in the same position.

“It’s just really frustrating when you’re ready to go and all of a sudden this hits you,” he said.

The dispute is the latest salvo in the six-month dispute between the union and Finance Ministry. The union is seeking increased wages and benefits for its diplomats along with a new collective bargaining agreement to address a wages and benefits structure that sources say has not changed since 1994.

Olim aren’t the only ones affected by the labor strife.

Diplomats continue to work in Israel and in its diplomatic missions around the world, but consular services have been reduced to immediate health emergencies, adoptions and burials. Prime Minister Benjamin Netanyahu’s ability to travel abroad has been complicated. And some 40 to 50 people are turned away from the Los Angeles consulate daily for passport or other services, said Uri Resnick, the deputy consul.

“We’re not interested in hurting anyone,” Resnick said. “The citizens looking for services are unfortunately affected by these labor sanctions. The fact that we have to take these kinds of sanctions reflects on the gravity of the situation.”

Despite the benefit to the country of aliyah, the situation is not considered an emergency. Chaim Shacham, Israel’s consul general to Florida and Puerto Rico, said a recent strike by Israeli doctors and nurses had a greater impact on the country’s ability to function.

But the effect of the Foreign Ministry dispute is magnified because of its impact on national security. Still, Shacham says there is no other way to address the need for a more proportionate allocation of resources for the ministry.

“Most countries, especially enlightened democracies, understand labor disputes and the inherent right of workers to organize,” he said. “I’ve heard nothing but encouragement from fellow foreign service officers from different countries, as well as my counterparts in the host country.”

As of the beginning of last week, teams from the Foreign Ministry union and the Finance Ministry were meeting, but no proposals had been made, according to a source at the Israeli embassy in Washington.

“The dynamic of limited labor action is continuing because that’s the only way to pressure the Ministry of Finance in Israel to negotiate,” said the source, who requested anonymity.

He said diplomats see themselves as part of Israel’s national security, but must address their own rights as employees and take care of their families.

“People understand that it’s not an issue of foreign relations; it’s an issue of working relations in Israel,” the source said.

Nobody has canceled their aliyah plans because of the dispute, but a handful of people have postponed their move, according to Cohen. With no clear end date in sight for the dispute, JAFI is discouraging olim from deferring their trips, the source said.

“I’m concerned about it because you never know what will happen,” he said. “We’re telling them we’ll be there for them.”

For some, such assurances just aren’t enough.

Unable to find work in Texas, Katz is planning to move to New York to seek temporary employment. He hopes to be on the first Nefesh B’Nefesh flight to Israel after the dispute is settled.

Until then, he sympathizes with the Foreign Ministry employees, but he believes both sides need to put politics aside for the sake of aliyah.

“Open the doors and allow us to come in,” Katz said. “We’re Jews, we’re meant to get to Israel. Eventually we’re all going to get there, but some of us would like to leave now.”