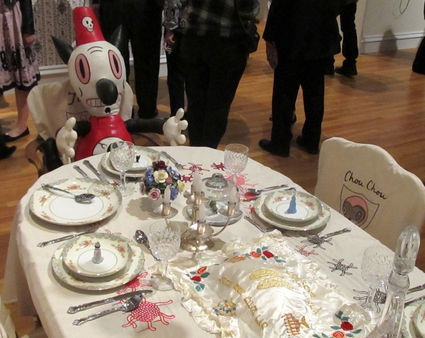 Toby, one of the characters of contemporary artist Gary Baseman, is seated at the Jewish holiday table in Baseman’s show at the Skirball Cultural Center in Los Angeles.

Inviting the museum visitor down hallways and through rooms of rendered memories and memorials, the Gary Baseman show at the Skirball Cultural Center in Los Angeles uses a design based on the artist’s Jewish childhood home to offer up a retrospective of his extended family of characters, related artworks, and family memorabilia.

The show’s title, “The Door is Always Open,” is taken from a remark Baseman’s Yiddish speaking father made while explaining his attitude about hospitality: “Gary, the door is always open.”

Just how open? The night of the show’s opening, Baseman dedicated and helped hang a mezuzah based on the one that hung at his parent’s home—it has the head of one of his characters—as he welcomed a crowded museum full of fans and family to the show.

The retrospective, which runs through Aug. 18, is the first major solo show for the Los Angeles artist at an American Jewish museum. Baseman, who is the creator of the Emmy-winning Disney cartoon series, “Teacher’s Pet,” about a dog who dresses up as a boy, and the artistic designer of “Cranium,” a popular board game, has also given lectures and workshops at the Bezalel Academy of Art and Design in Israel.

Unlike the usual museum environment, Baseman pointed out that people do come in and sit on the furniture.

The artist, whose work skirts a line between fine art and art toys, has also created covers for the New Yorker and illustrations for Time, as well as ad campaigns for Nike and Mercedes-Benz.

His smiling but oddly menacing characters, who you also might suspect commit acts of mayhem and worse while you’re not looking, are available online and in gallery shops in hipster neighborhoods around the country—even Beverly Hills, as Lladro recently released a porcelain version of a design he created for them there.

Baseman is also on a mission “to make being Jewish cool,” and one of his creations, “Gefilte,” a multi-headed green and finny character, is pictured on the aprons that docents wear as they give museum visitors the tour. On the other hand, another of his characters, “Pupik,” is not in the show.

“He’s got an outtie,” Baseman said of Pupik, who is festooned with erect orange appendages. Museum officials passed on including that character in the family-friendly show.

With photos and family videos intermixed with his art, the show invites the visitor to enter and respond to the inner world of a Jewish family.

Seated in the show’s “dining room” at his mother’s table, including china and silverware set for a Jewish holiday meal, is the fez-wearing life-size Toby, Baseman’s all-seeing character, who has a huge eye painted on his middle. In another show of the artist’s work, Toby is described as “Your shadow. Your mirror. Your best friend in the whole wide world.”

Toby is “the keeper of your secrets,” said Baseman.

Posing amidst a setting evocative of the Jewish Fairfax district where Baseman had his bar mitzvah and his mother worked in the famous Canter’s deli, the grinning Toby prepares the visitor for a house tour of glimpsed Baseman memories.

There is a living room, where Baseman remembers drawing as a child—he has added cushions with his characters on them to the chairs. A study is filled with elements of pop culture that inspired him, and a den where his TV show is playing on a vintage set. On display in the backyard is Baseman’s childhood take on a Superman costume, with the Hebrew letter “Shin” replacing the “S.”

On display in the bedroom are darker works, where Baseman’s fantasies merge with older established Jewish folklore. A tale with which Baseman recently became familiar, the golem—the story of a man made of clay who protects the Jews of Prague—bridges the gap between the two mythologies.

The golem, who came alive when the word “Emet” (truth) was written on his forehead, and died when the letter aleph was erased, leaving “Met,” (death), is referenced in Baseman’s work, “Beverly (In memoriam).” 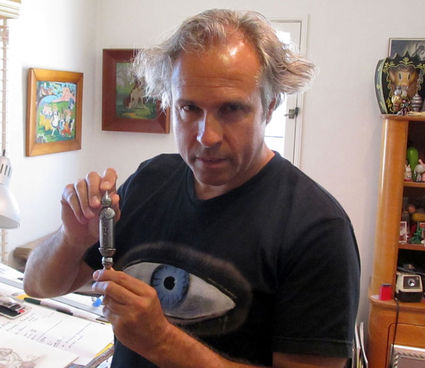 Contemporary artist Gary Baseman with the mezuzah he designed, based on the one from his parents’ home, for his show at the Skirball Cultural Center in Los Angeles.

According to Aaron Rosen, the author of the show’s catalogue, the work that shows a little girl wearing a homemade ghost costume with the word “Met” appearing on her forehead memorializes “the children who perished during the Holocaust.” The other figure in the piece, Beverly, Baseman’s favorite cousin who met an untimely death, has the word “Emet” on the front of her cap.

“Truth is big theme for me,” said Baseman, who wants visitors, especially the younger adults who make up the base of fans to relate to his parents’ experience in the Holocaust. During World War II, his father, who escaped from a camp into the woods, became a partisan and fought against the Nazis.

“My parents protected me from that burden,” said Baseman, who has traveled to Poland and the Ukraine on a Fulbright Fellowship to recapture his parents’ history.

But once his parents were gone, how did the door stay open?

“Once their physical home was no more, the creative door is always open,” Baseman said.