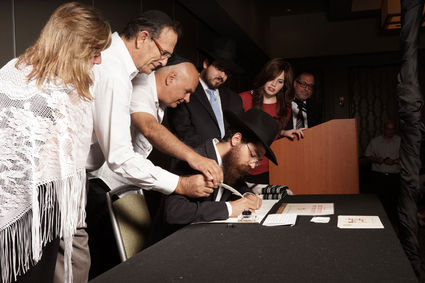 Gov. Rick Scott declared Sunday, July 21, 2013 to be “ Torah Day.” The proclamation honored the North Orlando Chabad community and the inauguration of the congregation’s first torah dedicated by Zvi and Dawn Shamu and Paul Sebag. Scott “extended greetings and best wishes upon” Rabbi Yanky Majesky and wife Chanshy on their commitment “to bringing the joy of Judaism” to residents of Sanford, Longwood, and Lake Mary (since 2010).

A crowd of approximately 200 members of the Jewish community from all backgrounds gathered at the Westin Hotel in Lake Mary to celebrate the historic moment as scribe Chaim Pape began the year-long process of writing the community torah.

Chanshy Majesky addressed the crowd, noting the celebratory theme of the morning’s ceremony, “One people. One community. One Torah.” She noted, “The Rebbe explains that every Jew, every soul is a letter in the holy Torah... In 1981 the Rebbe wanted to unite Jewish children under bar and bat mitzvah. A torah was written so that every single letter was dedicated by another child. Great emphasis was placed that the child should pay one dollar from his own money—so it was truly his or her letter in the Torah.” Chanshy shared that the Rebbe’s messengers from all over the globe gathered “child by child, letter by letter, dollar by dollar for this special project. Jewish children from the U.S., Israel, Europe and all over the world joined together to write a torah scroll.” She stated that Chabad of North Orlando would carry on the tradition of uniting the community under one torah.

Bar mitzvah student Cameron Wagonner served as spokesperson for the children of Chabad of North Orlando. Wagonner expressed his gratitude for the inaugural torah, explaining the impact on the youth of the congregation. He stated, “(Today) I feel important because I’m speaking to the Jewish community on behalf of all the Jewish children in our community. And finally, I feel important because of what you adults are doing for my generation.” He continued, “So dear adults: On behalf of the children in our community, I want to promise to you that we will continue doing our best to keep our Jewish flame alive. Thank you again for starting to write this torah for me and my friends.”

Rabbi Pape, a professionally licensed torah scribe from Crown Heights, N.Y., was visibly moved by the enthusiasm of the congregants of all ages.

He addressed the spirited crowd with an enthusiastic, “What a turnout!”

On a more serious note, he reflected that Central Florida was under “a strong spotlight”, and that it was a pleasure to come together as one community. Pape thanked those instrumental in bringing the torah to Orlando. Then, he explained the process of how a torah comes together. He remarked, “When a son is very little, a father teaches him to say the words of the torah. When he is three years old, he learns to write the black letters (of the torah) onto white paper. At three learning changes from oral to visual.” Pape continued, “After three years, the (North Orlando Chabad) community is now inspired to have a hands-on visual torah of its own.” He concluded, “I stand inspired and uplifted (by the large show of support), as I begin writing the first few lines of the torah.”

Rabbi Majesky thanked the crowd for their support, noting, “Today we start ourown torah—‘One people, One Community, One Torah.’ This is not just a torah, but a new chapter for our community... May the new torah bring lots of blessings into your life, with mazal nachas and many blessings. Three and a half years is a short time to have our own torah. May we continue to grow—from strength to strength.”