In Massachusetts governor's race packed with Jewish candidates, much talk of repairing the world 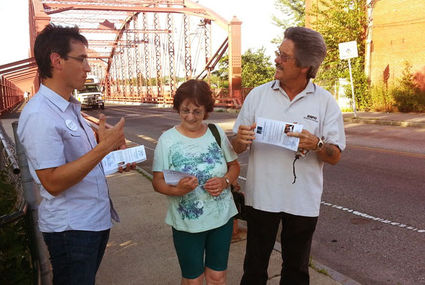 WASHINGTON (JTA)—The election for Massachusetts governor is still 16 months away—too soon to know what the issues are or who the viable candidates will be. But apparently it’s never too soon for tikkun olam.

Four of the declared candidates are Jewish, and all are grounding their campaigns in the religious imperative to repair the world.

Steve Grossman, the state treasurer and a past chairman of the Democratic National Committee, quotes from Isaiah in describing his ambition to close the gap between rich and poor.

“I received my Jewish heritage, my background, in being that person who can be a repairer of the breach between those who are well-to-do and those who lack the things people aspire to,” he said in an interview.

Dan Wolf, a state senator and an aviation entrepreneur, also knows a bit about repair.

“This is about giving back and repairing the world,” he said of his run.

Evan Falchuk, who is running under the banner of a new third party, United Independent, roots his quixotic bid to buck the two-party system in—you guessed it—world repair.

“There’s so much to me about that story which is very common to Jews in America,” Falchuk said, describing his grandfather’s journey from Russia to Venezuela and his father’s from Venezuela to the United States. “What is common is this notion of a stubborn insistence to make the world a better place.”

Wolf and Grossman are Democrats who declared at the state party convention earlier this month along with another Jewish candidate, Don Berwick, a former administrator of the federal Medicare and Medicaid programs who did not respond to requests for an interview.

A fourth Democrat, Joe Avellone, also declared his candidacy. No Republican has declared yet.

Massachusetts has never had a Jewish governor, and the proliferation of Jewish candidates this early in the race is no guarantee it’s about to get one. Heavy hitters such as state Attorney General Martha Coakley, U.S. Rep. Mike Capuano and Juliette Kayyem, a former Homeland Security assistant secretary and Boston Globe columnist, are all considering bids for the Democratic nomination.

“It’s far too early, it can break any number of ways, and the Democratic Party has a history of primary candidates feeding off one another,” said one insider who has worked for the Jewish community and on political campaigns.

On the other hand, Massachusetts residents would hardly raise an eyebrow at the number of Jewish hopefuls in the race, the insider said.

According to American Jewish Year Book statistics cited by the Jewish Virtual Library, the state’s Jewish population is 277,000, or 4 percent—more than twice the national percentage. And Jews also have figured prominently in state policy debates in recent years, including helping to shape health care reform during the governorship of Mitt Romney from 2003 to 2007.

“Barney Frank was in Congress for, what, a hundred years? He was an active Jew,” the insider said. “No one under 35 would even think twice about it.”

Grossman, Falchuk and Wolf all actively tout their Jewish community involvement, but none more so than Grossman, a past president of the American Israel Public Affairs Committee and a major fundraiser for Jewish causes both in his state and nationally.

“Rabin’s exact words were, ‘AIPAC is the most important American Jewish organization and I need your help,’ ” Grossman recalls of his 1993 meeting with the late Israeli leader.

Grossman immediately convened a phone conference with the AIPAC board, and it became the first U.S. Jewish group to endorse the talks.

“That was probably as meaningful a conversation I’ve had with any leader,” Grossman said. “I felt I was participating in a small way in Jewish history.”

Falchuk’s mother is Nancy Falchuk, a former president of Hadassah, and he says they are equally proud of one another.

“When my mother talks about bringing about peace through health care, I find that inspiring,” said Falchuk, 43, an executive at a health care company. (His brother, Brad, is a co-creator of the popular television shows “Glee” and “American Horror Story.”)

Wolf, 55, is a co-founder of Cape Air, an airline based on Cape Cod, where Jews are few in number. But since his first run for state Senate in 2011, he has sought to reconnect himself with the larger Jewish community in Boston.

“It has been interesting raising a family on the Cape,” said Wolf, who moved to the region from his native Philadelphia in the 1980s. “Not only is there not a Jewish community, Wolf is not identified as a Jewish name, so people are surprised when they find out I’m Jewish.”

Falchuk’s emphasis has been on reintroducing political diversity in a state where Democrats dominate the Legislature. His literature has been light on specifics, but he emphasizes fiscal responsibility while staking out traditional liberal positions on social issues such as abortion rights. 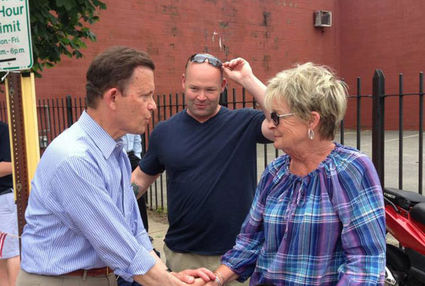 He noted that a majority of state residents—53 percent—are independents. That and low turnout in elections suggest that voters are frustrated with the “traditional parties,” Falchuk said.

“I would tell you from my experiences most voters don’t know what the state’s priorities are,” he said.

Berwick, considered the longest of shots among the five declared candidates, is focusing his campaign on improving the Massachusetts health care system.

More than a year in advance, it’s difficult to predict which issues will dominate the race. At the moment, the Boston media are focused on the mayoral election, which also features a broad field that includes Mike Ross, a councilman who has close Jewish community ties.

Grossman acknowledges that the gubernatorial campaign is in its infancy. But he does know one thing for sure.

“Running for governor, I’m aspiring to take the leadership to the next level,” he said, “always remembering my own Jewish values.”