Leaving the Lower East Side, a search for home 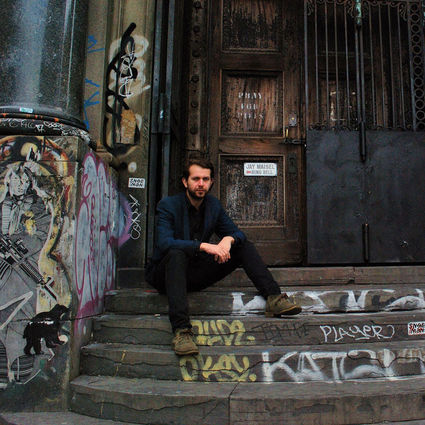 NEW YORK (JTA)—“You live in Brooklyn now. Stay there!” my father screamed at me. He slammed the door to my parents’ renovated tenement apartment in my face, exiling me from the Manhattan home and Lower East Side neighborhood in which I had grown up. I was a 20-year-old college dropout, a disgrace to my education-obsessed Jewish family.

My mother had earned her doctorate in neuropsychology and spoke fluent Yiddish, Hebrew, German and Spanish. Her mother, my bubbe, had a doctorate in child psychology. They viewed my depression at my isolated Vermont university campus as a failure. It was a terrible shonda not to get a degree.

After all, our Jewish ancestors had suffered so that I could become a learned scribe. Marked with chalk as they passed through Ellis Island, labeled like imported produce, they hoped that in this strange new country, future generations could escape the poverty, persecution and death of the Old World; that they could shape American educations into money, security and safety.

The truth was, being raised on the Lower East Side of the early ’90s, I had felt completely out of place. I was the only Jew in my class until junior high, and I spent more time studying Torah in Hebrew school in preparation for my far-off bar mitzvah than on play dates. I had missed the boat, literally: My great-grandparents on both sides had come through Ellis Island on steerage decks of third-class freighters, gazing in awe at the Statue of Liberty, but taking its symbolism with a dose of immigrant cynicism.

The Lower East Side of the ’30s was an Eastern European shtetl transplant, an unruly Jewish village struggling through the end of the Depression. Its tenements teemed with immigrants who practiced wild customs—matchmaking, interpreting prophesies from dreams—that they had imported with silver menorahs hidden under rags during the ocean passage. Beneath elevated trains hurtling over Allen Street, downtown Manhattan was filled with windowless sweatshops where thousands of laborers worked 14-hour days and klezmer music whined faintly through the streets.

My grandmother was the toughest girl boxer on Houston Street in the 1930s, and my grandparents met and married at the Educational Alliance. At least my bubbe and zayde had a support system, a community of Eastern European immigrants who helped each other through the Depression, sharing hot knishes and commiserating from their pushcarts.

Or at least that’s how my grandparents remembered it 50 years later from their Long Island home, sipping gin and tonics in their backyard swimming pool. They’d been happy to escape the Lower East Side and didn’t quite understand why their daughter wanted to raise her family there with her artist husband.

But “Zaest frim an alta shtut macht a naya shtut,” my bubbe always said in Yiddish. “From an old city, we build a new one.”

The downtown they remembered now had rents rocketing to thousands of dollars a month. All of a sudden condos and celebrities made the Lower swell with the success I didn’t have. Tatum O’Neal moved into the old Jewish Daily Forvertz newspaper building. My mom bought $12 treif prosciutto at Whole Foods on Houston.

Once more I felt like a stranger on my old Manhattan streets. All I could afford was one pair of ripped jeans, an oversized hoodie and Bushwick.

Mom and Dad refused to help me move to Brooklyn, so I enlisted bubbe’s help. Though I had kept her nurturing presence out of my life, afraid she’d pinpoint me as a no-goodnik, she seemed pleased to drive my few possessions over the Williamsburg Bridge in defiance of Dad, her irreverent son-in-law.

Since I grew up with more than enough ghetto swagger, I thought I could handle living in my dingy new railroad flat in Bushwick. At $500 a month it was worth it. At least in the outer boroughs, I felt like I belonged.

Then, after only a year, I was robbed in my apartment, waking up to blue flashlights waving around my darkened living room. I hid under my covers until the intruders left, untouched but shaking under thin sheets.

At 22, I fled farther out, into Ridgewood, Queens. My next apartment started out successfully. I had begun a small magazine for which I had big hopes and moved in with my co-founder. But soon she began sending me angry ALL CAPS emails about deadlines from the next room on a Sunday. Still, the magazine gained some legitimacy, the pressure ruining any relationship I had left with my co-founder but strangely fixing the broken bond with my family.

Achievement wasn’t redemption, but for driven Jews who for generations had been pursuing the American dream, it helped. As I neared my mid-20s, I found myself spending more time back on the Lower East Side, craving a stability Brooklyn had never provided. I began to become more interested in the intelligence legacy my immigrant ancestors had left for me. My parents helped me pay to take more college classes on the way to graduation, clapping loudest at magazine events and readings I organized.

After six years away, I saved my shekels and found an apartment in my old neighborhood. Everything was overpriced, everyone was overdressed and no one cared about the people and landmarks that populated my past. Music snobs stood in endless lines outside the Bowery Ballroom without realizing my elementary school bully Robert was stabbed to death in that phone booth on the corner. I smiled at the celebrity-studded rooftop film screenings at Seward Park High School—not for the flashbulbs but because my grandmother had graduated from the school.

My new bedroom on Henry Street was down the block from my father’s old gallery space, my grandfather’s first bachelor pad and yeshiva where he studied to become a rabbi, my great-grandfather’s long-gone kosher butcher shop, and the wooden planks that used to spread over the East River, a rickety and dangerous boardwalk, always shifting under your feet.

At 27, I was a 10-minute walk from my parents and the scene of my childhood, a place crammed with naive paintings and antique furniture rescued from dumpsters, Israeli folk albums and clay menorahs I had crafted as a child that Mom still lovingly lit every Hanukkah.

Living with my folks hadn’t worked; neither had living away from them. Close by we found our perfect center. Bubbe’s old Yiddish wisdom about how from the old city we build a new one also applied to relationships and family. In a changing city, their love was constant.