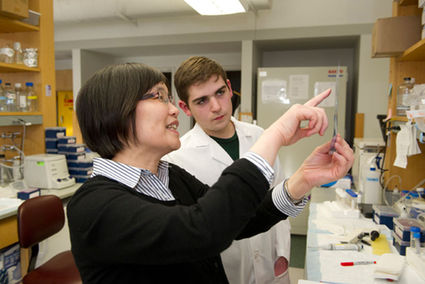 Max Wallack with Wendy Qiu, who heads the Laboratory of Molecular Psychiatry in Aging at Boston University’s Alzheimer’s Disease Center.

(JTA)—Max Wallack was 6 years old when his beloved great-grandmother Gertrude came to live with him and his family in Natick, Mass.

For four years he helped his parents take care of her and saw firsthand the effects of Alzheimer’s disease on her. But Wallack also noticed that when she and other Alzheimer’s patients would do simple jigsaw puzzles, their mood would lighten.

The observation would change him forever.

“Patients were so often depressed and agitated, but after they would do a puzzle, they were happy,” he said.

In 2007, Wallack began researching the role these puzzles had in assisting those with Alzheimer’s disease. He discovered that not only did the puzzles help boost the patient’s self-esteem, but they also helped slow the progression of the disease. Wallack started collecting puzzles and eventually struck up a collaboration with Springbok Puzzles to design a line of puzzles specifically for those with Alzheimer’s.

His bar mitzvah project became PuzzlestoRemember, a non-profit that provides jigsaw puzzles to patients at Alzheimer’s and veteran’s facilities internationally. Since its inception, the organization has distributed more than 23,000 puzzles to 2,000 facilities.

Today the 17-year-old is a rising junior at Boston University, where he has been spending the summer working at the Laboratory of Molecular Psychiatry in Aging at BU’s Alzheimer’s Disease Center. He hopes to attend medical school in a few years.

Wallack, who skipped kindergarten and fifth grade, was recently awarded the Diller Teen Tikkun Olam Award for his service project. He plans to apply a little of the $36,000 prize toward his research and “a lot towards my tuition,” he said.

Working with Alzheimer’s patients, Wallack said, “really is my calling; it’s really important to me.”

JTA spoke to Wallack about his plans for the future, his biggest influences and how he still makes time to have fun.

What sort of puzzles have you found are best for people with Alzheimer’s disease?

Usually puzzles that have bigger pieces but are the same dimensions of a large [500-piece] puzzle but in 12 or 36 [total] pieces, with colorful, vivid, memory-provoking scenes.

The two biggest influences in my life have been Jan Davidson from the Davidson Young Scholars Program for gifted children. She started me on my path. And my great-grandmother for showing me what I’m going to do for others.

What do you think you’d like to be doing professionally in perhaps five or 10 years?

I want to be a geriatric psychiatrist, interacting with patients and their caregivers, but I also want to be doing research.

Shabbat is really important. I try to really think about the week—what I’ve done and what I’ll do and how to be a better person.

What advice would you give other teens interested in launching a service project?

Try something you’re passionate about and do it. Even the smallest thing, it will grow from there.

I like biking, swimming, Ping-Pong, video games, billiards. I try not to procrastinate. I have a lot to do.

The Teen Heroes column is sponsored by the Helen Diller Family Foundation, which is dedicated to celebrating and supporting teens repairing the world. To learn more about the foundation’s $36,000 Diller Teen Tikkun Olam Awards, visit http://dillerteenawards.org. Please tell us about teens who deserve attention by sending an email to teens@jta.org.