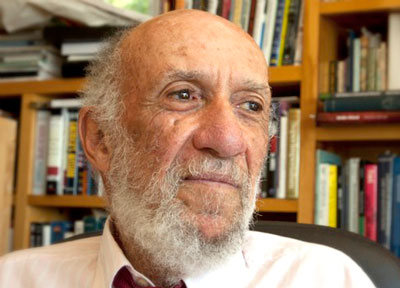 This is very interesting...

This comes directly from the World Jewish Congress Digest. It is something that has been bothering many of us:

“The United Nations special rapporteur on human rights in the Palestinian territories, RICHARD FALK, is notorious for outrageous comments.

In his latest verbal spew, he said that the Boston Marathon bombings were directly attributable to America’s policy on Israel.

“World Jewish Congress President Ambassador RONALD S. LAUDER called Falk’s comments linking the bombing to U.S. foreign policy ‘despicable,’ adding, ‘As an American, I am deeply ashamed that such shocking statements would be held by a fellow citizen. I am even more horrified by the fact that Falk holds a place of prominence at the United Nations, an institution already sullied by its one-sided approach towards Israel.’

Both Falk’s past and current provocations have prompted major Jewish organizations, led by WJC and joined by UN Watch, to call for his removal.”

(For those who may not know him, Falk is an American professor emeritus of international law at Princeton University, the author or co-author of 20 books and the editor or co-editor of another 20 books, speaker, activist on world affairs, and an appointee to two United Nations positions on the Palestinian territories. In 2008, the United Nations Human Rights Council appointed him to a six-year term as a UN Special Rapporteur on the situation of human rights in the Palestinian territories occupied since 1967. Some of his official reports, as well as other writings, have been criticized by UN Secretary General BAN KI-MOON and others.)

Looking back at things I’ve written many years ago, some still hold true today:

I’ve really been trying to eat healthy these days. But that brings a lot of questions to mind.

For instance... today we are urged to eat cereals with names like Nutri-Grain. (Isn’t that something they feed cows in Nebraska?)

And Fiber One. (That sounds like a classification of racing cars.)

Then there’s Product 19. (So nu? Whatever happened to Products one through 18?)

With this healthy trend the government will be requiring new food labels... like “No Fat,” “Low Fat,” “Reduced Fat,” “Fat, but a great personality.”

I also hate how my supermarket is always rearranging things. “Product Placement” is what they call it.  The other day I had just enough time to run in for a jar of spaghetti sauce and couldn’t find it... but I learned something important... my spouse will eat peanut butter on anything. That night we had Skippy fettuccine!

And how about this burning question? ...Why is it that lemon pie filling and lemonade are made with artificial lemon flavoring, but dish soap and furniture polish are made with real lemon juice?

(If you know the answer, call me.)

Once again, NANCY LUDIN, executive director of the Jewish Pavilion emailed me:

Music is the universal language and the ideal way to connect to our elders.”

PENNY GOLDSTEIN D’AGOSTINO is a true mensch, bringing joy to hundreds of residents a year through music.

At Hanukkah time, Penny entertains at more than 20 facilities all over town. She knows how to entertain large crowds, singing popular music from the 1920s and ‘30s.

Penny uses a karaoke machine so that everyone can see the words and sing along. She includes in each concert, beautiful Jewish music like ‘My Yiddisher Mama’ and ‘Bir Mist du Schoen.’ Those two songs always bring joy and tears amongst the Jewish residents in her audience.

(‘My Yiddisher Mama’ also brings tears to my eyes when I sing it or when I hear somebody else sing it. I think of my dear departed Mom, Sally Golub.)

(Hey, I’m not THAT old!  I read about the era of the “Roaring Twenties” just like you did. I wasn’t around then!  Well... almost.)

All “us” music lovers are invited to a Great Gatsby Party!

There will be music for dancing provided by the fabulous TERRY MYERS Group; a buffet (yes food!); a silent auction; and a cash bar.

1920’s attire is optional... but oh so much fun to wear feathered hair bands, tassels and long beads and net hose going only up to the knees.

For further information and to RSVP, go online to centralfloridajazzsociety.com or phone SHELDON BROOK at 407-422-8529.

(I’ve been having spine trouble... I’d better hurry and get better so I can Charleston at the Great Gatsby Party!)

I’ve been going to the Spine Health Institute of the Florida Hospital headed by Dr. CHETAN PATEL, twice per week for exercises to help me feel better.

(Sure... it feels like he’s torturing me each time I’m in his care, but when I leave I feel so much better!)

Not only does Chris know his stuff, he has a great sense of humor... takes all my complaints with a “grain of salt” and tops me with his funny lines every time. I feel so lucky and privileged to be in his care. I know he is getting me better and maybe (with some luck) he can make me prettier and younger!

(I wouldn’t dare say that in his presence because his comeback line will surely top mine!)

Thanks, Chris, for all you do.

It’s all about the Navy this time:

Seaman JOSEPH GLUFRE completed U.S. Navy basic training at Recruit Training Command in Great Lakes, Ill., and so did Seaman JEFFREY AYBAR. I wonder if they know each other, especially since they both attended the University of Central Florida right here in Orlando and are recent graduates.

(And mazel tov to my eldest son, DAVID, on becoming a Lieutenant Commander in the Navy. Oy, am I proud!)

A little girl was talking to her teacher about whales.

The teacher said it was physically impossible for a whale to swallow a whole human because even though it was a very large mammal, its throat was very small.

The little girl stated that Jonah was swallowed by a whale.

Irritated, the teacher reiterated that a whale could not swallow a whole human... it was physically impossible.

The little girl then said, “When I get to heaven I will ask Jonah.”

The teacher then asked, “What if Jonah went to hell?”

The little girl replied, “Then you ask him.”