At Yom Kippur, a heads-up on chest thumping 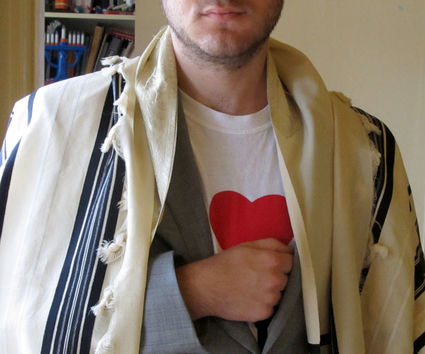 On Yom Kippur, tapping on your chest, the door of your heart flies open.

LOS ANGELES (JTA)—On Yom Kippur, when we beat our chests during the confession, maybe we should be knocking instead on our heads. After all, isn’t that where all the trouble starts?

On this most physically demanding of Jewish days, Jewish tradition has us beat the heart side of our chests, as if to say this is the source of our falling short.

During the Viddui—the confessional portion of the service composed of the Ashamnu and Al Chait—some of us tap, some of us rap, some of us pound really hard. Many do nothing, perhaps wondering if this is some kind of Jewish self-flagellation.

Those who tap are reminded, without leaving marks, of the connection between spirituality and physicality. But are we choosing the right body part to make our confession meaningful?

In the Bible, it is widely accepted that the heart—in Hebrew, lev—is the seat of emotion. Maimonides even linked the heart with the intellect.

However, in the brave new science guy world in which we live today, while we’re standing in shul tapping our hearts, our focus could easily turn from confession to hypertension.

So what about lightly tapping the side of our heads instead with a why-did-I-do-that kind of knock? Isn’t the head the place where, working in discord, our mouths and minds create the tsouris we confess?

Beginning with Rosh Hashanah—literally head of the year—our heads are in our rituals. We put tefillin on our bicep, next to the heart—unless you’re left-handed, like me—but we also wear tefillin on our head, before our eyes. On Friday nights when parents bless their kids, their hands are placed on the heads of their children.

Confusing head and heart even more, in Psalm 90, an ideal is held up of obtaining a “heart of wisdom.”

So which to tap, heart or head?

To Rabbi Goldie Milgram—the founder of Reclaiming Judaism, an organization seeking Jewish innovation and “maximal involvement,” and author and publisher of a number of books on creating a meaningful Jewish life—striking one’s chest on Yom Kippur is an acknowledgment that “I am out of alignment.” Tapping on the chest is a way to realign, Milgram said from the Alliance for Jewish Renewal Aleph Kallah in New Hampshire, where she was teaching.

Milgram, who has master’s degrees in social work and Hebrew letters, says that Judaism can be approached from the point of view of a gestalt psychologist. “People want to get things integrated into their bodies,” she said.

When I asked Milgram about my idea of tapping on one’s head, she wondered why I would want to do that.

“What would you get from it?” asked Milgram, “Reb Goldie” to her students.

“It would remind me of the source,” I responded, seeing yet again that my ideas were getting me in trouble.

“In Judaism, the heart is the seat,” she reminded me. “Your awareness of ‘ahavat Hashem’ [love of God] starts in the heart,” the rabbi added, explaining that seeing the head as the center is a Western tradition.

Milgram also interprets tapping on the heart as a kind of drumming. “The body is the instrument,” she said, making a connection between drumbeat and heartbeat, and suggesting that while we are tapping to “listen to both your head and your heart.”

Striking the chest is “a form of dancing one’s prayer,” Milgram said.

Offering perhaps a new dance step, she suggested I try moving my finger in a circular motion slowly over my heart. I tried, it was definitely soothing, and I could see how the continuity of motion might help me through the more personally applicable “we have sinned against you’s—but wondered if it would look weird.

“People are doing it,” she offered, pointing out that in her work, she has encountered a diversity of customs.

“What should I think about while I’m doing it?” I asked, recalling that while reading the lines of Ashamnu, instead of focusing on the individual lines, I would sometimes get caught up in the acrostic of shortcomings, wondering what the machzor would use for “X.”

Ask “What is my resistance to aligning with the mitzvah of caring for myself?” Milgram said, also suggesting that I make a list, noting aspects of body, family and Judaism where I would like to be more in alignment with the mitzvot. She also advised “to forgive myself,” pointing out that just striking my chest was not enough, “one has to engage afterwards.”

“Tapping on your chest, the door of your heart flies open,” she observed. “That’s the beginning of teshuvah,” she said, mentioning the Jewish concept of returning, or asking forgiveness, that beats through the Yom Kippur liturgy.

The Viddui, she said, is written in the “ ‘we.’ We take responsibility.”

For that I would need both heart and head.