From Russia with love-a gift for the world? 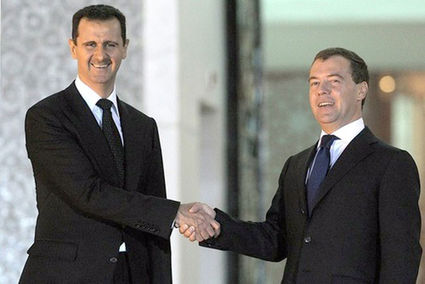 Like the biblical Jacob, U.S. President Barack Obama sees a ladder in his dreams. But instead of God at the top, the American president sees his Russian counterpart Vladimir Putin. The Russian president, with his proposal that Syrian President Bashar al-Assad transfer his chemical weapons stockpile to international hands, will ultimately save Obama from ordering an attack. It’s not clear what is preferable to Obama—Putin’s solution or a “no” vote from Congress. Either way, Obama—regardless of what the future holds anymore— will go down in history as an American president who led from behind (a term taken from his own lexicon pertaining to an attack on Libya, which was led by Britain and France).

Even if the Americans have yet to fire a shot in Syria since the chemical attack on Aug. 21, the war between Assad and Obama has already begun—a war of words. Obama is threatening to attack, and Assad, in televised interviews, is vowing to respond. And we are still at the stage of talk followed by more talk.

From the onset of the Arab uprising in 2011, it was clear that the situation in Syria was the most complex. Too many countries were involved. Putin understood the potential. While Obama was expected to finally take the lead, as world leaders do, Putin came along and changed the rules of the game. Putin, in contrast to Obama, made an attractive offer on Monday, primarily in the eyes of an international community averse to war. At this rate, Putin will also steal Obama’s Nobel Peace Prize for his work in Syria, Chechnya and Russia. Putin can be proud. He has given the world a gift—from Russia with love.

We can now expect talks over the Assad regime disarming itself of chemical weapons. Do you remember the Iranian ruse in Geneva in October 2009, when Tehran agreed to renew nuclear negotiations? This could be similar.

And let us assume for a moment that we are just being pessimistic, and that Assad, inspired by the horrible events in his country, has had a change of heart. Let’s assume for a minute that he is ready to get rid of his unconventional weapons without being attacked. And then the pundits will declare Obama a genius, and that his threat to attack was only to persuade Assad to dump his chemical weapons peacefully. So maybe the military option does have value? Perhaps it has value in Iran as well? And maybe the winner is Assad, because after Obama threatened him with a “limited” attack, he threatened in his interview with Charlie Rose to set the Middle East on fire, and Obama then settled for a compromise?

We are still far from the end of the story, while it is still entirely unclear what Obama wants. Simultaneously, how ironic is it that the role of the U.N. Security Council is to maintain international peace and security through “prompt and effective action,” as stipulated by article 24 of the U.N. charter? What a joke.

We only have one lingering problem: Will Assad go unpunished for exterminating 1,400 civilians (the world is prepared to forgive the 100,000 others he has killed with conventional weapons)? The Americans, not unexpectedly, will explain that a regime change will also be on the table at the Geneva 2 summit. But also sitting prominently at the table will be delegates from Iran and Syria. While we’re at it, why not invite Assad, too?

Boaz Bismuth is a columnist and correspondent for Israel Hayom, where this column first appeared.