In honor of those who walked before us 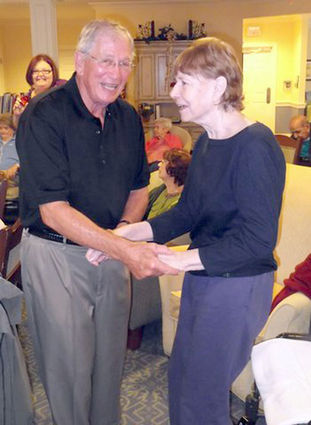 Harvey and Nancye Kobrin dance at a Jewish Pavilion Hanukkah party at Serenades by Sonata in December 2012.

The Jewish Pavilion’s annual “Walk in the Park” will be co-sponsored this year by philanthropists Harvey Kobrin and Chuck Steinmetz, in honor of their wives, Nancye Kobrin and Lynn Steinmetz. This free event will be held Oct. 27, beginning at 9:30 a.m. at Cranes Roost Park in Altamonte Springs.

Kobrin has a long history of giving in the Jewish community. Most notably, in 1972 Harvey and brother, Phillip, donated the Maitland property on which the Roth Jewish Community Center is housed.

Longtime friend and University of Florida fraternity brother, Chuck Steinmetz, and his wife Lynn, committed $5 million to the University of Florida to create five new permanent endowments, including three professorships, an entrepreneurship fellowship fund, a research fund and additional support for an existing student scholarship fund.

“My wife, Nancye, was quite a lady,” said Kobrin about his late wife of 33 years, who passed away in February 2013. “Nancye always put people at ease. If we were at a party, and someone was by themselves, they found a friend in Nancye.”

Kobrin tells an anecdote about a time “years ago” when they attended a local fundraiser in honor of President Ronald Reagan. “Everyone was crowding around Reagan, trying to say hello,” Harvey remembered. “It was Nancye’s natural inclination to give him some space. Next thing we know, Reagan is leaving the crowd and comes over to say hello to us. Nancye had that kind of effect on people.”

Kobrin shared that Nancye’s interpersonal skills helped her excel as a mother of a blended family of eight, an executive at Winter Park Federal Savings and Loan, and as a community leader. “Nancye was kind but very straightforward. She was above board in everything that she did,” he said.

Nancye Kobrin served as president of the Junior League of Greater Orlando, UCF’s Town and Gown Council, and as a contributor and supporter of Orlando Health. In 2001 the generous couple donated $1 million dollars to help build the MD Anderson Cancer Center in Orlando. In 2006 Harvey and Nancy established the Kobrin Family Foundation to solidify their philanthropic pursuits.

“Nancye was all about family,” said Harvey. “She knew that family, and giving back were the only things that truly mattered.” The couple married in 1978, both for the second time. Their combined family, now made up of eight children and twenty-one grandchildren, reside from Orlando to Colorado, to New York. All 38 members of the immediate family reunite for the Thanksgiving holiday.

About nine years ago Nancye was diagnosed with Alzheimer’s disease. Harvey cared for her in their Winter Park home for six years. When Nancye required more assistance, she moved into Spring Hills in Lake Mary, and then Serenades by Sonata, a memory care center in Longwood. While at Serenades, Harvey took note of the services of the Jewish Pavilion. “I have known the girls who started the Pavilion for years,” he commented. “I met (Pavilion co-founder) Sheryl Meitin years ago. I walk with Barney Chepenik, husband of Claire (Pavilion co-founder), every morning at 5:30 a.m.” Harvey continued, “The Pavilion volunteers came for just a handful of Jewish residents. Suddenly, a roomful of residents were provided with both companionship and Jewish experiences. You hear about these things, but when you see it firsthand, it makes a difference.”

For more information about the event, visit http://www.jewishpavilion.org.