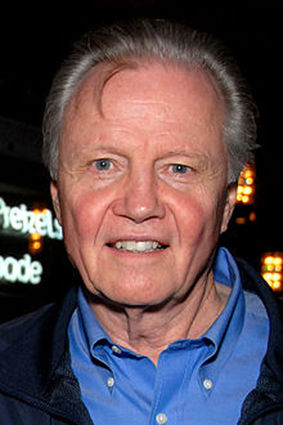 On a recent afternoon at Lenny’s Deli in Westwood, Calif., Jon Voight reached into a black satchel and pulled out a well-worn copy of Paul Johnson’s “A History of the Jews,” then began reading aloud from the text, his fingers carefully tracing the words. Looking professorial, he glanced up from time to time to emphasize a point, his steely blue eyes peering from behind spectacles as he read with a quiet but fierce intensity of Johnson’s admiration for Judaism.

Voight, 74, remains tall and trim, his blond hair now silver and slicked back; he’s a familiar figure from his Oscar-winning turn in 1978’s “Coming Home” as well the film classics “Deliverance” and “Midnight Cowboy,” the latter earning him an Oscar nomination for his portrayal of a Texas hustler who befriends Dustin Hoffman’s “Ratso” Rizzo.

Voight also has become equally well known as the father of Angelina Jolie, with whom he is now reconciled after a decade-long falling out; and he’s a vehement spokesperson for conservative political causes. Meanwhile, he’s now starring in a hit Showtime series, “Ray Donovan”—the network renewed the show for a second season—in which he portrays the scheming patriarch of a fraught Irish-Catholic family.

But the most urgent topic of discussion during a recent 90-minute interview was his seemingly tireless support for Israel and the Jewish people—even while he remains a lifelong Catholic—as well as his ubiquitous presence on the annual “To Life” Chabad telethon, which aired on Aug. 25.

Voight is well aware of the incongruous spectacle of himself wearing a yarmulke and dancing with Chabad’s bearded rabbis on the show: “It’s just a funny image, and I see the humor and the irony in it,” he said.

So why is Voight so into Jews and Judaism?

It’s a love affair that hails back to his childhood in Yonkers, N.Y., when his father was the golf professional at a local German-Jewish country club. “He started caddying there when he was 8, and the membership took a shine to this young scamp and encouraged him; they were like magical aunts and uncles,” Voight said. “There’s no doubt they gave him a sophistication that his siblings didn’t have.

“In my raising, if there were enemies of the Jewish people, they were my enemies as well. And as I got older, I became interested in the roots that had created this great culture.”

Voight’s Jewish studies began in earnest in what he describes as a period of “spiritual seeking” in the 1980s: “I came to a crisis point about many things,” he said. “I had made some mistakes in my early life, and I needed to recover from them,” he wrote in an essay for Chabad.

Voight eventually immersed himself in the Hebrew Bible as well as the work of Rabbi Abraham Joshua Heschel and Elie Wiesel; in the course of our conversation, he discussed with ease scholars from Maimonides to the Maharal, whose grave he visited while in Prague shooting the film “Mission: Impossible.”

Voight met Rabbi Boruch Shlomo Cunin, Chabad’s West Coast director, when a telethon creator asked him to appear on the show in 1986. “When I showed up to Chabad’s drug rehabilitation center,” he recalled, “there was a long line of guys—tattooed and muscular—in front of a table where a hefty [rabbi] with a beard was arm-wrestling them, one by one, and he would just knock down their arms like they were flies.

“Later on, at his office, there was a couple sitting on a couch who needed some furniture, and Cunin said, ‘What about this couch we’re sitting on? Jon, help me pick this up.’ And so we carried it down to my jeep and took it to this couple’s apartment. I was so deeply moved, because it was so spontaneous, from the heart, and a response to a human need. That sealed the deal with Chabad for me.”

Voight went on not only to become a fixture on the telethon, but a student of the work of Chabad Rabbi Menachem Mendel Schneerson, as well as a staunch advocate for Chabad charities on behalf of Chernobyl victims and other causes.

Along the way, he continued his vociferous activism on behalf of Israel; in an open letter in the Washington Times in 2010, he accused President Obama of lying to the Jewish people and promoting anti-Semitism by having “propagandized” against the Jewish state.

Asked whether he has received flak for his words in left-leaning Hollywood, the actor shrugged and said, “If people don’t like me for any reason, they don’t have to hire me. If my politics are disliked by somebody, that’s all well and good as far as I’m concerned.”

Voight, of course, has a number of Jewish friends in show business, including his “Midnight Cowboy” co-star Dustin Hoffman, who gave him some crucial words of encouragement as Voight was rehearsing for an off-Broadway revival of Arthur Miller’s “A View From the Bridge” in the mid-1960s.

Hoffman, a friend of the play’s director, had just watched a run-through of the production when he turned to Voight and said, “ ‘You’re in the right business; you’re going to be very good at this,’ ” Voight recalled. “Whatever clumsy experiments I had been making at the time, it was in my heart to become a quote-unquote great actor, and those few words from Dusty announced my arrival.”

Several years later, Voight starred with Hoffman in 1969’s “Midnight Cowboy,” but, he said, he was initially reluctant to accept the role of an Atlanta businessman who embarks on a harrowing river trip with several friends in “Deliverance” (1972). In fact, he was so put off by the sequence in which one of his character’s friends is raped by hillbillies that he immediately stopped reading the screenplay, “which felt like a horror movie to me,” he said.

His perspective changed when he read through the entire script with Marcheline Bertrand, the woman who was to become Voight’s wife and Jolie’s mother: “She was smart about these things, and the rape scene didn’t bother her at all,” he said. “I started seeing it through her eyes, and thought, “I can see myself doing this.’”

Voight and Bertrand separated when Jolie was just 2 years old, and father and daughter had a famous falling out in the early 2000s, when he publicly accused her of having “serious mental problems,” while she reportedly criticized him for his part in the dissolution of the marriage. The reconciliation began, according to news accounts, several years ago, during a meeting in Venice orchestrated by Jolie’s partner, Brad Pitt, and now Voight is overjoyed to be reunited with his daughter as well as his six grandchildren.

“I just saw my grandchildren two days ago,” he said. “I went through a lot in my life, and my family is the most important thing in the world to me. I’ve learned a lot from my mistakes, as most humans do. And I’m having a wonderful time watching my grandchildren grow. I do absolutely spoil them.”

Voight added that he has encouraged Jolie, an activist in her own right, to visit Israel: “I don’t know if she will, but I would love to see her do that,” he said.

Voight’s family reconciliation is perhaps one point of connection he finds with his character of Mickey on “Ray Donovan,” which stars Liev Schreiber as a Hollywood “fixer” who makes celebrity scandals disappear.

Schreiber’s character of Ray wants nothing to do with his father, Mickey, an ex-con who has been unexpectedly released from prison after 20 years and wants to insinuate himself back into his family.

Mickey proves to be a doting, if highly unconventional, even crude, grandfather, as well as a seasoned criminal: “I love that the character is so outlandish,” Voight said with a laugh. “He’s a mess; he’s as bad as it gets in some ways.”

The series opens as Mickey gets out of prison and promptly murders the priest he believes has molested his younger son, Bunchy, as a boy. When he’s not bonding with his grandchildren, Mickey can be seen doing cocaine with his alcoholic son, spewing pedophilia jokes at Bunchy’s sexual abuse support group, or frolicking in just a towel while smoking a joint and dancing with a hooker. “The energy of that scene was so terrific; I just loved the craziness of it,” he said.

Voight is also fond of the many Jewish references on the show; Ray has a burly Israeli enforcer named Avi, who was once imprisoned in Lebanon, as well as a mentor, Ezra (played by Voight’s old friend Elliott Gould), who is sitting shivah for his wife.

Gould was to join Voight on the Chabad telethon on Aug. 25 [after the Heritage deadline], where the two actors may well kick up their heels to horah with the dancing rabbis.

Naomi Pfefferman is the arts & entertainment editor at the Jewish Journal of Greater Los Angeles.