Where do Jewish federations draw the 'red line' on opinions about Israel? 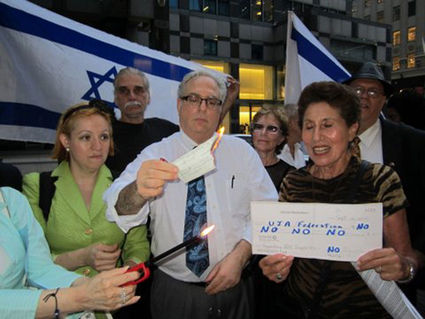 Richard Allen (center), head of JCC Watch, holds a burning check at a rally on Sept. 12 during which his group as well as Americans for a Safe Israel urged the cessation of Jewish donations to the UJA-Federation of New York, due to federation’s lack of funding guidelines on Israel.

The “red line” associated with Iran’s nuclear program or Syria’s use of chemical weapons has sparked an ongoing international debate, in which both Israeli and Diaspora Jews have made their voices heard. But a debate that hits closer to home for American Jews is about where Jewish federations in their communities draw the line on funding programs associated with varying opinions about Israel.

In the Boston area, a recent test case for the local Jewish federation—Combined Jewish Philanthropies (CJP)—revolves around its relationship with Leonard Fein, the founder of organizations including the National Coalition for Jewish Literacy, Moment Magazine, and MAZON: A Jewish Response to Hunger. In an Aug. 24 column for the Forward, Fein called for a boycott of the Israeli city of Ariel, which is located beyond the 1949 Israeli-Arab armistice lines.

“Specifically, I believe American Jews visiting Israel should stay away from [Ariel], treat it as an offense against peace,” Fein wrote.

Fein has been a guest speaker for CJP and has a long-term relationship with that federation’s leadership groups. Asked if that relationship would change due to Fein’s stance on Ariel, CJP Executive Director Barry Shrage said it would not, and regarding whether CJP is willing to continue to invite Fein as a speaker, Shrage said, “Sure.”

“Certainly an argument about settlements, and how to protest settlements and how to support settlements, is part of the daily life of the Jewish community that has a healthy ongoing debate about important issues,” Shrage told JNS.org.

While Shrage believes Fein’s call for a boycott of Ariel was “a very poor tactic,” he stressed that Fein is “a highly respected member of our community.”

“We’d be so much poorer a community if we drive out people like Leonard Fein,” Shrage said. “The future of the community is about binding people together.”

But Charles Jacobs, head of the Boston-based advocacy group Americans for Peace and Tolerance, believes CJP crosses a red line by continuing to work with Fein. Jacobs called the policy of welcoming a “big tent” of organizations and individuals with varying views on Israel a “slippery slope.”

“The CJP-certified Leonard Fein is now one more slip down the slope,” Jacobs told JNS.org. “Leonard Fein, who in the midst of Middle East madness, where Arabs are murdering and gassing and torturing each other—and each others’ wives and children, from Cairo to Damascus to Baghdad—Fein blames Israelis for the lack of peace in the region.”

“Beholden to major donors, many of them on the left, it seems that some federations have become disconnected from the larger Jewish community,” Jacobs said. “So if CJP does not excommunicate Fein—if it has no red lines—it will show just how disconnected it has become.”

Shrage said CJP does have red lines. Advocating for the destruction of Israel or harming Israel are “stances that place people outside the community,” but Fein is “a Zionist” and working with him does not cross a line, despite his stance on Ariel, according to Shrage.

“The line here is whether you are anti-Zionist, anti-Israel,” he said.

Fein told JNS.org that while he called for a boycott of Ariel because its location 10 miles beyond the 1949 armistice line presents “a very distinctive problem” and “essentially destroys the possibility of a two-state solution,” he opposes the broader Boycott, Divestment and Sanctions (BDS) movement against Israel.

“I think each potential target of that kind of approach of boycott, divestment and sanctions needs to be treated on its own terms, on its own merits, or lack of merits,” Fein said, explaining that he disagrees with a movement that issues boycott calls “with a broad brush,” like the BDS movement does.

Shrage called hosting Fein a “far cry” from hosting BDS activist Alice Walker, author of “The Color Purple, who appeared at New York’s 92nd Street Y in May. The Y also scheduled an event this spring with Roger Waters, the anti-Israel Pink Floyd band member, which was ultimately canceled. On Sept. 12, JCC Watch and Americans for a Safe Israel partnered on a protest outside the UJA-Federation of New York building that called for Jews to stop donating to the federation, due to a lack of guidelines preventing federation funding of programming that gives a platform to anti-Israel voices like Walker and Waters. The Y receives $900,000 annually from the federation.

“We have a pattern of forces within the UJA-Federation diverting charitable dollars to further political purposes, and these purposes are anti-Israel,” Richard Allen, head of JCC Watch, told JNS.org.

When a UJA donor and volunteer told Allen at the protest that the funding in question is “only a small part” of the federation’s budget, Allen said he replied, “Even if it’s one penny, it’s wrong, and it makes the whole organization basically treif.”

The UJA-Federation declined to comment for a JNS.org article on the Sept. 12 protest and did not return a comment request for this article.

Like JCC Watch, Citizens Opposed to Propaganda Masquerading as Art (COPMA) is calling for a halt to donations to its local federation, citing the Jewish Federation of Greater Washington’s funding of the Washington DC Jewish Community Center’s Theater J.

COPMA was formed in 2009 as a response to Theater J’s work on “Seven Jewish Children: A Play for Gaza,” a series of short plays in which parents repeat anti-Israel narratives while mulling how to speak to children about the Israeli-Palestinian conflict. One actor advises a parent not to tell a child that “Arabs used to sleep in her bedroom.”

Robert G. Samet, COPMA’s chairman, said his group does not intend to impede artistic freedom, but rather specifically opposes the federation’s support of Theater J.

“It’s just, don’t do it on our nickel,” Samet told JNS.org. “Don’t do it on [federation] contributors’ support, it’s not appropriate. It’s a fringe view that’s being supported by mainstream contributors.”

In an Aug. 26 letter to the DC federation, Robert Levi—chairman of the board of the National Council of Young Israel—joined COPMA’s call for the discontinuation of federation support for Theater J, due to the theater group’s planned performance of Motti Lerner’s “The Admission” from March 20-April 27, 2014.

“As you may be aware, [‘The Admission’] reflects a neo-anti-Israeli perspective, which is contrary to the mission of the Federation,” Levi wrote. “The climatic scene of play implies a fictitious 1948 massacre conducted by a colonel in the Israeli defense brigade. You may not be aware that many of Mr. Lerner’s dramas are not performed in Israel due to their harmful message.”

Last week, the federation responded to COPMA with an “open letter to our community.”

“Love of Israel and openness to a diverse array of thought are compatible goals,” the federation’s letter stated.

Ari Roth, artistic director of Theater J, told JNS.org that “The Admission” is all based on “actual research done by three historians,” rather than implying the “fictitious 1948 massacre” that Young Israel’s Levi described in his letter. “The Admission” was also featured in an April 2013 workshop that was underwritten by the Israeli Consulate of New York, which Roth called an Israeli “hechsher” on the play.

COPMA does not acknowledge Theater J’s slate of more than 35 plays and workshops relating to Israel over the last 16 years, said Roth, who among other plays the group has performed cited “Dai” (“Enough”), which details the experiences of 14 different Israelis in the moments before a suicide bombing.

The DC federation, in an April 2011 statement, said it would not fund “any organization that encourages boycott of, divestment from, or sanctions against the State of Israel in pursuit of goals to isolate and delegitimize the Jewish State.” Theater J “stands squarely” against the BDS movement, Roth told JNS.org.

“We are all about bringing Israeli art over here, engaging with Israel,” he said. “We are a leading importer of Israeli cultural talent to Washington.”

In its letter on COPMA last week, the federation said it was not its job to meddle in the “autonomous decision making” of its partner agencies, or to “single out a few programs from the thousands we support that may make some uneasy.”

Samet, chairman of COPMA, told JNS.org that it was “only with great reluctance that we went to a mass email campaign urging people to suspend or terminate contributions until such time as [the] federation does something about [the Theater J issue].” But the federation ultimately crossed COPMA’s red line.

“We didn’t want to take it that far, but they pretty much forced our hand by ignoring us, and ignoring the issue,” he said.