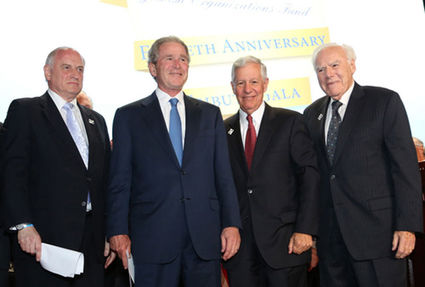 Former U.S. President George W. Bush made a surprise appearance at the 50th anniversary tribute gala of the Conference of Presidents of Major American Jewish Organizations in New York, saying Iran cannot be trusted when it says its nuclear program has peaceful intentions.

One attendee of the event, speaking anonymously because Bush’s comments were off the record, said Bush quoted from his May 2008 speech to the Israeli Knesset. In that speech—one that he called a highlight of his presidency—Bush said America stands with Israel “in firmly opposing Iran’s nuclear weapons ambitions.”

“Permitting the world’s leading sponsor of terror to possess the world’s deadliest weapon would be an unforgivable betrayal of future generations,” Bush told the Knesset in 2008. “For the sake of peace, the world must not allow Iran to have a nuclear weapon.”

Tevi Troy, who served as White House liaison to the Jewish community as well as deputy secretary of the U.S. Department of Health and Human Services in Bush’s administration, told JNS.org that Bush’s appearance at the Conference of Presidents event was “enormously important” because Bush does not appear in public very frequently and has intentionally taken a low profile since leaving office. In particular, Bush takes a low profile “on political issues of the day,” but broke that mold with his comments on Iran, Troy explained.

“The fact that he would go to that kind of event, and also talk about the danger of Iran, which many people said was unfinished business from his administration, for understandable reasons given the economic collapse and the overstretch in Afghanistan and Iraq... the fact that he would go and weigh in on that issue I think is extremely significant and worth noting,” he said.

Bush also spoke about his relationship with the Conference of Presidents, the umbrella organization for more than 50 national Jewish groups. According to an attendee, Bush said the Jewish umbrella’s voice is extremely well informed and helpful, and clearly respects the office of the U.S. president.

Israel is America’s best friend in the Middle East, and the defense of Israel is not only an American value, but is in America’s strategic interest, said Bush, who entered the room to a prolonged applause from an audience previously unaware that he would appear.

“[Bush] has long had very positive feelings toward the state of Israel and been a strong supporter of the security of the state of Israel, and this was really highlighted in the period after 9/11, when the intifada was also going on in Israel,” Troy told JNS.org. “He recognized that Israel’s struggle and America’s struggle were the same, and that Israel’s enemies and America’s enemies can overlap as well.”

The former president said he misses only three things from his time in Washington, DC: not having to stop at stop lights, getting to salute men and women in uniform, and retired U.S. Senator Joe Lieberman.

Lieberman, a vice presidential candidate who was the most prominent Sabbath observer on Capitol Hill, was in the room to hear Bush’s compliment, as he had just presented an award to former Conference of Presidents chairman James S. Tisch.

Bush also said that it is not beneficial for the U.S. to have a past president “bloviating” while the current president is trying to run the country.

The Conference of Presidents event honored Malcolm Hoenlein, the umbrella organization’s executive vice chairman since 1986. Bush joked that Hoenlein, unlike U.S. presidents, has no term limits.

Alan Solow, former chairman of the Conference of Presidents, told JNS.org regarding Bush’s appearance, “I was delighted that he joined us at this event.”