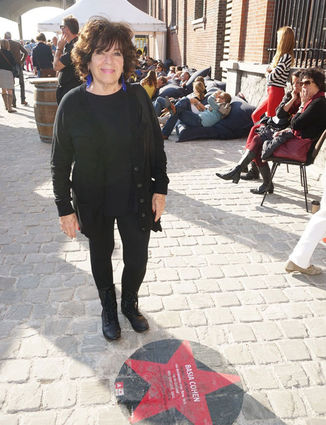 Ellen Bledsoe-Rodriguez near a marker honoring her mother, Basia Cohen, one of the many Jews who fled Europe on a Red Star Line vessel, Sept. 29, 2013.

Bledsoe-Rodriguez is uninterested in such diversions. She and nine of her relatives had traveled 5,600 miles from California for last week’s opening of a museum devoted to the Red Star Line, the maritime travel company that nearly a century ago transported her mother and 2 million others from war-torn Europe to Ellis Island.

“I knew this would be an emotional experience, but I underestimated how emotional it would be,” Bledsoe-Rodriguez told JTA while retracing her  mother’s footsteps into the red-brick terminal she had passed through in 1921 as a third-class passenger from Russia, fleeing the pogroms and persecution that preceded the near annihilation of European Jewry.

To Bledsoe-Rodriguez, the Red Star Line is symbolic of her mother’s will to survive. But to city officials in Antwerp, which funded the $25 million museum, it is a reflection on the “universal quest for happiness” and a response to growing interest in general immigration trends.

“For Belgians, the Red Star Line is reminiscent of the belle epoque, but it means something very different to Jews,” said Michael Boyden, a Belgian literary historian at Sweden’s University of Upsala, who published a critical Op-Ed about the museum in the Flemish-language De Morgen daily. “The museum seems to me like a missed opportunity to research these different narratives more deeply.”

Debates over whether European history is properly understood in particularist or universalist ways are not new in Europe. In recent years, several commemoration projects in Belgium and Holland have been marred by conflict between those seeking to engage wide audiences with universal themes and activists who argue that the fading memory of the Jewish genocide requires specifically combating the anti-Semitism that made it possible.

Luc Verheyen, the museum’s project coordinator, said the museum does not skirt the “tragic element” of European emigration. But it also aims to celebrate the contributions of notables such as Albert Einstein, who boarded a Red Star Line vessel in 1933 bound for New York.

“The museum helps illuminate a forgotten story of 60 million Europeans who left for all kinds of reasons,” Verheyen said.

The Red Star Line operated from 1871 to 1934, a period that coincided with some of the worst anti-Semitic persecution in history. During the line’s 63 years, Jews accounted for at least a quarter of its passengers taken across the Atlantic Ocean in dozens of ships. Historians say the actual percentage may have been much higher.

The first wave of Jewish passengers—including Bledsoe-Rodriguez’s mother, Basia Cohen—were escaping pogroms in czarist Russia. Later waves were fleeing anti-Jewish agitation and the rise of the Nazis. For many years, the Red Star Line offered kosher food to its Jewish clientele.

Cohen left her home at 11 with her mother and five siblings in the hopes of reuniting with her father, a bankrupt beet farmer who had left years earlier. The Cohens spent three weeks in squalid dormitories with 1,500 passengers aboard the ship. At Ellis Island, they were quarantined for eight months because of scalp fungus.

“Somehow the experience at Ellis Island had aged us, we didn’t want to sing anymore,” Cohen said in an interview before her death in 1993. “We were all grown up.”

Among the later refugees was Einstein, whose resignation letter to the Prussian Academy of Sciences, on display at the museum, was written on Red Star Line stationary.

The Jewish dimension is hardly overlooked in the two-story museum. But the exhibition “emphasizes the universal character of migration,” the city wrote in a statement. The official booklet on the museum describes it as “a universal human story about the pursuit of happiness, a story we can all relate to.”

That sort of universalizing of history has prompted protests from Jewish leaders who argue that it degrades the uniquely Jewish character of the Holocaust.

The opening last year of Belgium’s main Holocaust museum at Mechelen was delayed over criticism that its broad mission of defending human rights risked “obfuscation as to the scale of the Shoah and banalization,” according to Eli Ringer of the Flemish Forum of Jewish Organizations.

In neighboring Holland, the remembrance of German soldiers along with their Jewish and non-Jewish victims during memorial ceremonies for World War II victims led to acrimonious debates and legal action. In May 2012, a Dutch court, responding to a petition filed by a Jewish group, issued an injunction against the commemoration of German soldiers in the town of Vorden.

“Commemoration needs to draw lessons or it’s a sterile affair,” said Joel Rubinfeld, co-chair of the Brussels-based European Jewish Parliament and past president of Belgium’s main Jewish umbrella group. “There are lessons to be drawn from Jewish emigration from Europe, and presenting them as part of a larger population shift doesn’t help in a time when anti-Semitism is once more driving some Jews out of Europe.“

“No one died in my family in the Holocaust,” she said. “If not for Red Star Line, we might be in a different museum right now—a museum for Holocaust victims.”