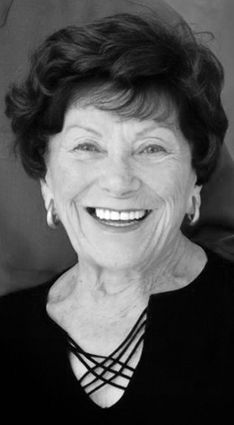 "A mold breaker, a cause fighter, the underdog supporter, like a true queen of Israel, and a woman who accepts all people"-these are all descriptions from friends of Rita Peisner Bornstein, who died peacefully, surrounded by her loving family and friends, on Nov. 18, 2013.

Born April 19, 1925, she was the daughter of Ed and Jenny Peisner, and sister of Marvin, Larry and Fred Peisner.

Mrs. Bornstein earned her master's degree in English at the University of Chicago, where she also happened to meet her future husband, Jerome (Jerry) Bornstein.

Rita was also actively involved in the creation of the Hebrew Day School. She and Tess Wise hosted the first fundraiser for the school, and Rita and her committee developed the curriculum for Hebrew High, where she taught eighth-graders comparative religion.

She served on the Jewish Community Council and the Federation boards, and was a permanent HDS board member. Tirelessly, Rita taught Jewish education at Temple Israel, literature at Elder Hostel and ran book clubs with members who enjoyed her classes for many years.

Rita was a founder of Head Start in Orlando, and with the same concern as Jerry about racial integration in schools, she organized and implement Wider Horizons in the late 60s and early 70s. This program helped disadvantaged children integrate more smoothly into their local schools.

In 2009, the Jewish Pavilion honored Rita Bornstein for her life of community service.

At that time, Sheryl Meitin, then president of the Pavilion, said, "Rita is a true community activist and philanthropist. She is loved by everyone she meets and is respected for her intellect and wit."

"Rita devoted her life to her family, friends, community and tikkun olam. Even when she and Jerry lost a son, she did not let sadness and the loss stop her life. She kept on doing everything she had always done with style and grace," her cousin, Ellen Bornstein Hrabovsky, said.

When Rita was honored by the Pavilion, Rabbi Aaron Rubinger of Congregation Ohev Shalom had this to say: "To me, Rita Bornstein represents the ideal modern Jewish woman. First of all she is deeply educated, extremely intelligent and has a profound love of learning. She is also an individual of true integrity and character. Her heart is wide and thus she cares about so many important causes and issues in our world and in our community. Her faith I know is deep, yet she is hardly a fanatic. Rita listens, thinks, and considers what all people have to say. She posseses such extraordinary dignity, like a true queen of Israel. And can you imagine a more beautiful smile than hers?"

In memory of Mrs. Bornstein, the family requests that contributions be made to Congregation Ohev Shalom Hebrew School Scholarship Fund.