In typhoon-ravaged Philippines, Israel brings its experience in disaster relief 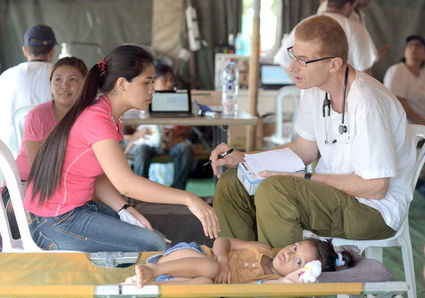 (JTA)-Obviously wanting to get back to work as the medical manager of the field hospital set up by the Israel Defense Forces in the Philippines, Lt.-Col. Dr. Ofer Merin speaks hurriedly about the three days his team has been seeing patients in the typhoon-ravaged nation.

He tells of at least 12 babies the hospital has delivered-most of them premature-and the stabbing victim who may have died if not for the IDF hospital in Bogo City on Cebu Island, one of the areas hardest hit by last week's Typhoon Haiyan.

By 5 a.m. Sunday, Merin says at least 50 people had lined up in front of the field hospital to receive treatment.

"If we stayed here two months or even two years we would have patient work," he said during a phone call with the media from the Philippines early Sunday morning.

The field hospital began operating on Friday morning, about seven hours after the team arrived on the island. The parents of the first baby delivered by the Israeli team that first morning named him Israel in gratitude to the volunteers.

Established adjacent to the local hospital in Bogo City, the Israeli field hospital is the only one located in a region of about 250,000 residents, Merin says. Representatives of other countries have visited to view its operation.

The 125-member Israeli team has been seeing about 300 patients a day who were either injured in the typhoon or unable to care for chronic conditions such as heart disease or diabetes due to lack of running water or electricity. Others with untreated diseases, including those with advanced cancer, also have made their way to the facility.

Some 22 members of the team are medical doctors, 15 are nurses and the rest are technicians, lab workers and members of the Homefront Command who are coordinating logistics. The delegation brought 100 tons of equipment and supplies.

Merin says the local officials and residents, as well as the medical staff of the local hospital, "greeted us warmly."

"We are working hand in hand with the Filipino people," he said.

Merin, a cardiac surgeon and deputy director of Shaare Tzedek Hospital in Jerusalem, says the Israelis also have performed surgeries in the local hospital in concert with local doctors "to give them some of our knowledge."

Despite the death toll of more than 3,000, which is expected to climb thousands higher, and the nearly 2 million displaced, Merin says the wounded are not wandering the streets like he saw in Haiti following the 2010 earthquake. He also was part of the Israeli team that traveled to Japan in the aftermath of its 2011 tsunami; the Japanese infrastructure was better able to withstand a disaster, Merin said.

At about 4 a.m. Sunday, a man who had been stabbed in the chest was brought to the Bogo City field hospital by friends. Doctors put in a chest drain, which Merin says was beyond the capabilities of the local hospital.

"I am not sure what would have happened if we had not been around," he said.

Mobilizing and operating the field hospital has cost Israel millions of dollars,  Merin says, as well as lost manpower. The medicines and much of the equipment brought in will remain when they leave in about two weeks, he adds.

Merin, who is volunteering, believes the IDF is able to mobilize so quickly in the wake of natural disasters because it operates as an army unit, sending an advance team that allows the unit to deploy quickly upon arrival.

One of the logistics officers left with the team for the Philippines two days after his wedding, despite being on leave from the army for the occasion.

Israelis, Merin says, are "ready to drop everything and come and assist anywhere in the world that we need to be."

His team in the Philippines, he adds, is "really treating [the patients] with all their heart."