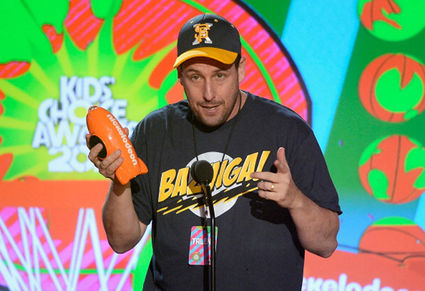 HOLLYWOOD, Fla. (JTA)-Adam Sandler is a Jewish comic actor with a serious streak. Dustin Hoffman is a serious Jewish actor who can be pretty freakin' funny.

Put them both together and what do you get? "The Cobbler," a comedy starring Sandler and, according to The Wrap, now Hoffman, too. No word on Hoffman's role, but Sandler will play a shoe repairman who has powers that allow him to step into the lives of the people whose footwear he repairs.

Steve Buscemi also just scored a part in the film, joining already committed Method Man and "Downton Abbey" star Dan Stevens. Tom McCarthy, the man behind indies such as "The Station Agent" and "The Visitor," is set to direct.

Details of the plot are being kept secret, but it sounds potentially Jewish, no?

Maybe it's some kind of Old World period piece? Well, Method Man probably wouldn't fit into that equation, but perhaps Sandler is a Bukharan Jew with a storefront in Williamsburg? That could work.

Mazel tov to Jerry and Jessica Seinfeld on the bat mitzvah this weekend of their daughter, Sascha.

Of course, a congrats from the likes of us is sad and meaningless in comparison to well wishes from the king of mazel himself, Andy Cohen, who looked absolutely giddy (and squinty) in a party pic posted to Instagram by proud mom Jessica. The Bravo powerhouse was pictured alongside George Stephanopoulos, Jerry and the Seinfelds' son, Shepherd.

1. She has inherited at least some of her dad's sense of humor. A photo posted last week shows Sascha guzzling a bottle of (virgin) apple cider. The caption: "Gettin' faded, pre-bat mitzvah."

2. Sascha turned 13 a couple of weeks before the big event, as documented in this adorable, bespectacled shot of her blowing out the candles on her cake. Can she rock nerd glasses or what?

What we really want to know, though, is who was invited up for the candle-lighting ceremony? What were the party favors? And did Julia Louis-Dreyfus show up and do the Elaine dance?

Music mogul Simon Cowell is thinking of joining the tribe, the Mirror reported on Thursday.

The "X Factor" judge, who has a Jewish father but was raised Roman Catholic, has been inspired by his Jewish soon-to-be baby mama (and maybe soon-to-be wife) Lauren Silverman. She is expecting their first child in February.

Looks like Cowell is taking the whole thing quite seriously, having planned a "secret" trip to Israel because he wants to make a "more informed decision" before he commits to the faith, a source told the British tabloid.

Cowell also recently made a $150,000 donation to the Friends of the Israel Defense Forces at a fundraiser in Beverly Hills, and is possibly considering taking up traditional Israeli dance lessons in preparation for his wedding.

Signing off now to work on our pitch about a reality show featuring Cowell's on-screen conversion, during which he is judged by a panel of bombastic rabbis.

In what will hopefully be a blissful mawage, Disney has announced plans to work with William Goldman on a theatrical production based on his book "The Princess Bride" and screenplay for Rob Reiner's 1987 classic film "Princess Bride."

It's not the first time an attempt has been made to bring the story to the stage. Goldman teamed up with other theater people several years ago, but per The Hollywood Reporter, although "much of the score was completed, development was halted in 2007 over a financial dispute."

Somehow we have faith that Disney can make this thing finally happen. If not, we know a certain six-fingered man who might be able to give them a push.

At 109, Alice Herz-Sommer is the world's oldest Holocaust survivor, the world's oldest pianist and the second-oldest person living in England. She's also the subject of the documentary "The Lady in Number 6: Music Saved My Life," now up for a possible Academy Award nomination.

The film was listed among the eight on the academy's shortlist from a field of 40.

Herz-Sommer's story is extraordinary and judging from this trailer, so is the film.

She will have to wait until final nominations are announced in January to find out if the film is in running for an Oscar, but you can help bring her some more immediate gratification by joining in the filmmakers' campaign to garner 110,000 birthday wishes for her 110th birthday on Nov. 26. They've made a website for participants.

Julio Iglesias says he's "jewish from the waist up"

Latin love machine Julio Iglesias recently dished to The Jerusalem Post that he is Jewish "from the waist up."

The 70-year-old singer is not, in fact, some kind of Semitic centaur; he just skipped a certain traditional rite of passage. (Oh, you got that right away? Sorry, took us a minute to process. Actually, we're still processing.)

"I've known my whole life about my family's Jewish past, there were lots of conversations in my house about the Inquisition and about Sephardim," said Iglesias, a Madrid native. "My mother's name-de la Cueva y Perignat-was a very Jewish name."

This might explain his frequent visits to Israel. Following his performances there in 2009 and 2011, he played Israel again over the summer and has a Tel Aviv concert booked for Nov. 24.

"The world understands that Jews are a race that use their customs and character to make the world a better place," Iglesias said. "And when I'm in Israel, I see something completely unique taking place. I see a very strong Jewish country and I see Spanish Jews, Russians, Argentinians all with one motivation-to keep Israel safe. And that touches my heart."

Doesn't a series about an FBI agent who, while investigating a murder in Jerusalem, stumbles upon a conspiracy intertwined with the ancient city's history sound sort of awesome? Well, good news: American TV bigwigs think so, too.

"Dig," penned by Gideon Raff, the Israeli writer behind "Homeland" and its Israeli counterpart "Prisoners of War," has been picked up by Universal Cable Productions for the USA Network.

Per the The Times of Israel: "Israeli TV shows have, for several years, been finding success on small screens overseas, but the six-episode deal struck by "Dig" creators marks the first time a U.S. network has committed to an entire series of an Israeli-produced show without buying a pilot first."

Even more impressive, "Dig" won't be shot somewhere like Malta, a la "World War Z." The series, co-written by "Heroes" writer Tim Kring, will be filmed on location in Jerusalem.

In a news release, Jerusalem Mayor Nir Barkat wrote, "When we combine Hollywood's creative potential with Jerusalem's historic backdrop, it will result in the ability to connect hundreds of millions of viewers around the world to this unique and beautiful city."

Nobody puts Andy Cohen in a corner! And by "corner," we mean the corporate offices of Bravo.

The "Watch What Happens Live" host had made a two-year deal with the network in which he will relinquish his position as executive vice president for talent and development, allowing him to spend more time focusing on his popular show, The New York Times reports.

Cohen will stay on as an executive producer on the "Real Housewives" franchise, and via his new production company, Most Talkative, he will continue to create programming for Bravo.

"This is sort of freeing Andy from the corporate shackles," Bravo President Frances Berwick said.

In other words, we can all now rest assured that the man who brought us "Fashion Queens," "Shahs of Sunset" and, presumably, "Princesses: Long Island,"will not be stuck in the board room when he could be generating more cultural contributions and then subsequently deconstructing the contributions on "WWHL."

Somebody deserves a Mazel of the Week, we think.