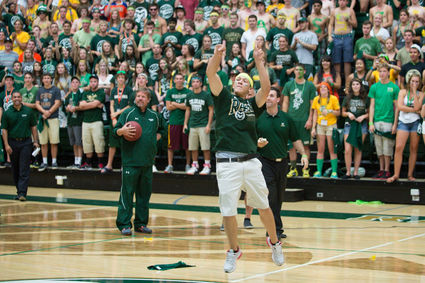 BALTIMORE (JTA)-The basketball goal that Ellen Schneeweis bought for her four sons as a Chanukah present in 2008 drew Andrew, the second oldest, to practice shot after shot.

Some attempts came from a pretty fair distance-like the sidewalk in front of his neighbors' house in Englewood, Colo., on the other side of East Berry Drive.

His diligence paid off: On Aug. 24, Andrew Schneeweis, now 18, swished a half-court shot at Colorado State University's Moby Arena to earn a free year of tuition.

The reward for constant practice was well needed. Money has been tight, Ellen Schneeweis said in an interview, since she and the boys' dad divorced five years ago. Between bar mitzvah savings and student loans, they had somehow cobbled together some of the funds for college.

"I really don't know how," Ellen told Andrew as they ate lunch after her son had settled in at his dormitory in August.

She recalled, "I told him not to think about the loans, to just enjoy the four years-take any class, meet new people."

While room, board, books and other expenses-a total Andrew estimated at $14,000-aren't covered by the contest-winning shot, Ellen Schneeweis says she's plenty grateful for what the family will be receiving.

"It's like money that came from the sky. It feels like God sent it," she said. "I feel that things happen for a reason. It's going to make the ride a little easier for us."

For Andrew Schneeweis, the journey to improved fortune began at a freshman pep rally with some 5,000 incoming students. He had been reveling in the evening's charged atmosphere, with the pep band playing and the men's basketball team warming up.

Schneeweis was chosen at random for the three chances to sink the long-distance attempt at the tuition prize.

The public address announcer for the evening-Ryun Williams, coach of the women's basketball team-revealed the seat number of the lucky shooter. It had been chosen hours earlier, before any of the students had entered the gym.

"There was so much excitement, and I knew I had a chance to make it," he said. "I ran down to the court, and I really don't remember much. I just remember looking at the hoop, they handed me the ball and I thought, 'Hmmm, let's make this happen.'"

Wearing a green university T-shirt and a yellow bandana, the slightly built Schneeweis pumped his hands to pump up the crowd, turned around, dribbled twice and from the ram logo at midcourt, heaved the ball from behind his right shoulder toward a side basket. He took a stutter step in the manner of a shot putter watching the sphere's flight.

Schneeweis considered his attempt near-perfect. It went far and stayed straight. But, he wondered, would the ball clear the front rim?

It did, prompting a deafening roar. The school's mascot and several students who rushed the court hugged Schneeweis. So did men's basketball coach Larry Eustachy, who was on the hook for a portion of the $7,500 prize.

Morris said Sunday that he'd made the sponsorship suggestion "half-kiddingly."

"It's easy for me to say because it's not my money," he said.

Morris said the shot and ensuing pandemonium were "icing on the cake for an evening that was already a lot of fun."

A video of the prize-winning shot went viral on YouTube, and ESPN included it among the day's top 10 highlights.

Within two weeks, the coaches wrote out their checks to cover the in-state tuition costs.

Just a week before the tuition win, Schneeweis sank a half-court shot at a rec center near the family home, now in the Denver suburb of Greenwood Village. Did that success provide the boost in confidence that helped Schneeweis replicate the feat before thousands of screaming fans with so much on the line?

"It's possible. Practice always helps. It could have paid off," he said. "I'd have thought I'd be nervous in front of [thousands of] people. But I was... calm as ever."