Survivors in Israel say gov't must do more 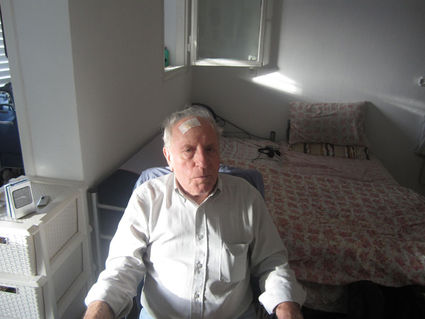 Ben Sales Dov Jakobovitz, 85, lives in an old-age home in a poor neighborhood of Tel Aviv. He survived Auschwitz and fought in two Israeli wars, but now he doesn't have enough money for food.

TEL AVIV (JTA)-Breakfast costs Dov Jakobovitz $2. Lunch costs him $2.25. Both are served in the public old-age home in south Tel Aviv where he lives. But the food is not to his liking.

Jakobovitz longs for the dishes he ate as a child in Transylvania-gefilte fish, goulash, chicken wings-rather than the rice-and-salad fare more typical of the Israeli diet. A restaurant he enjoys in the center of the city serves such Ashkenazi fare, but he can't afford it. For dinner, he eats leftovers from lunch.

But Jakobovitz knows it could be worse. Born in the Romanian town of Satmar in 1928, Jakobovitz was deported with his family to Auschwitz at age 14. The memory of watching his mother sent to the left in the selection line, to the gas chambers, still haunts him.

"In the concentration camp, we ate the shavings of carrots and vegetables," he recalls. "We had wooden shoes. We ate from our hands, from our hat. We'd be satisfied with enough to eat from that. That was in Auschwitz."

Jakobovitz made it to prestate Israel in 1947 and was immediately drafted into the Haganah, the Zionist military organization. He fought in Israel's 1948 War of Independence and in the 1967 Six-Day War. Today he can't meet basic monthly expenses.

He receives $1,200 every three months in reparations from the German government and another $120 per month from Israel, but it's not enough. Jakobovitz skimps on buying medicine to save money. He doesn't buy new clothes, and purchases only the cheapest shoes-they hurt his feet. Only rarely does he splurge on organized day trips for the elderly.

And he's not alone.

A report this year by the Foundation for the Benefit of Holocaust Victims in Israel found that a majority of Israel's 192,000 survivors are struggling economically. Another 40 percent report feeling "very lonely." Two-thirds are unsatisfied with government assistance for survivors. And 92 percent feel the government doesn't invest enough in their welfare.

"There are still gaps between the response and what's needed," said Roni Klinsky, the foundation's CEO. In the past, "people got less help and weren't organized enough to get assistance. The state always has troubles. There are wars and new immigrants. But the survivor issue wasn't a high priority."

The issues are pressing now, Klinsky says, because of the dwindling number of survivors-it's the last chance to make a substantive difference for many of them. An estimated 37 survivors die every day in Israel, a rate that within five years would nearly halve the survivor population to just over 110,000.

In the state's first decades, some Israelis reacted to survivors with ambivalence, deriding them as passive and weak. The Dorner Report, a 2008 government study on public assistance to survivors, charged that "as they built, developed and defended the land... successive governments of Israel neglected the right of survivors to personal reparations."

Klinsky says attitudes have changed and Israelis now respect the resiliency of Holocaust survivors. The government also has dedicated $1 billion in additional funding to survivors over the past four years. Recently elected Finance Minister Yair Lapid, who often references his father's Holocaust experience, has added about $28 million in aid to survivors annually over the next five years.

"The State of Israel is trying to aid them to not only die with respect, but to live with respect," said Menachem Wagshel, the Social Welfare and Social Services Ministry's coordinator for Holocaust survivors. "We need to look at the coming years as critical, when we can still assist them to give them the best care."

Among the challenges facing the government in meeting that commitment is defining just who qualifies as a Holocaust survivor. Following the Dorner Report, the government expanded its definition to include those who escaped or performed forced labor, doubling the number of recognized survivors. Klinsky and Wagshel are now formulating for the first time a unified list of Israeli survivors that they hope to finish within two years.

Wagshel also is creating a government office that will handle all survivor concerns, consolidating a sprawling apparatus.

One potential beneficiary of all that is Ruth Eizenberg, who escaped from Kiev to the Ural Mountains as a child, arriving in Israel in 1972. Eizenberg, 79, has asthma and trouble walking. She lives in a fifth-floor walkup in Jerusalem. A government-funded caretaker who visited her twice weekly was dismissed recently because, Eizenberg said, a nurse misjudged her ability to live unassisted. Eizenberg is requesting the caretaker's return, but thus far without success.

Eizenberg's most reliable help comes from Yedida Freilich, 25, a student who visits once a week as part of Adopt-a-Safta, a volunteer program founded last year to provide company for lonely survivors. During her last visit, Freilich helped Eizenberg acquire a cane from Yad Sarah, a nonprofit that aids the disabled and elderly.

"When you know you're seeing the same person on the same day at the same hour, it gives structure to a life that is otherwise inactive," said Jay Schultz, Adopt-a-Safta's founder.

Another new initiative to address survivor loneliness is a community center founded two years ago in a bomb shelter in central Jerusalem. In newly renovated rooms, the center hosts holiday celebrations, lectures and activities for 120 regular attendees.

Jakobovitz frequents a similar center in Tel Aviv. The programming is nice, he says, but the government needs to take more responsibility.

"I want to rest," he said. "I don't have a lot of demands. I'd like to live a little better, to go into a store and buy a shirt or shoes that are comfortable. I know this is my last stop and I'm too old to want. I don't need money to spend, just to live."