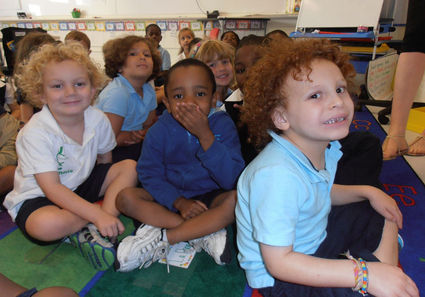 A group of kindergartners, representing such an even mix of black and white children that they resemble a 1980s Benetton ad, clasp each other by the waist and dance in a "rakevet," or train, stopping every few moments to add a new child who, as the teachers explain in Hebrew, is sitting nicely on his or her "tussik."

In another room of the new institution, located in a former Catholic school on a gentrifying block in Harlem, first-graders place red and yellow chips on Bingo cards, each space designating a colored item of clothing to be identified in Hebrew. Children who lapse into English receive a gentle reproof from the teacher saying in Hebrew, "I hear English. Oy va voy!"

But while students at Harlem Hebrew were basking in the good vibes, its sister school, the 4-year-old Hebrew Language Charter School in Brooklyn, was dealing with the F it received a day earlier in the New York Department of Education's annual grading of city schools.

Despite the Brooklyn school being named a "vanguard" school by the Hebrew Charter School Center, the national network with which both New York schools affiliate, leaders of the center say the poor showing doesn't reflect on the quality of the Brooklyn school or on Hebrew charter schools generally.

"It's in no way a setback for the movement," said Rabbi David Gedzelman, a board member of both the Harlem school and the Hebrew Charter School Center and the executive vice president of the Steinhardt Foundation for Jewish Life, one of the center's primary funders.

The F grade is an unusually poor showing for a Hebrew charter school, the bulk of which have done well on state evaluations. Three of the four schools in the Ben Gamla network in Florida earned A's in 2013 from the state ranking system, which is based on test performance and other factors. The fourth got a C.

The only other center school besides Brooklyn to be tested so far-the Hatikvah International Charter School in East Brunswick, N.J.-ranked in the 99th percentile of a statewide evaluation of academic achievement.

Launched in 2009, the Brooklyn academy was the first school founded with financial and technical assistance from the center. By some measures, the Hebrew Language Academy has been a success. Its profile on InsideSchools.org, an online guide to New York public schools, is filled with enthusiastic parent testimonials. In recent years, the school has received more applications than it has openings.

Still, the academy was one of only 23 elementary schools in the city to receive an overall grade of F for 2012-13. The annual assessment is based largely on student progress in statewide math and English tests.

As 2012-13 was only the second year that its students took the tests, much of the academy's overall grade was determined by the performance of its first cohort: 75 students who were fourth-graders last year.

These students-some entered as first-graders in its opening year and others matriculated there as late as the second or third grade-have a different demographic profile than the rest of the school and the schools with which the academy was compared, charter school center officials say.

Gedzelman said the Brooklyn school is improving, and he noted that its third-graders performed considerably better on average in 2012-13 than the fourth-graders.

Over the years, the academy has offered more academic intervention and support for low-performing students. It is also adding a summer program.

The other schools in the charter school network-including Harlem Hebrew and two others that opened this fall in San Diego and Washington, D.C.-have benefited from lessons learned by the Hebrew Language Academy over the years, Gedzelman said.

For example, Harlem Hebrew launched this year with a reading specialist and English-as-a-second-language specialist on staff, something the Brooklyn academy did not add until later.

Another center-affiliated school is slated to open this year in Los Angeles. The group also is in discussions with planning groups in Philadelphia and Chicago, and is considering opening additional schools in New York City.

So now we have another piece of evidence that 'Human Biological Diversity' is ==real== (google on that phrase, & explore). Which will not, of course, stop the head-in-the-sand ideologues from denying it. The Hebrew ethnic people ==can== choose which flavor of allies they want to spend time and money cultivating. It is abundantly clear from MANY objective evidences that the future belongs to East Asia; it is puzzling to witness the preference for moving closer to evolution's losers....