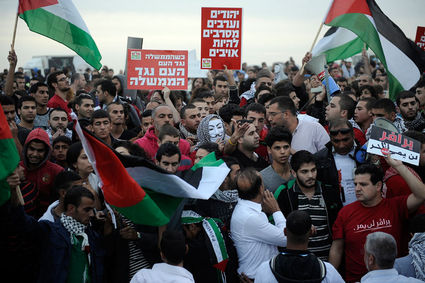 Demonstrators gathered on Nov. 30, 2013 in the southern Israeli town of Hura to protest against the Israeli government's plan to resettle some 30,000 Bedouin residents of the Negev desert. The demonstrations were organized as part of an International Day of Rage against the Prawer-Begin Plan.

JERUSALEM (JTA)-At least 28 protesters were arrested and 15 police officers injured during protests over a plan to resettle Bedouin into permanent communities in southern Israel.

The thousands of protesters in the Negev Desert, Haifa, eastern Jerusalem and the Arab-Israel community of Taibe threw rocks at police forces and blocked roads as part of a so-called Day of Rage against the plan.

Police used water cannons, tear gas and sound grenades to disperse the demonstrators, according to The New York Times.

"We will treat offenders to the fullest extent of the law and will not tolerate such disturbances," Prime Minister Benjamin Netanyahu said Saturday night after the demonstrations were quelled. "We have -and will have- no tolerance for those who break the law. Attempts by a loud and violent minority to deny a better future to a large and broad population are grave."

The Bill on the Arrangement of Bedouin Settlement in the Negev would compensate Bedouin for land claims and relocate 30,000 Bedouin to recognized communities in the Negev. It passed its first reading in the Knesset in June by a vote of 43-40. The bill is expected to come up for its second and third readings during the current winter session of the Knesset.

Also known as the Prawer Bill or the Prawer-Begin outline because of the work on the bill by former lawmaker Benny Begin, the legislation also would enable the recognition of unrecognized Bedouin villages, but only within certain designated areas that include plans for infrastructure. Other unrecognized villages would be razed.

According to the bill, "the development of the Negev, for the benefit of all of its residents, is a national task of the highest order. In order to realize this national goal to its fullest, the issue of the Bedouin settlement in Negev must first be regularized."

About 200,000 Bedouin, who are Israeli citizens, live in the Negev.