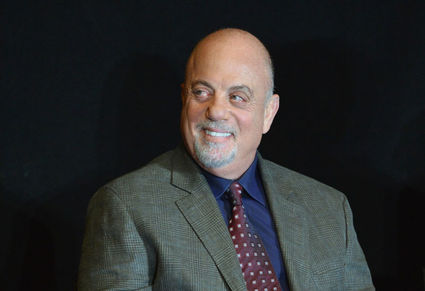 HOLLYWOOD, Fla. (JTA)-Can't get enough Billy Joel? You're in luck-at least if you live in the New York area and have a hefty concert ticket budget.

Beginning in January, the legendary singer will be playing a monthly show at Madison Square Garden. The monthly gigs will continue for "as long as the audience demands," said Joel, who will be performing on his 65th birthday, May 9.

That could be awhile-at least the first four dates already are sold out.

"Having [Joel] as your musical franchise is like having the pope as your parish priest," said the Garden's executive chairman, Jim Dolan, according to the Daily News.

As Joel is Jewish, so maybe it would be more like having the chief rabbinate of Israel working your local congregation? Maybe not.

In defense of Hitler, by Tila Tequila

If your memory of C-list phenomenon Tila Tequila is hazy at best, the former star of the MTV reality show "A Shot at Love with Tila Tequila" and, natch, a sex tape, is out to change that. Or, more likely, she's simply gone off the deep end of a pool nestled deep within the borders of Crazytown.

As reported by Tablet, Tequila posted to Facebook a shot of herself decked out in a sexy Nazi costume, standing against the picturesque backdrop of a photo of Auschwitz. A shocking and bizarre creative choice in general, but even more so from someone who at about this time last year was talking about becoming a Jew. Not an Orthodox Jew, of course, because that would be, in the words of someone who refers to herself as Hitila (get it, Hitler plus Tila? You just smush those two names together and you get Hitila) "too hardcore."

While the photo has since been taken down, a blog post intended to bust all those terrible Hitler myths remains out there for the world to consume. In "Why I Sympathize with Hitler Part 1: True History Unveiled," Tequila attempts to set things straight:

"Here is a man who was not a coward, stood up for his country in a desperate time of need (unlike all of our cowardly leaders), and yet not only did he try his best to help his country and people get out of what was a time of depression, economic collapse, high unemployment, amongst many other things... he lost the war AND was painted out to be a monster after his death."

Not that she has anything against the people belonging to the tribe she may or may not have converted to.

"I am not going to sit here and say that I hate Jewish people because that is not the case nor is this about Jews," Tequila clarifies. "It is about Hitler and his side of the story that was never told since he was not the victor. However, those of you with a closed mind can think I am being anti-Semite all you want because I already told you that I am not, nor will I repeat myself again."

Funny because just last week, alongside a link to a report about the death of reality TV director James Marcus Howe, she shared this gentle and not at all anti-Semitic sentiment: "GOD SEE'S YOU DIRTY F***ING KIKES WORKING FOR THE SYNAGOGUE OF SATAN AND I HAVE RETURNED AS HIS MESSENGER! TAKE HEED NOW BITCHES!"

As the story unfolds, we hope to find answers to many important questions, such as whether Tequila is dressed in last year's Purim costume, if she high-fived herself in the mirror when she came up with her genius name hybrid, and if the Singapore-born sorta star has ever wondered how the Fuehrer would have felt about her non Aryan-ness.

Israeli-born actress Gal Gadot has been cast as Wonder Woman in the upcoming film "Batman vs. Superman." Speculation over whether Diana Prince would even appear in the "Man of Steel" sequel in the first place (rumors of a Wonder Woman vehicle have been floating around for about a decade now) has been replaced by speculation over whether Gadot, 28, is worthy of playing the super-powered feminist icon.

We think yes. Badass credentials include a role in the "Fast & Furious" franchise, a stint in the Israeli army and the Miss Israel crown. OK, so the last one might not sound all that tough, but it did provide her with some tiara-wearing practice.

"Wonder Woman is arguably one of the most powerful female characters of all time and a fan favorite in the DC Universe," director Zack Snyder said. "Not only is Gal an amazing actress, but she also has that magical quality that makes her perfect for the role. We look forward to audiences discovering Gal in the first feature film incarnation of this beloved character."

Gadot will star alongside Ben Affleck as Batman and Henry Cavill reprising his role as Superman.

Paul Rudd hosted "Saturday Night Live" this week, but he wasn't the only Jewish cutie to make an appearance on the episode. Also present was Jacob the Bar Mitzvah Boy, a favorite of "Weekend Update" anchor Seth Meyers and the son of his podiatrist.

This time the socially awkward, notes-fixated Jacob was at the desk to talk about Chanukah. We learn, speech-style, about the game of dreidel, Jacob's cousin's peanut allergy, and that the holiday has eight days-coincidentally the length of time his brother Ethan was grounded for calling his social studies teacher a fascist. Good stuff, although it's no Xbox 360!