Anne Frank had a stepsister! 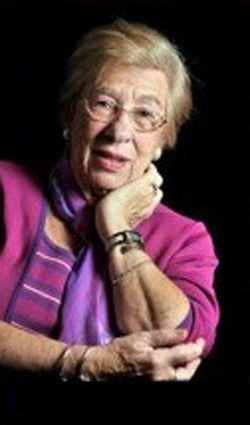 Here is a special opportunity to hear a first-hand account from someone whose life intersected with one of the most compelling figures in recent history. On Feb. 9, 2014, Chabad of Orlando will host an evening with Holocaust survivor Eva Schloss, who will share her experiences as the childhood friend and stepsister of Anne Frank, including accounts of the publishing of Anne's famed diary. The presentation will be suitable for teenagers and families of all faiths.

In 1938, Germany invaded Austria, causing many Jewish families to flee Austria to avoid persecution. Among the emigrants was 8-year-old Eva Geiringer, who with her mother, brother, and father moved first to Belgium and then to Holland, where one of her neighbors was a German Jewish girl of the same age. Her name was Anne Frank.

The two girls became friends and playmates. They passed the time by skipping, playing hopscotch and marbles, and drinking lemonade that the Anne's mother prepared.

Ultimately, both girls and their families were deported to the Auschwitz concentration camp.

Eva's father and brother did not survive the ordeal, nor did Anne Frank, but she and her mother were freed in 1945 by Russian troops. They returned to Amsterdam, where Eva continued her schooling and then studied art history at the University of Amsterdam. She moved to England, where she married Zvi Schloss and raised three daughters. She worked as a studio photographer and ran an antique shop.

Since 1985, Eva Schloss has devoted herself to holocaust education and global peace. She has recounted her wartime experiences in more than 1,000 speaking engagements. She has written two books and has had a play written about her life. In 1999 Eva signed the Anne Frank Peace Declaration along with United Nations Secretary General Kofi Annan and the niece of Raul Wallenberg, a legendary figure who rescued thousands of Jews in Budapest.

Schloss' story is sensational and difficult to imagine, yet her insightful message confirms that life is precious and fragile, that the creative spirit is stronger than fear, that the power of good is immeasurable, and that love makes a difference.

The cost is $20 per person before Jan. 31; $28 Feb. 1 and after. Sponsor tickets are $360, which entitles purchaser to two VIP tickets, VIP private cocktails with Schloss and a signed copy of her book.