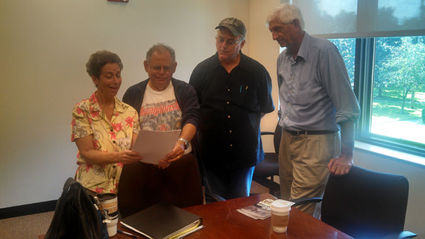 The St. Augustine Jewish Historical Society has been awarded a Florida Humanities Council Grant in support of a two-day commemoration marking the 50th anniversary of the largest mass arrest of rabbis in United States history.  The arrests took place during protest demonstrations that ultimately led to the passage of the 1964 Civil Rights Act.  The rabbis came to St. Augustine after receiving a request from Reverend Martin Luther King.

Since 1971 the Florida Humanities Council has awarded more than $8 million statewide in support of the creation of humanities resources and the presentation of public programs. These programs and resources help preserve Florida's rich cultural heritage, promote civic engagement, and foster connections among humanities scholars, cultural organizations, and community groups. All awarded funds are provided by the Florida Humanities Council through a grant from the National Endowment for the Humanities (NEH).

By awarding this grant, the Florida Humanities Council recognizes the value of the Historical Society and its ability to provide public humanities programs and cultural resources on Florida's First Coast. The St. Augustine Jewish Historical Society has been cited as part of a matrix of resources dedicated to building strong communities and informed citizens by providing Floridians with an opportunity to explore their heritage, traditions and stories.

The excitement of Society leadership has been increased with the responses from more than half of the Rabbis still alive who look forward to participating in the commemoration.  They all are looking forward to recreating the protests of 50 years ago with visits to St. Paul's AME Church from whose pulpit Reverend King preached before sending them out to what is now the Bayfront Hilton Garden Inn to integrate a lunch counter and include a visit to the St. Johns County Jail where they were incarcerated.