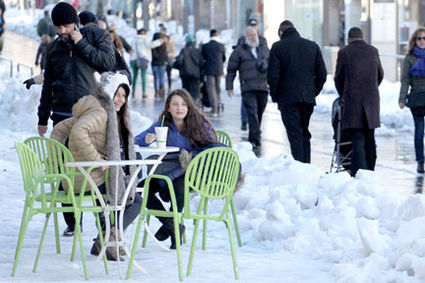 Jerusalem and its environs were blanketed with snow, causing access routes to Jerusalem, including Highway 1, to be blocked for part of the day as municipal crews worked to clear the roads in the city; school was canceled for the day. Shown here are young people sitting at a cafe table set up amid the snow on Jerusalem's Jaffa Road on Dec. 15.

Some two feet of snow fell on Mount Hermon in Israel's north. Roads were closed due to flooding in the Negev Desert in the south.

Syria and Lebanon also were hit with large amounts of snow.