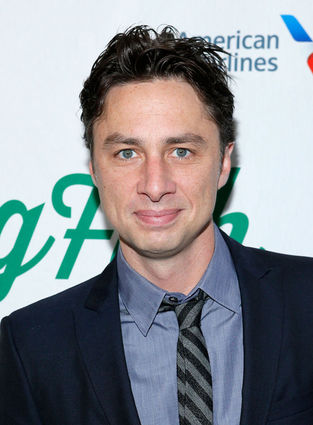 HOLLYWOOD, Fla. (JTA)-It seems like just yesterday that folks were ripping high-earning "Scrubs" star Zach Braff for taking money from regular people via Kickstarter to fund "Wish I Was Here," his follow-up to "Garden State."

Now the film is done and set to premiere in Park City, Utah, at the Sundance Film Festival in January, USA Today reports.

In addition to directing and co-writing the project, Braff also has a starring role alongside Kate Hudson, Mandy Patinkin, Josh Gad, Ashley Greene and Joey King. In other words, enough Jews to warrant an impromptu on-set Rosh Hashanah celebration.

"Wish I Was Here" is not in competition at the festival, but we're definitely looking forward to seeing what kind of reaction it gets. Hopefully his investors won't be disappointed.

"Mr. Goldstein did not invent the dirty magazine," the Times obituary states, "but he was the first to present it to a wide audience without the slightest pretense of classiness or subtlety. Sex as depicted in Screw was seldom pretty, romantic or even particularly sexy. It was, primarily, a business, with consumers and suppliers like any other."

If you're not familiar with his over-the-topness, this from the Times about sums it up:

"Apart from Screw, Mr. Goldstein's most notorious creation was Al Goldstein himself, a cartoonishly vituperative amalgam of borscht belt comic, free-range social critic and sex-obsessed loser who seemed to embody a moment in New York City's cultural history: the sleaze and decay of Times Square in the 1960s and '70s."

The piece goes on to detail Goldstein's path to-as well as influence on-the sex industry, the rise and fall of his mini empire, and his eventual descent into poverty and poor health.

The latest (and only?) Jewish royal has arrived, care of Charlotte Casiraghi and Gad Elmaleh. Their son, Raphael, was born last week.

In case you're not up on European celeb culture, Casiraghi is the daughter of Princess Caroline of Monaco (and therefore the granddaughter of the late Grace Kelly) and Elmaleh is the Jewish, Moroccan-born actor and comedian who has been called the "Jerry Seinfeld of France." The two became engaged this summer.

Paul Rudd has won what may have been the first head-to-head competition between two boyishly handsome Jewish stars for the role of a superhero.

The Wrap reports that Rudd will play Henry Pym in Marvel's "Ant-Man," instead of their first choice, Joseph Gordon-Levitt, who passed in order to commit to another comic book adaptation, the WB's "Sandman."

Some may doubt the "Anchorman 2" star's ability to pull it off, but we have faith. Rudd's a funny guy with great comic timing-something that seems necessary for a film about a guy whose power is becoming teeny.

It hasn't been announced which role Gad will play, but for some reason we have him pegged as a certain bumbling, floppy-hat-wearing seaman. Gad also co-wrote the script.

Finally, though, the two are back together. In "Blended," Sandler and Barrymore play a couple who, after an epically bad first date, end up together in a family resort with their kids from previous marriages.