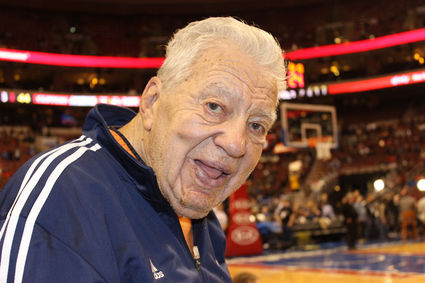 Hillel Kuttler A self-proclaimed "one of a kind," Harvey Pollack at 91 continues to work courtside at Philadelphia 76ers home games.

PHILADELPHIA (JTA)-Fittingly, Harvey Pollack was the one who scribbled the number 100 on the most famous photograph in basketball history: Wilt Chamberlain holding the piece of paper signifying his astounding point total in a 1962 game for the then Philadelphia Warriors.

After all, Pollack is basketball's ultimate numbers and public relations man.

But the scrawling is hardly Pollack's sole legacy in a nearly seven-decade career in basketball. He was the first to track a player's blocked shots, rebounds, minutes played and dunks. The term "triple-double" for a player netting 10 or more points, rebounds and assists in a game-Pollack's doing. These days he even charts which NBA players sport tattoos.

Pollack is the Philadelphia 76ers' director of statistical information, a paltry title for the unofficial historian of all things throughout the National Basketball Association's existence.

"The word 'legend' doesn't appropriately describe Harvey," NBA Deputy Commissioner Adam Silver tells JTA. "He's really the heart and soul of the 76ers, a walking encyclopedia of NBA history and a testament to the family nature of this league."

Pollack, vigorous at 91, remains a Philadelphia courtside fixture, scrupulously keeping each game's statistics without so much as eyeglasses to assist. Pollack, in fact, predates the NBA, going back to the Warriors' Basketball Association of America debut in 1946.

Not even Philadelphia's basketball-orphan status during the 1962-63 season-the Warriors moved to San Francisco and the 76ers had not arrived from Syracuse-could interrupt Pollack's 68-year tenure in pro basketball: That season he handled public relations for NBA doubleheaders.

He's on a T-shirt streak, too, never wearing the same one twice and nearly all donated to the cause. When a reporter visited this month, Pollack was on T-shirt day number 3,817. With pride he says the Guinness Book of World Records people told him he'll own the record-actually no one sought it pre-Pollack-as soon as the streak actually ceases.

The native Philadelphian has outlived his wife of 58 years, his four siblings, three basketball arenas, the many newspapers for which he wrote and even Chamberlain. He's at his 76ers office daily and works every home game, a must greet for referees and opposing coaches, players and trainers. Non-game nights he attends movie screenings and theater performances and visits restaurants for a society column he has penned for decades.

Lara Price, a 76ers executive, says Pollack goes to nearly every concert-most of them rock and roll-at the Wells Fargo Center, the team's home. When seats aren't available, he unhestitatingly noodges the arena's owner, Ed Snider, for tickets.

Pollack is a member of the Naismith Memorial Basketball Hall of Fame, the Philadelphia Jewish Sports Hall of Fame and several others, but the ultimate tribute may have been the 76ers presenting fans with a Harvey bobblehead a few years back.

He's loved sports since growing up with his immigrant parents, Louis and Rebecca, both dressmakers, on Dauphin Street, in the northeast section of Philly, not far from where he now makes his home. The family lived a few blocks from Shibe Park, home of the Philadelphia Athletics, and Pollack and his friends would sneak into the baseball games there with youth groups admitted for free.

But basketball has been Pollack's preferred sport since his senior year at Temple University, when he served as the hoop squad's manager and started logging statistics the coach hadn't thought to keep.

"They call me the last of the Mohicans because I'm the only one left in the league since [the NBA] started," he says. "There's no clone of me hanging around, so I'm one of a kind."

Employing Harvey hyperbole is as acceptable for ex-76ers as Pollack's flaunting prohibitions against staffers asking players for autographs, which he does for his interns.

"When you mention 'dinosaur,' you've got to put his picture next to it," says Hall of Famer Julius Erving. "He's refused to become extinct."

Erving's former 76ers frontcourt mate, Bobby Jones, offers, "People say that athletes are freaks of nature, but he may be, too."

Larry Brown, the one-time Sixers coach who was inducted into the Naismith Hall with Pollack in 2002, says discussing NBA history with Pollack is "like going to graduate school." To Jim Lynam, also an ex-76ers coach, Pollack is "a gem ... one of a kind."

Moments before a 76ers game earlier this month against the Los Angeles Clippers, Pollack, sporting a full gray mane and slightly stooped over, ambles down the corridor from his cramped office-one littered with papers and paraphernalia-settles into his scorer's table seat, straps on earphones and a microphone, and goes to work.

He long ago developed an intricate code to convey information to a colleague across the court for input into a desktop computer.

The colleague recording the data for statistical posterity? His 67-year-old son, Ron, who has worked with dad since 1962. On the night of Chamberlain's wondrous game in Hershey, Pa., it was Ron who ran copy to the Western Union desk for transmittal to the wire services.

Ron's son Brian, 40, works nearly every game with them from near the basket, calling out turnovers and substitutions. Not even the elder Pollack can monitor everything.

But Pollack's basketball work extends beyond courtside. Silver's "encyclopedia" metaphor is literal, too, since the "Harvey Pollack NBA Statistical Yearbook," published annually since 1966, remains a staple of offices throughout the league.

As a player, Jones says he'd open the book and wonder how Pollack conjured such arcana as who had the most 360-degree dunks or the most offensive rebounds in the first quarter of a game-the latter mark belongs to Jones.

Besides basketball, Pollack's No. 1 is Reba Greenberg Meyers, a 91-year-old widow known as Ritzi. (One of his T-shirts reads "Harvey is Ditzy When He Sees Ritzi."). They began dating in 2004, set up by a mutual friend.

For one with a hard drive's memory, Pollack hadn't realized until their first date-at a restaurant in Voorhees, in southern New Jersey, he notes-that she belonged to his Simon Gratz High School Class of 1939.

Something else Pollack doesn't know: What became of the iconic "100" sign and the ball Chamberlain used to score his 99th and 100th points that night in a victory over the New York Knicks.

Says Pollack: "Biggest mistake I made."

There haven't been many.