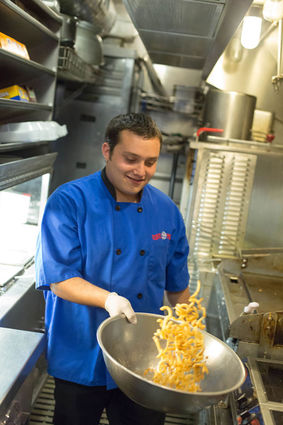 Matt Loory was working at the First Watch restaurant on Rt. 436 in Altamonte Springs, training to become a manager, when Le Cordon Bleu College of Culinary Arts in Orlando, where he graduated with honors in 2012, called him and said that Ringling Bros. had a job opening for a cook, was he interested?

Longwood resident Loory was interested. "I grew up seeing Ringling Bros. every year in Orlando with my family and fell in love with the circus."

Just 23 years old, his future already looked bright right here in Central Florida, but this was a once in a lifetime opportunity. Why not? "I took a leap of faith and joined the show," he said enthusiastically.

That was January 2013. Three months later, he "threw his hat into the ring" for the Pie Car manager position, and hit the "rails" running as the youngest manager in the circus' 144-year history.

Loory acquired his love of cooking while spending every major Jewish holiday in the kitchen with his mom helping her make matzo balls and peeling potatoes for latkes. His parents (Josh and Fern Loory), foodies themselves, gave him the opportunity to try foods from around the world. Little did he know how much this would prepare him for his future career.

As exciting as this opportunity was for him, it wasn't easy to leave the security of his hometown. He graduated from Lake Brantley High School and attended Congregation Beth Am, where he was involved in B'nai B'rith Youth Organization. Plus, he loved his mom's brisket, noodle-kugel and potatoes.

He knew he'd be gone from home for two years on tour, seeing the country in ways most of the world would never know, all on the largest privately-owned train in the world. Still, the lure of the circus combined with his passion for culinary drew him to "run away and join the circus."

Loory now enjoys managing a staff of five cooks and preparing cuisine from more than 25 countries-serving 1,500 meals each week to more than 300 performers and crew members of the "Greatest Show on Earth" while traveling city to city by train.

"This is one large community without boundaries-a city without a zip code," said Loory of his new home.

What is his favorite meal to prepare? This was a hard question for Loory to answer. After a few minutes consideration, he said it had to be the Asian-style meatloaf with ginger and sweet chili sauce, served with wasabi mashed potatoes.

The Ringling Bros. Barnum & Bailey show "Legends" will be in Orlando at the Amyway Center, Jan. 9-12. What is Loory planning to do while here? Believe it or not, he has a dentist appointment (his mom made it for him) and he has jury duty, which he hopes to be released from. But most of all, he hopes to have some of his mom's home-made brisket and potatoes.

Way2Go Matt! We miss ya @ First Watch but are also proud of ya! Keep up the good work homey!