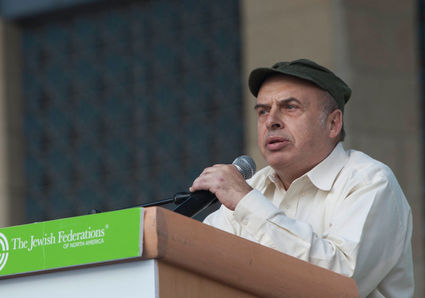 Jewish Agency chief Natan Sharansky called for the release of Jonathan Pollard in his speech to the Jewish Federations of North America General Assembly in Jerusalem, Nov. 12, 2013.

Pollard's case "isn't disconnected from the U.S. spying on Israel," Nachman Shai, the co-chairman of the Knesset caucus to free Pollard, told JTA. "It turns out, it's part of life. And what he did is a part of life."

Knesset Speaker Yuli Edelstein accused the United States of "hypocrisy" for holding Pollard, who as a civilian U.S. Navy analyst spied on the United States for Israel, even as it spied on Israeli leaders. Transportation Minister Yisrael Katz said he wants the Israeli government to demand Pollard's release and insist the United States cease its espionage operations in Israel. And opposition leader Isaac Herzog said Pollard's punishment "has long passed the limits of sensibility."

"We hope that the conditions will be created that will enable us to bring Jonathan home," Netanyahu said last Sunday at the Israeli Cabinet's weekly meeting. "This is neither conditional on, nor related to, recent events, even though we have given our opinion on these developments."

When Pollard's crimes first came to light in the mid-1980s, his activities seemed like a major act of betrayal given the close alliance between Israel and the United States. But the Snowden revelations show that spying by the United States and Israel was a two-way affair, prompting a new round of calls for the release of Pollard.

Support for freeing Pollard represents a rare point of consensus in Israeli politics, with 100 Knesset members among the 120 signing a letter asking Obama to release Pollard, according to Shai. Eighty members signed a similar letter last year.

But Ronen Bergman, an expert on Israeli intelligence who is writing a history of Israel's spy agencies, says Israeli pressure is unlikely to convince President Obama to free Pollard in the short term.

"I'm quite positive that it won't happen tomorrow because otherwise it will look as if the president of the United States accepts the claim that following the recent revelations from Edward Snowden, he should parole Jonathan Pollard," Bergman told JTA. "But once the Americans were caught with their hands in the cookie jar, it paints the Pollard issue in a different color."

The clamor for Pollard's release has grown steadily over the past two years, with the late U.S. Sen. Arlen Specter, former Attorney General Michael Mukasey and former Secretary of State George Shultz expressing their support.

Jewish Agency for Israel Chairman Natan Sharansky, a vocal advocate for Pollard's release who raised the issue last month in his speech to the General Assembly of the Jewish Federations of North America, told JTA that American calls for the release of Pollard hold more sway than Israeli advocacy.

"What really matters is what American public opinion and American professionals and the American Jewish community feel," Sharansky said. "I want to be cautious, but I think we passed a checkpoint. Now we don't see people thinking [Pollard's release] is unthinkable."

Supporters of Pollard have long argued that his three decades of incarceration for spying on an ally is excessive. Revelations of American espionage may strengthen the rhetorical argument on Pollard's behalf, they say, but the merits of the case for release stand on their own.

"Without any connection to the recent news, there's no question that the time has already come when the Israeli public and senior officials want this tragedy to come to an end," said Adi Ginsburg, a spokesperson for the advocacy group Justice for Jonathan Pollard. "American justice and shared values between the two countries, like justice and mercy, necessitate Pollard's freedom."