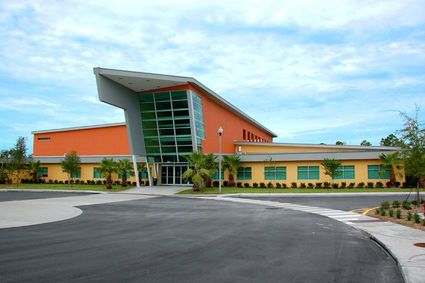 When the Jewish Community Center's Jack & Lee Rosen Southwest Orlando campus celebrated its grand opening in fall 2009, leaders of the project envisioned a day when its sparkling new halls would be bustling with activity.  After five years of building community, strengthening family life, and promoting Jewish values, JCC leaders are celebrating its early success.

"When I first started, the JCC's Rosen campus was literally an open field and dirt, plus preschool portables we had been using since 1994 on the property of the Southwest Orlando Jewish Congregation," said Bonnie Rayman, who began as the center's branch director in early 2009.  "I am incredibly proud of Southwest Orlando's Jewish community whenever I pause to consider our rapid growth."

That growth of the JCC's Rosen campus has been rapid on multiple fronts, in its first year:

• the Early Childhood Learning Center was home to 89 children; this past school year, the number reached 132.  Many of the classrooms now have waiting lists.

• just eight children were enrolled in its new J University after school program; the number has increased to 48 today.

In addition to the growth since the first year:

• In its first season of Camp J, the campus hosted 175 campers; last summer that number had grown to 405.

• The monthly Saturday Night Out children's program has grown 150 percent over the last two years, averaging 50 children per month.

• Attendance at programs for children who are out of school for closures or winter/spring breaks has doubled in size since 2010.

To accommodate this remarkable growth, the JCC has planned an expansion of its property over the next year, increasing in size from 34,000 to 54,000-square-feet. The additions will include early childhood and after school classroom additions, a teen center, an active gaming room, music rooms, and a state-of-the-art auditorium/theater.

"We know that strong JCCs create strong Jewish communities, and the JCC's Rosen campus has transformed Southwest Orlando's Jewish community," said Scott Richman, JCC's board president and a charter member of the Rosen campus. "The JCC has played such an important role in my family's Jewish journey, and I know that this campus has also led to so many more members of our community embarking on Jewish journeys of their own."

In fact, the research has shown that the JCC's Rosen campus is a standout in inspiring Jewish journeys.  Research conducted by the JCC Association in 2011-2012 showed that the JCC's Rosen campus was rated number-one in the country for the degree of its Jewish impact, when compared to its peer group of similarly sized JCCs.  This was measured by respondents' answers to the degree to which they have developed a broader perspective of the Jewish community, a greater appreciation for Jewish values, and a deeper connection to their Jewish identity.

They were also ranked first in the country on measurements of their ability to create friendships amongst their members, as well as how well their staff engaged members in informal conversations.

"The only thing that makes me more excited about how far this Jewish community has come is how far it still is going to go," Rayman said.  "If our growth trends continue, the future of our JCC is very bright."