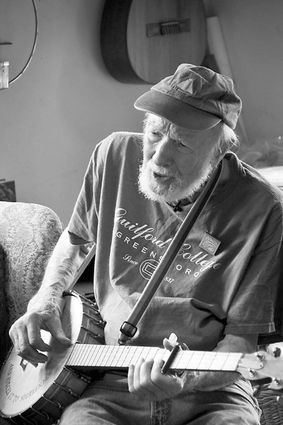 Pete Seeger, the iconic American folk singer and composer of such notable standards as "If I had a Hammer," "Where Have All the Flowers Gone?" and "Turn, Turn, Turn" passed away on Monday, Jan. 27 at age 94. Seeger died of natural causes at New York-Presbyterian Hospital, his record company, Appleseed Recordings, said.

Seeger was well known for his liberal politics, working as an environmentalist, protesting against wars from Vietnam to Iraq. He was sentenced to prison for refusing to testify to Congress about his time in the Communist Party.

In 2010, Seeger visited Israel for a concert in support of the co-existence oriented Arava Institute which works on joint Israeli-Jordanian-Palestinian environmental projects.

At the time, many pro-Palestinian organizations signed a petition calling on Seeger to withdraw from the Arava event, prompting Seeger to take a clear stand on the boycott movement.

"My stand is supporting the boycott of Israeli products. I don't know much about the artistic boycott taking place, but I understand the financial boycott. I don't think there will be a human race here in another 50 years unless the entire world finds a way to communicate-whether it's with pictures or music or food or sports. Words may come later, but we have to find a way to (talk) in some way," he said at the time.

When asked to clarify his position, Seeger told JTA that he "probably said" he supported the boycott, but added that he was still learning about the conflict and his "opinions waver with each piece of information" he received.

Regarding the Arava Institute event he said he though it was "very important," and added that such co-existence initiatives "should exist all over the world," JTA reported.

Some time before the Arava Institute event, JTA reported the Seeger claimed he was resisting calls from the BDS movement to cancel his participation in the event, citing the need for dialogue.

"I understand why someone would want to boycott a place financially, but I don't understand why you would boycott dialogue," JTA quoted Seeger as saying.

What many 60s followers of his folk music may not realize, he is also remembered for his recording of "Tzena, Tzena, Tzena," a BillBoard No. 2 Top Hit for Seeger's band, The Weavers.

"Legendary songwriter, singer, and political activist Pete Seeger's 'Tzena, Tzena, Tzena' was a great example of the power of music not only to entertain but to bring people together," said Milken Archive of Jewish Music founder Lowell Milken.

"Tzena, Tzena, Tzena" was originally written in Hebrew in 1941 by Issachar Miron who had fled Poland as a teenager and was, at the time, serving in the British Brigade in then-Palestine. Miron composed the melody; Yehiel Chagiz wrote the lyrics; and in 1946 Julius Grossman wrote a "third part" to the song, which is the version Seeger heard.

"Until I started living in New York at age 19-20," Seeger recalled in an interview for the Milken Archive in 2000, "I knew so little about Jewish culture, it's shameful."

It was in New York that Seeger befriended some Jewish musicians. "And it was from one of these young men that I learned 'Tzena, Tzena' in 1948," he said.

As Seeger explained, he performed the song with The Weavers in a Greenwich Village nightclub, not knowing anything of the song's history or even its meaning. The famous bandleader Gordon Jenkins heard them, and then arranged for them to record the song with English lyrics he composed. "Tzena, Tzena, Tzena" went to No. 2 on the Billboard Top Hits (the other side of the single "Goodnight Irene" would go to No. 1).

Tzena is a rousing call to "join the celebration" with "people from every nation" who'll "dance the hora" until "dawn will find us laughing in the sunlight dancing in the city square."

In 2000, the Milken Archive interviewed Seeger and Miron during the recording of a new version of "Tzena, Tzena, Tzena," a three language, English-Hebrew-Arabic version which the two composed a few years before. Seeger and Miron wanted the message of Tzena to be relevant for a new generation.

Seeger was known as much for his music as his activism over the years, whether in defiance of the McCarthy era blacklist, or in support of civil rights, environmental causes, the anti-war movement and international disarmament.

"Pete Seeger was one of those very rare individuals who lived fully in accord with his beliefs," said Milken Archive Curator Jeff Janeczko. "At a Madison Square Garden concert held in honor of his 90th birthday, Pete took to the stage wearing jeans and a baseball cap and led the massive crowd in a sing-along, unwilling-even in this context-to differentiate himself from the thousands in attendance."

Pete may be gone, but he left an indelible mark on the world and inspired generations of musicians for whom music and social activism are inseparable. Like the familiar refrain of one of his favorite songs, his soul goes marching on.

Despite his impact on American music, Seeger won just one Grammy for an album, 1997's "Pete" in the best traditional folk album category. He also received a Lifetime Achievement Grammy in 1993.

In 2007 Springsteen won the best traditional folk Grammy for "We Shall Overcome- the Seeger Sessions," a collection of songs popularized by Seeger.

Seeger's wife Toshi, who he married in 1941, died in 2013. They lived in upstate New York and had three children.