If someone were to say "Have you been doin' the 'Hubbly Bubbly'?" Locals near Edgewater and Par would know this is referring to the newest healthy-fast-food shop in the area. Owners Mark and Heather Unger and her father, George Joubran, opened Hubbly Bubbly last September and they have not slowed down since the doors opened. The concept is not new-a falafel shop. But the unique way the food is prepared and served makes it decidedly different-and the constant flow of customers proves it.

The mere thought of falafels and hummus conjures images of Mid-Eastern cuisine, served in a Greek or Middle-Eastern atmosphere. However, this falafel shop-from its unique name to its collegiate look to the made-to-order menu-has given the age-old falafel a fresh appeal.

And customers have it their way here. Have a pocket sandwich, salad bowl or hummus bowl with chicken (traditional shawarma-style, slow-roasted with a blend of special seasonings) or with lamb and steak (which is skewered with alternate pieces of lamb and rib-eye steak, and tastes nothing like the processed Greek gyro in other restaurants) or the famous falafel-a smaller version of its namesake (they call them pucks), made with fresh chickpeas and a bit of turmeric, lightly fried till crispy and moist.

"We make them smaller so they fry up quickly and we can make them as they are ordered, so they are always fresh," said Mark Unger, who is also a partner and director of Interactive at Push Orlando.

Joubran is the hub of Hubbly Bubbly and makes sure everything is always fresh and the servers are trained correctly. A chef for 37 years, he came to the United States in 1970 from Nazareth, Israel. Much of his training though, he admits proudly, was from helping his mother in the kitchen. One of those specialties he learned from her is mujadarrah. We call it lentils. Of course though, like everything else in Hubbly Bubbly, Joubran makes his lentils with quinoa instead of bulgur wheat. "It makes it lighter in taste," he said. And he is right about that. 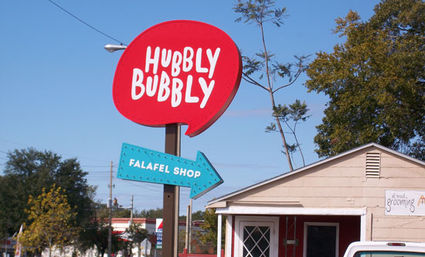 Hubbly Bubbly is a new falafel shop in town.

One can't leave Hubbly Bubbly without trying the Crispy Cauliflower. This reporter does not like cauliflower, however, I ate every bit of my serving. Tossed with a five-spice seasoning and lightly fried, it really was melt-in-your-mouth delicious.

But the piece de resistance is the Mazel Tots. Like tator tots, these crispy balls of shredded potato tossed in that five-spice seasoning are the best round latkes in the world.

Hubbly Bubbly also offers catering services, and in the short time it has been open, has catered school events, the College Park Jazz festival and a Rollins College fraternity party.

Hubbly Bubbly is located at 3405 Edgewater Drive in Orlando. Its website is http://www.hubblybubblyfalafel.com.